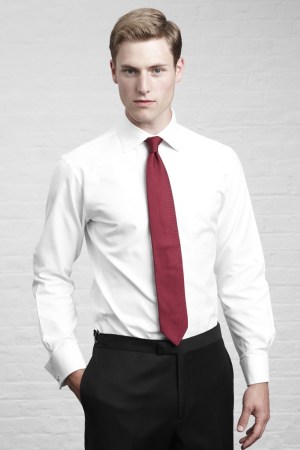 “We offer as many as 12 variations on the classic white shirt to suit every taste and every occasion,” said London-based buying and merchandising director, Melanie Traub, who flew in for the opening. “You do a classic fit with a double cuff and button cuff, a slim fit with a double cuff and button cuff, and then you do one with stretch and superslim, one without stretch and superslim. And then you have your evening shirts, which are white….You’ve got the wing-tip collar in various fits, then the textured fabric….There are so many available options, which is why we have a whole wall in our stores devoted to the white shirt.”

It’s also the best-selling product in all stores around the world. “It’s still the classic-cut, two-fold cotton button-cuff double-cuff white shirt,” she added, which retails in South Africa for 1,295 rands (around $157 at current exchange).

The Johannesburg store carries a thorough range of merchandise, from shirts and ties to boxers and socks to cuff links and pocket squares, as well as a small women’s collection. “Basically, the shirt and everything that goes with it,” said Mickey Walker, executive manager of Thomas Pink in South Africa. Together with his father and brother, Walker runs the family business, McCullagh & Bothwell, which has the local franchise for Thomas Pink. Like Thomas Pink, McCullagh & Bothwell boasts quite a long and storied heritage. Established by two Irishmen in 1896, McCullagh & Bothwell began as a men’s apparel store in the Kimberley mining fields. Today, the Hyde Park flagship is better known as a purveyor of quality school uniforms, with a small selection of men’s wear, which includes, among other brands, Gant. Walker is a fourth-generation Bothwell.

Walker, who does the buying, admitted that “one of the trickier challenges of being in the Southern Hemisphere is that we’re buying a season behind.” He was in London in mid-April for the fall 2012-2013 buy, for delivery in October, which will be springtime in South Africa. “It makes it easier from some perspectives because we have time to see what’s worked and what hasn’t worked.”

Pricing is another challenge. “The import duties in South Africa are so high — 45 percent on clothing — and a lot of people who know Thomas Pink will travel internationally to buy the shirts. So we are really working to keep our prices competitive. But I think our consumer is broadly educated on that and understands.” He is counting on the immediacy of stock availability to win over customers who otherwise might have waited until they traveled to London to purchase their shirts.

The store also offers several amenities, such as “Pink Privileges,” which include ironing your new shirt while you wait, altering shirts if necessary and monogramming them as required. “And there’s also a very elegant gift packaging service included.”

Asked to describe the typical Thomas Pink man, Traub said “there’s not any one type. I think we catch men at different ages and stages in their lives. It could be the young guy out of university who wants his first interview shirt; it could be when he gets married, so he wants that special dress shirt for his wedding. Or it’s the ceo of a company who’s at the other end who wants our Imperial shirt, which is over 3,000 rands ($363), because it feels fabulous and he feels fabulous in it.”

The Johannesburg store is the 90th Thomas Pink store worldwide. The brand has experienced significant expansion since being acquired by LVMH Moët Hennessy Louis Vuitton 10 years ago. Walker said he hopes to open more stores within South Africa, but it’s all a matter of finding the right location. Among the locations that would be most desirable are Sandton, a Johannesburg suburb, where Hackett, Ben Sherman, Paul & Shark and Zara have stores. Cape Town is also a possibility, but that would be “a seasonal market.”