The women's contemporary brand is favored by celebrities including Gigi Hadid and Chrissy Teigen.

The Arias store in SoHo.

The pandemic is not stopping some independent brands from taking the plunge into retail. While a lot of the larger chains are closing stores, smaller companies view this time as a potential opportunity.

That’s the case with Arias, the buzzy luxury contemporary women’s brand founded by Nina Sarin Arias and favored by Gigi Hadid, Chrissy Teigen, Priyanka Chopra and Gabrielle Union, among others.

On Monday, Sarin Arias will open her first store, a 1,500-square-foot boutique at 466 Broome Street in Manhattan. This marks a milestone for the brand, which was founded in 2017 as a direct-to-consumer label. In addition to its own web site, Arias is sold on Net-a-porter, Moda Operandi and at other high-end retailers as well as through a series of trunk shows.

“It’s always been a dream to open a store and it means even more to me to do so in this unprecedented time,” Sarin Arias said. “I chose to open our doors and show support for the city as our collections are made in New York. It’s an important moment in my brand’s development and I couldn’t think of a better location than in SoHo, which is an intersection of fashion and art. The Arias woman has always shopped our brand online and attended our trunk shows. I am now able to share the world of Arias with my clients — an experience she has been waiting for.”

The store’s interior is designed to reflect the brand’s minimal, yet feminine approach to design. Black galvanized steel rods are suspended above marble slabs throughout the perimeter of the space. Corinthian columns and a tinted mirror wall at the rear of the store lend visual interest and there is a central seating area. 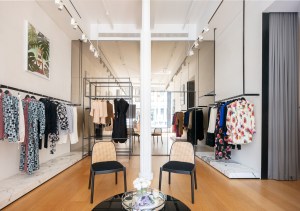 The Arias store is popular with female celbrities.

The store will also appeal to art lovers by collaborating with New York galleries to present exclusive exhibitions. For the opening, Arias is partnering with the Andrew Kreps Gallery to host an installation of six works by German contemporary artist and photographer Annette Kelm that will be available for purchase in the store through October.

Arias isn’t the only brand opening a store in downtown Manhattan this summer. The New York-based denim and lifestyle label 3Sixteen has opened its first unit at 190 Elizabeth Street in NoLIta that will serve as both a retail store and a showroom. The store portion measures 625 square feet and the showroom, which the company is referring to as “The Den,” is 500 square feet.

The store is intended to pay homage to the brand’s New York roots with its old-growth and reclaimed wood, textured hand-troweled walls and century-old brick that are intended to complement the handmade garments. The location was designed by Studio Meadow, which also designed the brand’s other store in the Arts District of Los Angeles that opened in 2016.

At this point, the store is open by appointment only because of safety concerns during the pandemic, but it is expected to become more accessible to the public in the future for walk-ins. 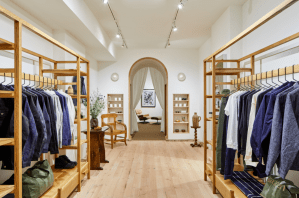 The 3Sixteen store on Elizabeth Street is its first in New York City.

Andrew Chen, founder, said: “We signed the lease in December not knowing that a pandemic was on the horizon. Once reality set in this spring, we were determined to move forward to complete the space despite the challenges facing the retail market. Our reasons were manifold: as small businesses near and dear to us were forced to close due to COVID-19, we felt it was important to be able to play a part in rebuilding the landscape of downtown New York City, to provide a destination that was worth visiting.”

Chen added that, “Despite new challenges, in-person retail is so important to our brand because the nuances of our clothing can often be lost in online stores to those who might be new to what we do. The hand of a fabric, the stitch count of a seam — these details can only be appreciated when seeing and trying the garment on. 2020 has become a year of survival for so many brands; our hope is that we will become a space of rest and respite in a changed retail landscape downtown.”

Joining these two, Japanese brand Nanamica has opened its first store in the U.S. at 125 Wooster Street. Initially scheduled for an April debut, the store opening was pushed back due to the pandemic. The store, which was designed by Japanese architect Taichi Kuma to resemble a beach house, measures 1,200 square feet and is only the second in the world. It first opened in the brand’s hometown of Tokyo last October. In addition to the high-tech outerwear the brand it is known for, Nanamica’s New York store carries its collaboration product with The North Face Purple Label. 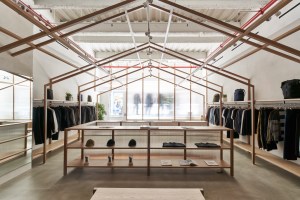 Nanamica means One Ocean, All Lands and was founded by Eiichiro Homma, who worked for Goldwin in Japan for 18 years designing marine and outdoor apparel before creating the brand in 2003 with Takashi Imaki. Nanamica uses high-tech fabrics and modern silhouettes to create a collection of pieces that blend fashion and function.