In a half century, a humble five-and-dime grows to be the world’s biggest company. 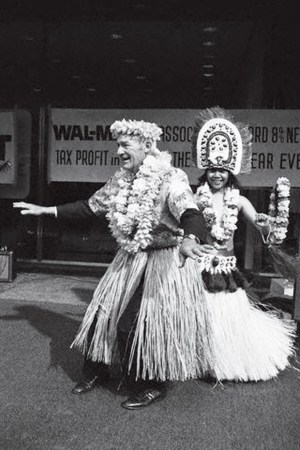 1918: Samuel Moore Walton is born in Kingfisher, Okla. His family moves to Missouri and Sam graduates from the University of Missouri at Columbia in 1940 with a B.A. in economics.

1942-45: Sam serves as a captain in the U.S. Army Intelligence Corps. He marries Helen Robson in 1943 and they have four children: Rob, Jim, John and Alice. After completing his military service, Sam works for J.C. Penney in Iowa and opens a variety store in Newport, Ark.

1968: The first Walmart stores open outside Arkansas. The company has sales of $12.6 million.

1969: The company is officially incorporated as Wal-Mart Stores Inc. on Oct. 31.

1972: Wal-Mart shares begin trading on the New York Stock Exchange on Aug. 25 under the symbol WMT.

1983: The first Sam’s Club opens in Oklahoma. People Greeters are introduced in all locations, and the company acquires Woolco stores in the U.S.

1984: Sam Walton does the hula at high noon on Wall Street, making good on a promise to associates after the company achieves a pretax profit of 8 percent for the previous fiscal year.
David Glass is named president of the company.

1988: The first SuperCenter opens in Missouri. Glass is named chief executive officer. The company finishes the decade with stores in 29 states.

1990: Wal-Mart acquires McLane Co. of Temple, Tex., a grocery and food service supply chain firm, paving the way for dominance in the grocery business. It becomes the nation’s largest retailer.

1991: The company’s first international unit opens, in Mexico, and it expands into the northeastern U.S. It acquires Western Merchandisers of Amarillo, Tex., and introduces Sam’s American Choice products.

1993: Wal-Mart International becomes a separate division. The company has its first billion-dollar sales week, and expands to 49 states.

The last state to be without a Wal-Mart is Vermont, which fights a “big box” location, largely on concerns of environmental impact and the threat to local merchants. Instead, Gov. Howard Dean suggests opening in struggling downtowns. Wal-Mart opens in vacant stores in Bennington, Rutland and Berlin before finally getting a big box in 1995.

1996: The company enters China through a joint venture.

1997: Wal-Mart is the largest private employer in the U.S., with 680,000 associates, plus an additional 115,000 international associates. Sales exceed $100 billion. Wal-Mart replaces Woolworth on the Dow Jones Industrial Average.

1998: Wal-Mart buys Wertkauf in Germany and enters South Korea via a joint venture. It introduces the Neighborhood Market concept in Arkansas.

1999: With more than 1.1 million employees, the company is the largest private employer in the world. It acquires Interspar in Germany and Asda in the U.K.

Wal-Mart makes a move on urban downtown areas, with a proposal to open a 200,000-square-foot SuperCenter near downtown Dallas. But fueled by a powerful grassroots campaign, the plan is derailed when the Dallas Plan Commission unanimously rejects the radical two-story concept store, labeling it an “oversized gorilla.” Wal-Mart had ambitions of developing a smaller SuperCenter that would allow it to penetrate downtown areas. These locales are among the last places in which it hasn’t yet made a huge imprint.

2003: Wal-Mart creates an office of diversity, and assigns one of its top-ranking women, Charlyn Jarrells Porter, to run it.

2004: The gender-discrimination lawsuit filed by Betty Dukes and five other women in 2001 is granted class-action status. The certification  is challenged but affirmed in 2010.

Wal-Mart launches Metro 7, a contemporary line it hopes will give its $25 billion fashion business a trendy edge. It gets off to a brisk start and is expanded before being scaled back after a few years.

2006: After its attempts at trendier styles yield limp results, Lee Scott tells Wall Street the company is going back to basics across several categories, including apparel. “We have to get better at fashion basics, not what I would call high fashion,” Scott said. “There’s a tremendous opportunity without stepping out to the next level, which is so dangerous for anyone to get into unless you’re a high fashion company.”

2007: Wal-Mart International opens its 3,000th store, in São Paulo, Brazil, and reaches an agreement to set up an operation in India.

The company scores an exclusive deal with Iconix Brand Group Inc. to carry the Ocean Pacific and Op brands, but discontinues the George ME capsule line designed by Mark Eisen.

The retailer unveils a wide-ranging environmental initiative — Sustainability 360 — that aims to push suppliers to rethink business practices in packaging, product development and carbon emissions. The goal is to reduce packaging by 5 percent by 2013, and with the consequential decreases in shipping costs, save the supply chain $3.4 billion. Among its environmental initiatives, it has also opened a high-efficiency SuperCenter prototype, replaced 100 million incandescent bulbs with fluorescents, and launched zero-waste programs.

The company says it will pay $352 million to $640 million to settle 63 class action suits charging that the retailer cheated employees of hourly pay by forcing them to work off the clock. The lawsuits were filed in federal and state courts between 2000 and 2007.

Miley Cyrus, aka Hannah Montana, teams up with Max Azria, chairman, designer and chief executive officer of BCBG Max Azria Group, to create a junior line for Wal-Mart called Miley Cyrus and Max Azria. She is the second major teen country star Wal-Mart has linked with in the last few months. The retailer already carries an exclusive line under the label L.E.I. by Taylor Swift.

2010: Still trying to break into New York City, Wal-Mart develops an arsenal of store formats, some smaller or re-merchandised without categories not as important to urban areas, like lawn and garden.

2011: Wal-Mart is out to befriend tween beauty consumers with a tech-meets green cosmetics line called GeoGirl. Aimed at girls 8 to 12 years old, it is merchandised in a tween beauty department that includes Disney Princesses Lip Smackers, Lotta Luv, Fab Beauty and Crayola.

The company rolls out shopping apps to help consumers plan their store trips in November. Its iPhone app allows users to speak into their phones to create a shopping list. Lists can be updated via barcode scanning or manually as well. Shopycat, the company’s first social shopping app, gives Facebook users the ability to find gifts for friends based on their posts, tastes and interests. The apps were built with technology Wal-Mart acquired with social media startup Kosmix — now called @WalmartLabs.

Wal-Mart says its e-commerce business in China is expected to quadruple to $300 billion by 2016 and its online business in Brazil has grown twice as fast as the market in the past two years.

The company’s Facebook page has 13.2 million “likes.” It encourages consumer interaction with a “What’s On Your Mind” section, where consumers provide feedback. It also has nearly 150,000 Twitter followers and more than 2,200 tweets.