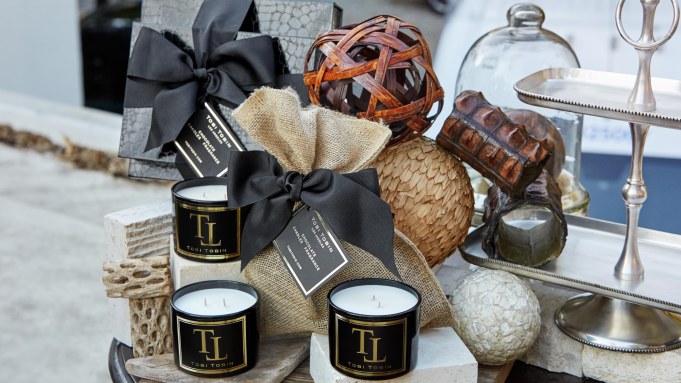 “They’re the perfect partner for me. The first day at Century City…it was like a crazy Sprinkles counter,” Tobin said referring to the cupcake confectionary with a cult-like following. “[The brand’s] taken off. Women want that. They want things under $200. It’s affordable luxury.”

The Bloomingdale’s deal may also mark a turning point for the business, which boasts a loyal following of celebrity clients such as Taylor Swift, Keanu Reeves, Reese Witherspoon, Kate Hudson, Robert Downey Jr., Chelsea Handler and Leonardo DiCaprio. While Tobin is currently at Bloomingdale’s exclusively, her eventual goal would be to land her line in more retailers.

Tobin, who got her start in Hollywood as a personal assistant, later went on to interior design and about eight years ago decided to launch her own brand of affordable luxury home goods. She sold everything from lighting to linens, along with candles and chocolates. The launch of her fragrances later followed.

Tobin currently sells direct through her online shop as well as a 300-square-foot store in Brentwood, which she said served as a litmus test for the smaller store format she now has in Bloomingdale’s.

“I built out the shops-in-shop model there [in Brentwood],” Tobin said. “I incubated it. I got to know the business.”

While the focus for the business currently is on the Bloomingdale’s launch, Tobin said, she’s not opposed to opening more of her own stores. However, she’s not interested in large stores anymore, which she did try her hand at when the business first launched.

“I would only stay in the small retail concept. I don’t feel that I have the necessity for the huge flagship stores anymore,” she said. “I got really inspired on a trip to Capri…. All the stores there are 200 and 300 square feet and I got a lot of inspiration seeing all these luxury brands represent themselves in such a small space and yet are doing a powerful business.”

The company earlier this month also launched a box subscription for her candles and chocolates along with a redo of the Tobi Tobin web site. There are four box options ranging from $64 to $175.

“Everybody’s got a subscription [business],” Tobin said. “It’s the Millennial generation. If it doesn’t come in a box, they’re not going to buy it. They should call it the box generation. The whole world arrives in a box. I wanted to bring that experience to these young girls. That’s the new retail. It’s the whole 360: You have to participate in Bloomingdale’s. You have to have your own retail. You have to have a subscription box. I’m trying to be a brand that’s giving my customer the ability to receive my product in any way that they want.”