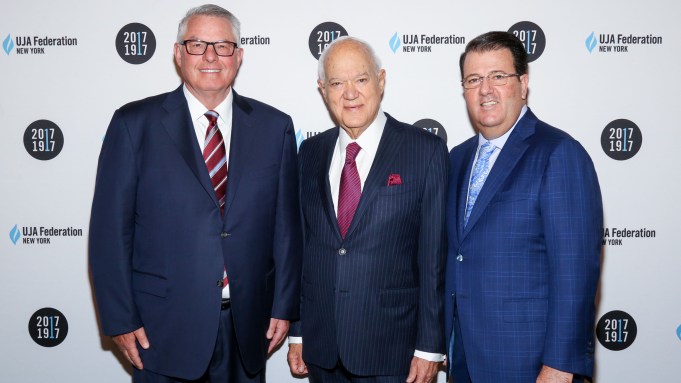 At the UJA-Federation of New York fashion division’s annual luncheon, it was all about philanthropy, patriotism, praise for the fashion industry and family.

“I love the U.S. I am most grateful for this country and its people,” said a proud and humble George Feldenkreis, executive chairman of the $3 billion Perry Ellis International, who was honored at Thursday’s luncheon at The Pierre, along with his son, Oscar Feldenkreis, vice chairman, president and chief executive officer of Perry Ellis, and Tom Kingsbury, chairman, president and ceo of Burlington Stores.

For the Feldenkreis family, it was an emotional day, with Oscar getting choked up introducing his father as “his best friend and business partner” and “the reason our family is so involved in so many philanthropies.”

The elder Feldenkreis delivered an inspirational and very personal speech describing how as a 15-year-old in Cuba his father insisted that he take an after-school commercial skills course teaching him typing, shorthand and bookkeeping. Those typing skills led to his first job at the UJA office in Havana where he learned about the importance of fundraising.

As a poor immigrant from Cuba, escaping the Communist Revolution, Feldenkreis found opportunity and success in private enterprise which would have been impossible in Cuba. After settling in Miami, he started Carfel Inc., an importer of Japanese motorcycle and automotive parts. He later launched Supreme International which evolved into Perry Ellis International. “Whether American by birth or American by choice, we are all proud to be Americans,” Feldenkreis said.

“George, my accomplishments pale in comparison to yours,” Kingsbury told the crowd of 600. He said he wasn’t one to boast but that he was extremely gratified by Burlington’s philanthropic efforts which include causes that fight cancer, support women’s heart health and adopt-a-classroom programs. “Companies can only be as strong as the communities they serve,” said Kingsbury.

The event raised $1.4 million for UJA-Federation’s network of more than 80 core partners and hundreds of other nonprofits, which collectively touch the lives of millions of people each year. UJA-Federation’s mission is to care for those in need and rescue those in crisis situations — both Jews and non-Jews. The organization also supports the Kaplan House in Manhattan, a home for troubled teenagers, and the State of Israel. The group, celebrating its centennial this year, was founded in 1917 by visionaries seeking to help when New York City was taking in waves of immigrants and plagued by poverty.