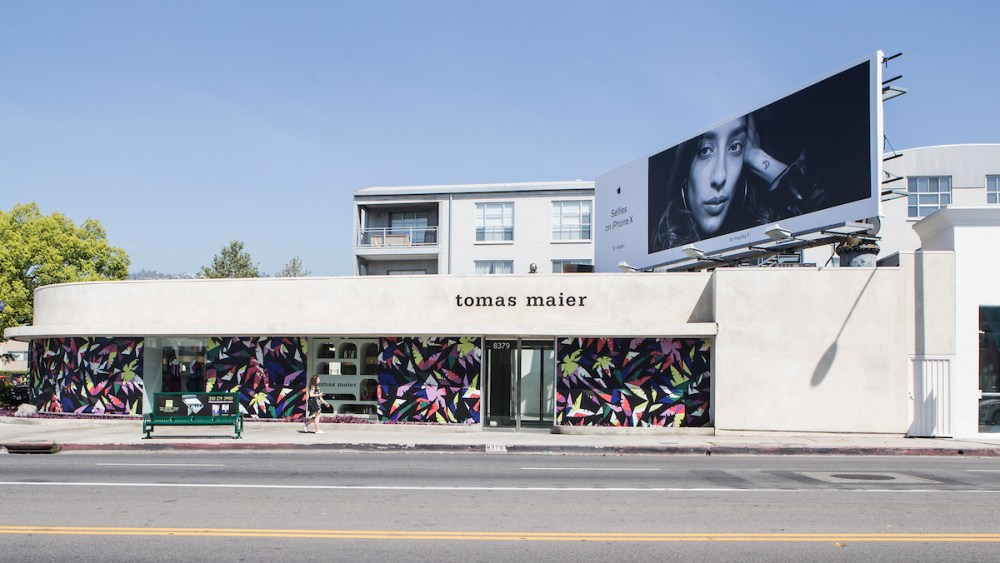 Temperatures were in the mid 70s in Los Angeles last week, when Tomas Maier chief executive officer Laurent Claquin noted the city’s bright blue skies and mused (jokingly) that perhaps Kering should move its offices West. And, why not, as the Tomas Maier brand pops up on Melrose Avenue on Monday for a three-month stint featuring all things cruise and spring.

“It was very organic and natural. Tomas Maier always loves California. He loves the nature and outdoors. He’s an outdoor person…and spends a lot of time here,” Claquin said. “It was really natural also to be closer to our West Coast client to test the market.”

The executive, who was named ceo of Tomas Maier last summer, also heads up the Americas business for Kering, which entered into a joint venture with Maier in 2013.

Establishing the temporary shop was partially pragmatic with the building’s former occupant, Alexander McQueen, moving to new digs on Rodeo Drive as Tomas Maier, the brand, sees strong momentum. With three months left in the building, a pop-up made sense and, as Claquin observed, temporary shops are indeed “part of the retail landscape right now.”

If the door does well, the ceo said, “why not,” when asked whether the company would consider something more permanent in the Los Angeles market.

“[We’re] always open to new opportunities and maybe one day expand and have a point of sale on the West Coast,” he said.

“No, there is no plan right now [for more company-owned stores]. We have a lot of potential for organic growth,” Claquin said. “We’re growing through all the different channels of distribution. We also have our e-commerce platform, which is doing well.”

Indeed, the online boutique delivers to 100 countries and continues to be a growing channel for the business, according to Claquin. The business is also focused on growing its wholesale channel with specialty stores, he added.

With eight months under his belt as Tomas Maier ceo, it’s still the early days, but much has been done in less than a year’s time, to hear Claquin tell it.

There have been three focus areas since he took the helm, beginning with the product and the collection. The company now presents twice a year with four delivery windows.

“We think it’s the new way of making business in the fashion industry now and we have great feedback from all our partners,” Claquin said.

Collaborations, such as those with Puma last year and Uniqlo this year, have rolled out, with Claquin teasing more to come on that front.

A second area of focus has been around storytelling of the brand, with a third strategy that the ceo called “the right distribution of today,” whether that be related to e-commerce or a more “fun format” such as the pop-up.

While Claquin acknowledged pop-ups as one way the retail landscape is shifting, certain aspects of the business remain a constant.

“It’s a tough question [of what’s to come for retail] because I don’t have a crystal ball. I think retail is still absolutely key versus e-commerce because I think people want an experience,” he said. “That’s what we see and that’s why we keep our flagship and our stores because I think the customer experience is more important than ever and the relationship with the sales associates — the human relationship — is more important that ever.”