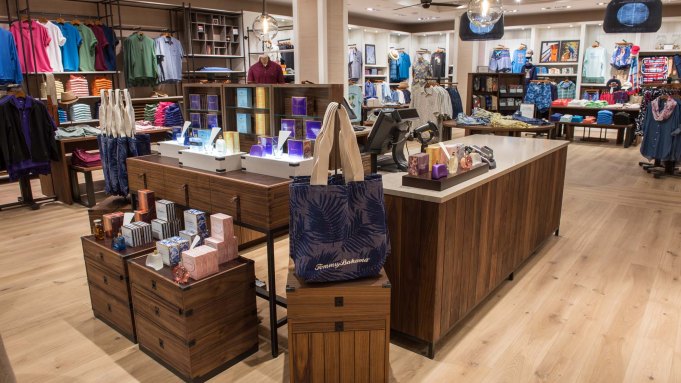 Tommy Bahama is getting serious about Canada as a growth vehicle.

Three years after buying back its Canadian license from Jaytex Group, the island lifestyle brand has opened its second-largest store in the country at CF Sherway Gardens in Toronto.

The 3,500-square-foot store is the first in Canada to sport the company’s Modern Beach House design, which features a neutral color palette, clean lines and open space with dark metal accents, oak flooring and warm wood tones. The exterior sports louvered awnings and a facade in teak.

The store represents “where we want to take the store and online presence,” said Doug Wood, chief executive officer of the Oxford Industries division. He said that by buying back the license, the brand is now able to “bring the full brand experience” to its customers in Canada. “The Canadians are some of our most loyal fans,” he said.

Wood said that although Tommy Bahama had worked with Jaytex since the late Nineties, “there’s a difference working with a licensee and doing it yourself.” The stores that Jaytex operated “looked like we did eight or 10 years ago. They built stores in the old style with a narrow focus. They were silk- and floral-based and they had none of the new product that we have in the States.” That includes the new men’s and women’s denim collection that is rolling out to stores for this fall.

So Tommy Bahama is working to remodel the existing stores in the market while “opening larger footprints” in premium centers, Wood said. With Sherway, there are now 11 stores in Canada. “A bigger store allows us to show our entire product line.” In June, Tommy Bahama opened a store at the Chinook Centre in Calgary, which Wood said is “performing up to expectations.”

Wood said that due to a softness in the Canadian currency versus the U.S. dollar, consumers there have cut back on their traveling. And while their business may be missed in some American resort locations, this has also led to increased sales in their home country.

“My Canadian business has been really good because they’re staying home,” Wood said.

To further capitalize on this, Wood said Tommy Bahama will keep a close eye on which stores are up for lease renewals and then either remodel or relocate depending upon their performance. “We’ll see if they’re right for us now,” he said, adding that some have been in their present locations for many years.

“Between the department stores and the digital environment, there’s crazy shopping behavior and things are changing,” he said. “The companies who win today are either focused on the commodity world or the branded world. We’re in the branded world and we have a loyal following, so that puts us in the cat bird’s seat.”

He said “wholesale is not enough to keep you alive today,” so Tommy Bahama will continue to increase its retail presence, both in Canada and the U.S. The brand currently operates 143 stores in the U.S., many of which also include restaurants.

Wood revealed that in November in Coconut Point, an outdoor mall in Estero, Fla., the company will test a new retail concept, the Tommy Bahama Marlin Bar, a 1,000-square-foot restaurant/store concept with counter service and a bar. Customers can order an umbrella drink and munch on coconut shrimp “and still be in a shopping environment,” he said. In the other locations, the restaurant and store are separate.

“We’ll open one and see how it goes,” he said. “We think it’s going to be a fun and unique experience.”