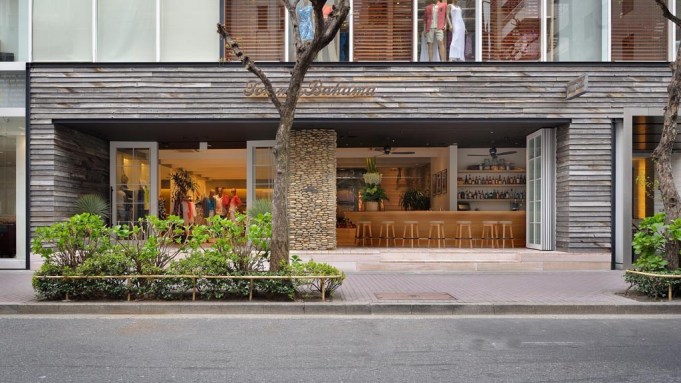 TOKYO — Tommy Bahama is entering the Japanese market with two new stores, one of which includes a restaurant and bar, a first for the company outside the U.S.

“[The brand] relates to Japanese culture — this kind of quiet solitude in a place where it’s about escape,” said Rob Goldberg, the company’s senior vice president of marketing. “So, I think the foundations of the company certainly resonate with the Japanese consumer.”

Tommy Bahama opened a store in a mall in Yokohama last week, and is following with a two-story, 5,995-square-foot flagship in Tokyo’s Ginza district on Saturday.

Entry into the Japanese market is part of the brand’s broader international expansion push, following openings in Hong Kong, Macau and Singapore.

“Now that we’re in these key markets, [our strategy is to] start to develop the brand and get the messaging out to our guests,” said Doug Wood, president and chief operating officer of Tommy Bahama, adding that the company is also gathering information on where it hopes to expand next. “We think it’s Japan, but we do these tests and then realize we have a lot to learn from the market itself.”

Wood said the company doesn’t currently have a timeline for subsequent stores in Japan or elsewhere in Asia, but hopes there will be more openings, as well as the addition of a Japanese wholesale business.

“Japan, unlike pretty much any other market with the exception of China, has the potential for a large expansion,” Wood said. “You can see it in the market itself and in the size of the consumer market.”

But Wood also noted that the size of the Japanese and Asian markets is no guarantee of success.

“When you go to Tokyo, Hong Kong, even Singapore, [the cities are] so heavily retailed compared to the States. The amount of retail in these environments is staggering, so you better stand for something or you won’t differentiate yourself,” he said. Wood went on to say that he sees potential for Tommy Bahama in Japan because he doesn’t see any other brand like it in the market.

The Ginza store features an open layout and beach-inspired design elements, including pickled oak floors, a wall of rum barrels, and planters suspended by pulleys over the staircase. The outer facade employs reclaimed wood from the U.S., and the wall anchoring the stairs is covered in river rocks that were laid by hand by artisans. Both the bar on the first floor and another in the second-floor restaurant are made of wood in a crescent shape reminiscent of a boat.

The store will carry between 30 and 35 percent of its total men’s styles and 90 percent of the company’s women’s offering. There will also be some exclusive products, including a beach chair and towel set retailing at 10,000 yen, or about $100. All of the apparel at the store will offer Tommy Bahama’s international fit, which was developed after extensive fit studies in Japan and is also used in other Asian markets.

“It goes right back to how we build the brand,” Wood said. “It’s quality and fit, and if you don’t have those two key ingredients, you’re going to fail.”

The Ginza store will also include a small section of Tommy Found items, which are vintage pieces that represent the image and personality of the brand. These include a blue glass bar set for 48,700 yen, or $491, and a leather-covered Gucci decanter from the Fifties for 60,000 yen, or $605.

The restaurant on the second floor of the retail space is Tommy Bahama’s 15th in the world. It has 50 seats and will serve a coastal-style menu utilizing local, organic ingredients wherever possible.

Tommy Bahama is planning additional store openings in Chicago on May 3 and in Sydney at the end of May. It will also add a bar to its recently opened Hong Kong unit next month.