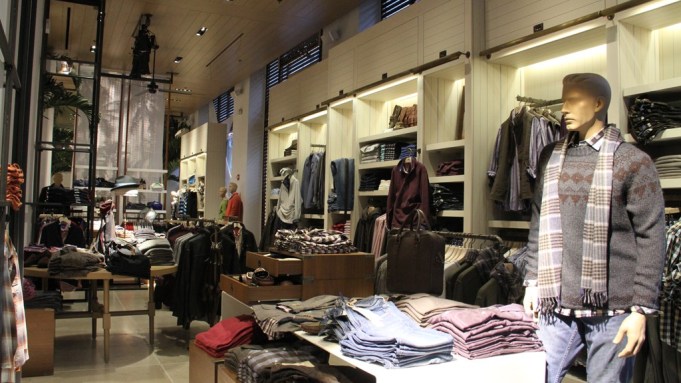 On Saturday, the island-inspired brand will open the doors to its largest and most ambitious store to date, a 13,000-square-foot, three-level store and restaurant on Fifth Avenue and 45th Street in the Art Deco-designed Fred F. French Building. The store features a new design concept with nearly every feature chosen specifically for a New York City debut.

“We want the customer to feel like this is an urban resort,” said Rob Goldberg, senior vice president of marketing for the Tommy Bahama Group, a division of Oxford Industries Inc. “We want this to feel like a little oasis. We want people to forget the hustle and bustle of Manhattan and come in here and chill out. It feels somewhat insulated and every detail we selected we put through the lens of ‘Is it relaxing?’” This ranges from the plants to the mannequins to the music.

But for a brand whose slogan is “Life is one long weekend,” the store was designed to appeal to Type-A New Yorkers.

Key design features include wooden shutters constructed from former planks of the Coney Island boardwalk that the company purchased when they were torn up and replaced by plastic and concrete. “We bought two-and-a-half miles in linear feet and created shutters,” Goldberg said. “We’re using them to connect the upstairs and downstairs. Everything in here is custom; nothing is off the shelf.”

Customers can enter from three doorways, two on Fifth Avenue — one into the men’s department and one into the bar — or from 45th Street. The two Fifth Avenue entrances are placed on either side of the main entryway into the French building, offering passersby a bird’s-eye view into the Tommy Bahama retail experience.

Men’s wear is merchandised front and center on the retail side of the store. Jeans, sport shirts, sweaters and accessories are offered and the centerpiece is a 14-foot fallen elm tree that has been repurposed into a display table. Drum-dyed cowhide is used on fixtures as well as on the seat cushions in the restaurant, and there are floor-to-ceiling walnut dressing rooms and brass countertops. Floors are limestone and the music has a tropical theme.

Moving back from Fifth Avenue, there is a section devoted to Tommy Bahama Found, a selection of vintage trinkets ranging from shaker glasses, cigar holders and old barware to vintage decanters.

“We’re doing some unique product here,” Goldberg said, pointing to the half-zip sweater being offered in cashmere at this location only. There are also vintage Wrangler jackets that have been reworked to include a Tommy Bahama tropical-theme lining.

A punched metal screen leads from the men’s sportswear area into the Tommy Bahama Relax shop, where linen shirts, men’s swimwear and knit polos are sold. Across the aisle is the first women’s product with a wall of swimwear and cover-ups.

Moving further back, the company created a “cabana” for women where dresses, knit and silk tops and sweaters are sold. Goldberg said the product sold in this space can be adjusted depending upon the season. Beyond that, dressier women’s merchandise is offered.

A flight of stairs leads to a mezzanine, where women’s jeans and sweaters are sold in a cozy area complete with its own fitting room and seating area.

Of course, it wouldn’t be a Tommy Bahama store without the requisite palm trees, which are strategically placed throughout the space.

The upstairs was formerly an office, but when the company leased the space, it cut a hole in the ceiling to create a mezzanine that is now being used as selling space. Lighting is “theatrical,” Goldberg said, and designed to emulate sunlight.

To access the second floor, the company built an elaborate circular staircase. There is a black-and-white collection of vintage beach-related photographs on the stairwell that will be used as the interior of the menu as well. The company also commissioned an artist to create two tropical-themed works that included thousands of hand-strung seashells dangling from a piece of driftwood.

The retail component of the store will open before the restaurant, whose debut was delayed by Hurricane Sandy. Goldberg expects the restaurant to open in about two weeks.

The restaurant, which accounts for around 50 percent of the space, will have 160 seats upstairs and another 20 in the Marlin Bar downstairs. In addition to the cowhide seating, the restaurant will feature oak tables and vintage grain-sack coverings on cushions and pillows. “They’re 100 to 200 years old,” Goldberg said. “But they’re indestructible.”

Tucked into the back of the second floor restaurant area is a corporate meeting space that can accommodate groups of up to 40.

The Marlin Bar, which has its own Fifth Avenue entrance, features a collection of oak barrels behind the bar where rum will be aged. “And at any point in time, there will be three cocktails aging in oak as well,” Goldberg said. The top of the bar is antique copper and there’s a collection of wing-back chairs covered in the vintage grain sacks in the rear for a more-private experience. A specially commissioned mural of a tropical rainforest decorates the rear wall.

Goldberg declined to say what the store cost to construct or what it is expected to generate in annual sales. “We’ve been working on it for two years,” said Goldberg, who is also a competitive triathlete. “It’s like the Ironman. I can finally see the finish line.”

He said because of the restaurant, volume can be double or triple that of a traditional apparel specialty store. “We feel it should be one of our busiest stores,” he said.

This marks the 105th store for Tommy Bahama. Next up are units in Hong Kong and Tokyo. “It’s important that each location has a sense of place. We don’t stamp these out or follow a template,” he said.

On Wednesday, the whole management team at Oxford was in town to preview the store including retiring chief executive officer Hicks Lanier, his heir Tom Chubb, along with Terry Pillow, ceo of Tommy Bahama, and Doug Wood, the division’s president.

Pillow said the brand continues to perform well and is looking forward to a strong holiday season. “The first two quarters were terrific, but holiday can make or break us all,” he said. Nevertheless, he believes the new store will do well. “We’re building an urban resort for our brand. For the relaxed island lifestyle, we have the niche to ourselves.”

Lanier summed it up this way: “This is a huge investment for us. But it’s an investment that will give us benefits for years to come. We’re just happy we had the opportunity to do this.”