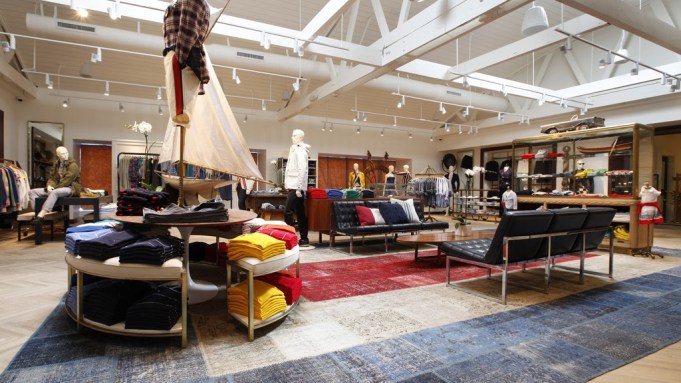 LOS ANGELES — Tommy Hilfiger views the opening of its flagship on Robertson Boulevard Monday as not just adding another store, but as a relaunch of the brand on the West Coast.

Hilfiger last had a major store here in 2001, when it closed a 20,000-square-foot Rodeo Drive unit, its largest at the time, because of a failure to match the brand’s urban reputation with the luxury positioning of the street. But so much has changed since then: Hilfiger established itself abroad as a formidable lifestyle player, linked with Macy’s, was acquired by PVH Corp. and reignited momentum in the U.S.

“We have really become a global lifestyle brand. We were an American brand in America. We were affordable, but we weren’t affordable luxury or premium. Now we have moved into that area, and we did it first in Europe,” said the designer. “As a result of the success of our upgrading product in Europe, we decided to do that in America.”

“Over the years, the brand around the world has gone through such an incredible elevation, initially outside of the U.S. market, but, in the last five years, in a stepped-up pace, the repositioning in America is taking root as well,” said Fred Gehring, the company’s chief executive officer. “We are well-positioned in New York. L.A. has fascinated us for a while and, when this location came up, we said, ‘Let’s do it.’”

Hilfiger’s U.S. retail profile was significantly enlarged in 2009 with the opening of its 22,000-square-foot flagship on Fifth Avenue in Manhattan. Still, the brand’s retail operation remains small in the U.S., with only four freestanding units, excluding the Los Angeles store: two in Miami and two in New York. The 6,600-square-foot Robertson store both physically — it’s on a highly trafficked corner at Beverly Boulevard — and symbolically heightens the brand’s visibility on the West Coast.

“The brand’s presence on the West Coast has not been as strong as it’s been on the East Coast or in Florida. We think it is really time,” said Hilfiger. Gehring said, “Historically, the West Coast has been weaker for Tommy Hilfiger and for preppy brands in general, but there is also a much greater presence that we’ve had in the East Coast. To a degree, there is also an issue of education, showing the customer what we are all about.”

The brand has been cautious not to make the same retail mistakes it did more than a decade ago on Rodeo Drive. Hilfiger and Gehring asserted that Robertson is a much better fit. “It is in between aspiration and accessibility,” said Hilfiger. Elaborated Gehring, “If we go into a street that is heavily dominated by the true luxury brands and we sit around them, then we are not in our sweet spot. When we sit in a street that is heavily dominated by the Zaras of the world, we tend to be a little bit too expensive and high profile. We sit a little bit in between.”

Developed by Hilfiger executive vice president Trent Wisehart in partnership with O’Neil Langan Architects, the store design is meant to marry the brand’s classic American aesthetic with a laid-back West Coast attitude. The exterior is wrapped with tiles in Tommy Hilfiger’s signature navy framed with antique brass trim. The interior is separated into two main rooms, the first concentrating on women’s and the second on men’s and children’s. The rooms are light and airy, with sunshine streaming in, white walls and light wood herringbone flooring. The second room features natural exposed wood trusses, a high ceiling and Quonset hut roof line.

An eclectic array of midcentury furniture and vintage objects are situated throughout the store. Following the nautical theme of Hilfiger’s spring campaign, old anchors decorate the spaces above shelving, and an oversize anchor and sail are in the windows. A vintage guitar and movie reel have been placed in the VIP dressing room at the rear of the store, a usual touch for a Hilfiger location intended to enhance its prestige.

“That building was an old car garage initially, so we didn’t want to glam it up too much,” said Hilfiger. “We wanted to keep it a little bit rough and rugged, and we wanted to restore a little to its original, although we obviously didn’t want a car garage. We wanted to make it a modern classic.”

Giving the store a Hollywood touch, Hilfiger has chosen select items from his personal collection of memorabilia to put on display. He detailed, for example, that there would be jeans and boots that Marilyn Monroe wore in the 1961 film “The Misfits” shown at the store, as well as a dress sported by Tina Turner and boots from Elton John. “Our image as a brand is connected to pop culture and pop culture is really part of what we stand for. I’d like to be able to celebrate it in the store,” said Hilfiger.

He noted there are studio services to accommodate celebrity stylists and film production needs in the store. He acknowledged red-carpet dressing has never been a “mainstay” of the label, but he feels the brand suits the current crop of actors and actresses. “Young Hollywood is really all about a casual approach to fashion. Yes, they wear gowns and tuxedos on the red carpet, but, in everyday life, these people are very casual in their approach. This sort of relaxed lifestyle that exists in California has spread worldwide,” said Hilfiger.

The store will carry an extensive selection of men’s, women’s and children’s wear, swimwear, bags, footwear, sunglasses, watches, fragrance and denim. “We’ve really chosen the best and the best of all the merchandise worldwide,” said Hilfiger. In addition to that merchandise, the Robertson store will have an exclusive capsule collection of four red-carpet tuxedo styles and one-of-a-kind vintage pieces such as watches from the Fifties, silk dresses and naval shirting.

Sensing the store’s opening as an opportunity to gain traction with customers here, the company has gone beyond the opening itself to raise awareness. It tweaked the ad images of the Hilfigers to have a Hollywood theme, switching the Hollywood sign to a Hilfigers sign. There are three L.A. billboards dedicated to Tommy Hilfiger, including a prominent one at Sunset Boulevard and Holloway Avenue that will stay up all year. The brand also brought the Jeep Grand Wagoneers pictured in its ads to the West Coast, and Freida Pinto and Amanda Seyfried are set to catch rides to stylist appointments in them.

The brand has been on somewhat of a flagship tear of late. From 2010 to 2012, the company planted flagships in Tokyo and Paris, and two in London. Overall, it has been focused on spreading retail internationally, and Gehring mentioned its retail has mostly covered the top cities in Asia and Europe, and is on the edge of covering them as well in South America. Worldwide, the brand has some 1,100 stores in 90 countries.

Turning its attention to the U.S., Gehring said the brand could open expansive stores in cities like San Francisco and Chicago, and is considering opening smaller 3,000- to 5,000-square-foot stores to round out its retail portfolio in American cities. “I don’t know yet whether that will be a vehicle that over the next five years will gain substance. We have to find the right size, product,” said Gehring of the smaller, regional freestanding units. “This is something that we are only now starting to plan and do some trials with, and it is far from a certified strategy for the future.”

Tommy Hilfiger’s recent performance in the U.S. is laying the groundwork for a broader domestic retail base. In the third quarter, the last for which there is financial information, PVH reported Hilfiger’s sales in the U.S. increased 7.7 percent to $385.2 million, while its international sales dipped nearly 4.4 percent to slightly less than $448.4 million. International sales constituted about 54 percent of Tommy Hilfiger’s $833.6 million in total revenues for the quarter.

“We feel the period of time where there were international successes and, on the other hand, there were struggles in the United States, that is history,” said Gehring. “The brand across the world is in balance, and my expectation is that it will remain that way in the foreseeable future.”

The Robertson Boulevard flagship will be a real test to see if Tommy Hilfiger’s retail resonates on the West Coast and further retail is justified. Although Gehring wouldn’t discuss sales projections for the store, he is confident it will do well. “We are very excited with this store opening. We like this location,” he said. “We like the fact that we can enter Los Angeles in this location, and we are optimistic about the financial performance, but we will wait and see what happens.”