Tommy Hilfiger is embracing virtual reality with a customer experience in select stores that offers a three-dimensional view of the designer's fall 2015 runway show. 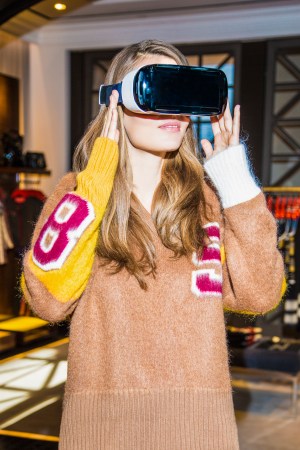 The company’s embrace of virtual reality has resulted in an immersive experience for customers at select Tommy Hilfiger stores and wholesale partners worldwide. Shoppers at the Fifth Avenue flagship on Tuesday will be the first to view the Hilfiger collection fall runway show in three dimensions and with a 360-degree perspective, followed by Hilfiger locations in London, Paris, Milan, Amsterdam, Düsseldorf, Florence, Zurich and Moscow.

Viewing the runway show requires wearing a Samsung GearVR device, which has straps that go over the top and across the back of the head. The resolution isn’t perfect, but the quality of the picture is expected to improve over time.

The VR experience creates the impression that the viewer is sitting in the front row at the Park Avenue Armory, where Hilfiger’s show was held, its American football theme evident from the green field under the models’ lace-up shoes and illuminated by stadium floodlights. If the viewer looks to the right, he will see guests at the show “sitting” next to and behind them. The runway show also offers glimpses backstage and there is a vantage point showing the moment the models step onto the runway.

“Through virtual reality, we’re now able to bring our one-of-a-kind fashion show to the retail setting,” said Hilfiger. “From the incredible set and music to exclusive backstage moments, consumers will be able to watch the clothes move and see the collection in the original show environment — it’s a compelling and interesting elevation of the traditional shopping experience.”

“Retail is changing,” said Daniel Grieder, chief executive officer of Tommy Hilfiger, a subsidiary of PVH Corp. “In the past, it was about turnover per square meter. Now, as a brand, we have to make sure the customer gets entertainment and make sure there’s some newness and ‘wows’ per square meter. Virtual reality is a part of our future life. We’re using it to open the door on a unique part of our world.

“The days of ‘hello, how are you’ and ‘how can I help you’ are gone,” Grieder added.

The concept was created in collaboration with WeMakeVR, developers of 360-degree, 3-D virtual reality experiences. The runway show was captured with the WeMakeVR-Falcon, a proprietary camera. Avinash Changa, founder and ceo of WeMakeVR, said, “The quality will improve over time. Daniel embraced the technology at a very early stage.” But technological advancements are occurring rapidly. “We could be months away from better quality,” he said.

Grieder called digital “the new normal, and it will be implemented in all aspects of our business. Digital will conquer the world. We created a digital showroom last year. Now, VR is just one more point in this digital world.”

He declined to divulge the cost of the VR experience. “Once it’s installed and you have to roll it out, it’s affordable,” he said. “The return on investment you will have will be in perfect balance.” If the concept takes off, he said that “instead of having one VR station, you will have 10 stations. It will definitely have an impact in terms of surprising customers. How much of an impact it will have on the numbers, I don’t know yet. That’s not our first intention.”

Hilfiger believes it’s the first company to use VR as a customer experience in stores. “We always like to pioneer things,” said Grieder, who claimed to be “very connected” in his daily life. “Seventy-five percent of my reading is done on a device. At home, on the weekends, when I’m drinking coffee is when I read the newspaper. Everybody today wants to be real-time-informed.”

The company continues to make omnichannel strides. “We have tests in several stores where we combine click-and-collect,” Grieder said. “We’re merging online and store. Where the customer’s buying at the end shouldn’t matter.”

Sitting on a couch on the third floor of the flagship, Griener looked at some down coats hanging on a display. “Going online in the store you can widen the whole offer,” he said. “There are at least five more colors of down coats, not just black and navy. Sales associates with iPads have a link to the stock. We’re testing different technology in stores. You have to always be open-minded.”