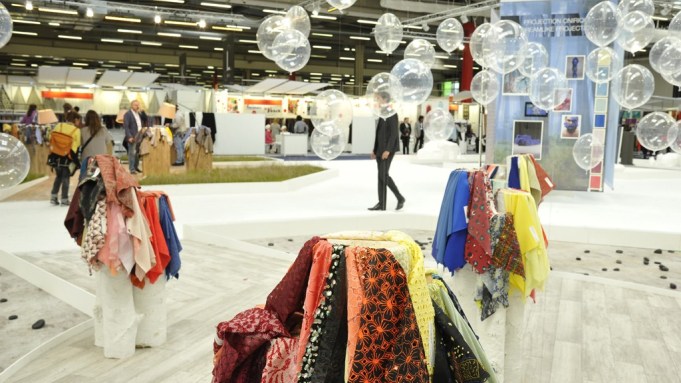 PARIS — Corporate social responsibility is fashion’s focus more than ever.

Amid discussions of business conditions and trends, the talk of the recent round of textile and sourcing shows here centered on sustainability, as well as where goods are manufactured. Première Vision and fabric sustainability consultancy C.L.A.S.S. cohosted a seminar with speakers including Rossella Ravagli, Gucci’s head of corporate social responsibility, and Max Mara fashion director Laura Lusuardi, while at Texworld, some of the busiest stands were those offering eco-friendly fabrics.

At PV, Italian printing mill Miroglio Textile was appealing to major players with its eco-credentials that include reducing its water footprint and introducing environmentally friendly printing techniques.

“In the past two years, we have reduced our water consumption by more than half, from 800 million liters in 2011 to 350 million today,” said global commercial director Chiaretto Calo. “Big players like H&M, with whom we are in discussions, are very sensitive to this. They have started a program to reduce their water consumption and are looking for suppliers to help them achieve this.

“I see a very good trend,” said Mozart Tseng, president of Mozartex, China’s largest supplier of fabric made from Lenzing’s Tencel fiber, showing at Texworld. “Twenty years ago, when one meter of Tencel cost $12, no one would buy. Now it’s one-third of the price,” adding that the financial crises have helped raise awareness for doing business responsibly. “Now I sell one million meters to H&M. Before 2010, it was zero.”

Miroglio’s Calo said one of the reasons for the company’s digital output surpassing that of rotary printing for the first time this year was that costs have come down, making more-sustainable options economically viable.

Tseng of Mozartex, which offers a wide range of Tencel fabrics, including denim, corduroy, silk and fake leather to companies including Burberry, said the technology has improved in recent years, so that more middle to high-end brands are hopping on board.

Max Mara chose the roundtable at PV to reveal that it would introduce Saluzzo Yarns’ Newlife yarn, made with recycled plastic, in its fall 2013 Weekend collection.

“Eco is the way we do business now at Marks & Spencer,” said Mark Yates, the U.K. retailer’s head of innovation and quality for men’s wear, visiting Texworld. “We are always looking for new innovative things, and Tencel is quite impressive. I saw a coating here that I have not seen before.”

At the luxury end of the market, a marked return to all that is “Made in Europe” was tangible.

“There’s this renewed interest in Europe because soon brands will be selling the emperor’s new clothes — made of nothing — because Chinese mills are also closing down by the shed load,” said Laurent Garigue, owner of the U.K. mill of the same name. “This is all very worrying for a European or American fashion company. Made in Europe is really important through necessity.”

Luis Izard, representing Spanish wool producer Hijos de Rafael Diaz at Texworld, said, “Design is the only way to survive for a textile company located in Europe because it’s impossible to compete with Pakistan and China.”

This creativity factor stood out, especially at PV.

Designer Andrew Gn, meanwhile, cited Malhia Kent and Luigi Colombo, winner of the Handle prize at the PV Awards, as his favorite collections. “Luigi Colombo’s luxurious backing is a great way of mixing natural fabrics with tech,” he said.

Malhia Kent was showing off a patented process where hems, pockets and buttonholes are woven into the fabric itself, cutting production costs, chief executive officer Eve Corrigan explained.

“There is an increased recognition of exceptional products,” Corrigan said. “It is important that Made in Europe succeeds, so I thought about what I could offer that is perhaps a little more expensive, but is compensated by reduced production and styling costs.”

“We opened an office in China two-and-a-half years ago,” said Corrigan. “It has become our fifth market in that time. It’s a very creative market.”

Antonio Cerruti, president of Lanificio F.Lli Cerruti, agreed, “A growing number of Chinese companies are coming to Italy to produce a portion of their products, to get better quality.”

At the value end of the market, higher labor costs and stricter pollution controls in China have shifted the production focus to other Asian countries such as Pakistan and India, but also Bangladesh, where cheap labor has spurred rapid sector growth, according to attendees at Texworld. The sector continues to grow in importance despite the apparel factory tragedies that have taken place there and claimed the lives of more than 1,200 people.

“We are investing in technology and equipment to stay competitive,” he said.

Talukder said while the bulk of his business is concentrated in Europe, he expects volume with U.S. customers will double between 2014 and 2020.

Mohsin Bokhari, director of Lahore-based Sapphire Finishing Mill, noted that precarious conditions in Bangladesh were one of the reasons for an uptick of business in Pakistan.

“We don’t have many garment factories, but there is a lot of talk now to expand and take up that share,” Bokhari said. “People have started to move to other destinations because they feel very uncomfortable with all that happened in Bangladesh.”

In terms of volume, Sapphire, which supplies fabric to major retailers including Gap and C&A, saw an increase of 30 percent year-on-year, with 65 percent coming out of the U.S. and the rest from Europe. The weaver said fabrics with more compact structure, such as dense twills that can compete with denim, were particularly in demand.

Turkey, which is now the second-largest exhibitor at Texworld after China, is moving in quickly, with its geographical advantage in Europe.

“You have to be very quick in fast fashion,” said Fatih Korkmaz, ceo of Bursa-based FBN Tekstil.

Korkmaz, whose clientele is 70 percent European, said he saw a 20 to 25 percent increase in sales last year, adding, “This year there will be more.”

China, meanwhile, has its sights set on pushing domestic consumption.

“Eighty percent of our textile production has the domestic market as its destination,” said Lin Yun Feng, vice chairman of the Textile Industry Chamber of Commerce. “This hopefully clears any confusion that China lives off exports. On the contrary, we are restructuring and opening the market for imports.”

At the fairs, the ongoing weak market in Europe was balanced by improved U.S. business and an increasing number of Chinese customers, driving an overall upbeat outlook among exhibitors and buyers.

At PV, which ended its three-day run Sept. 19 at the Villepinte exhibition center, visitor numbers grew by 14 percent year-on-year to 52,800.

“It has been a long time since we saw such strong growth,” said Première Vision ceo Philippe Pasquet.

“In the U.S., we feel very strongly that things are picking up again,” said Sandrine Bernard, executive vice president of Solstiss USA. “It has been an excellent year.”

NEXT: Top Trends at Première Vision >>

• Modern Tweed: Whether it was Malhia Kent’s patented pre-shaped tweeds or a tweed woven with bright ribbons and sequins from Ratti Donna, contemporary updates on this classic stood out.

• Leather: Developments included an embossed leather with a different print on each face or printed woven leather, while Leathertex developed an embossed geometric imitation leather.