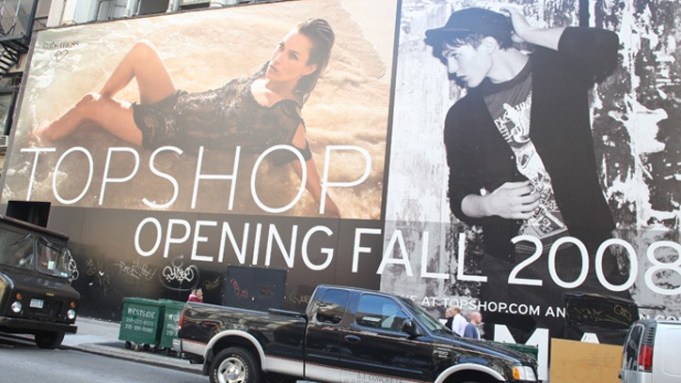 Topshop is now going to love New York in the springtime.

The British fast-fashion retailer, which originally planned to open a 40,000-square-foot flagship in SoHo this fall, has postponed its entrance into the U.S. market until March because of construction delays at the store, located at 478 Broadway.

“This has been a logistical nightmare,” Sir Philip Green, Topshop’s owner, said bluntly. “America is a new territory for us and we have to get it exactly right. This store can’t be a nine out of 10 when it opens; it has to be a 10 out of 10. So we’re delaying the opening until around mid-March.

“It has nothing to do with what’s going on with the economy,” Green stressed. “This is totally to do with the complexity of this project. It’s basically a rebuild of an entire building and we want to make sure we do it right.”

During a walk-through of the four-floor site, Green pointed out the series of hurdles the builders have encountered — from the time it takes to order and receive escalators to delays in getting permits from the city to tweaks of the design. For example, the plan originally was to have a staircase in the back stretching from the basement to the second floor, but Green since has decided to fill it in.

“You can only know these things once you see them,” he said, peering down into the hole. “It just removes too much trading space from the floors.”

Green admitted the original timetable to enter the U.S. market was an ambitious one. However, he said the hiccups left little choice but to delay the opening once he saw how the project was progressing.

“We maybe could have pushed things and opened in mid-November, but what’s the point for 20 days of business?” he said, adding there would then have been logistical and merchandising issues in terms of how much inventory to order and what season to carry.

The delay isn’t an indication the retailer is revising its plans to expand in the U.S. Green said he remains on the hunt for additional sites in New York. “Nothing has changed,” he said. “I’m looking at two or three other things, but I’ve not seen anything in New York that I’ve said ‘wow’ over. There’s been some adjustment in pricing, but things are still expensive.”

But he’s determined that Topshop doesn’t lose its visibility in the U.S. as he waits to open in SoHo. The retailer is in talks with Opening Ceremony about continuing to carry some Topshop products, will show its spring collection to the fashion press in New York in the next few months, and may do a contest on its Web site that would give prizes to American consumers of shopping trips to its megastore on London’s Oxford Street.

The executive also was using his latest visit this week to eye other markets in North America. On Tuesday he flew to Montreal and Toronto and said those cities present interesting opportunities, although he gave no time frame for opening there.

Meanwhile, Topshop continues to expand outside the U.K., with a trial store in Japan, plans to open eight stores in Russia this year and a 20,000-square-foot unit in Edinburgh. Coming soon is a 50,000-square-foot store in Liverpool, England, following the opening of a second, 30,000-square-foot space in Manchester, England. “Then there’s China, Hong Kong, India….,” Green said, smiling.

“We’re not slowing down,” he added. “Look, the delay in the U.S. is disappointing, but nothing is a given. It just means we’re going to have to work that much harder.”