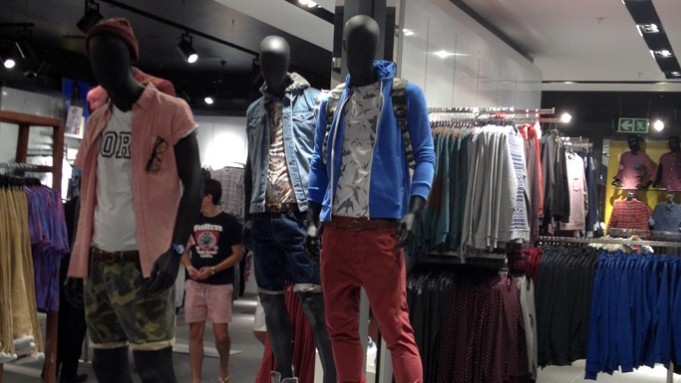 The store, a few doors away from competitor Zara, carries all of the Topshop and Topman collections, including beauty and accessories.

“To say that the arrival of Topshop and Topman in South Africa has created a huge amount of excitement is an understatement,” Veronique Shera, managing director for retail at House of Busby, said at the opening, which was also attended by Topman’s creative director, Gordon Richardson.

Shera said the South African store would receive weekly deliveries flown straight from the U.K. “All the inventory will be fresh and current and up-to-date,” she said.

As for price points — import duties for clothing have always been a challenge for international brands — Gina Digregorio, international senior marketing manager for Arcadia, said, “We’ve obviously come in very competitively. We do our market research like everyone else. We’re slightly more expensive than the U.K., taking into account import duties and operating costs. But everywhere that we go into the market internationally, we have to maintain our position as being that of affordable fashion.”

South Africa has become increasingly attractive to international fashion labels. The 2012 AT Kearney Global Retail Development Index classified the country as a developed, rather than emerging, retail market thanks to the proliferation of international players. Last year, South Africa was among the 30 top-developing countries for retail investment. Neighbor Botswana made the list this year.

In the past year alone, Zara has opened three boutiques in each of the key cities of Johannesburg, Durban and Cape Town. Gap, after years of having its own corner in selected Stuttafords department store locations, launched three freestanding stores in Johannesburg, Cape Town and the capital, Pretoria. Bensimon, often referred to as the French version of Gap, opened stores in Cape Town and Johannesburg. On the luxury end of the market, British men’s wear brands Thomas Pink and Hackett both opened in premium malls in Johannesburg. Thomas Pink is in the smaller, posher Hyde Park Corner, while Hackett is in Sandton City.

“In many ways, the entry of Zara into the market was the catalyst for retail,” said Marco Cicoria, the former Stuttafords merchandise director who left two years ago to start his own firm, Brand Capital. “All it takes is one major retailer, and everything changes. Zara made the biggest statement about the retail prospects in South Africa.”

Before Zara’s arrival, there was a slow stream of high-end brands opening flagships in Johannesburg and Cape Town. Louis Vuitton led the pack, opening in Sandton City in 2004, followed by Cartier in 2007. Paul Smith opened in both cities toward the end of 2007, while Gerard Darel, Jimmy Choo and Burberry chose Cape Town for their first South African outposts in 2008.

Until Zara burst upon the scene, however, international fast fashion wasn’t as easily available.

Mickey Walker, executive manager for Thomas Pink in South Africa, said that retail interest in the country has grown, particularly since South Africa successfully hosted the FIFA World Cup in 2010. “That was a turning point in terms of changing the perception of the country as being crime-ridden, which was part of the reason why many brands were hesitant to come into the country,” said Walker. “Also, South Africa is an entry point into the rest of the continent, and brands were looking for the right local franchise or wholesale distribution partners to help them grow their business in this new and relatively unknown, but potentially profitable, market.”

Hilton Mer, chief executive officer of Stuttafords, Gap’s local partner, pointed out that the economic strain many countries in the West are under has benefited retail growth in South Africa. “Until a few years ago, there was no compelling reason to look for new markets.  Europe, Asia and America were booming. However, with the impact of the global economic crisis on consumer retail spending in these markets, brands had to look elsewhere for growth; they had to look further afield,” he said.

South Africa remains an attractive prospect because “it is the largest economy in Africa and is a prospective launch base into the rest of Africa,” said Mer. He pointed to several built-in advantages, such as increased consumer spending, good infrastructure, a stable banking climate, and an understanding of the business culture on the continent.

Cicoria believed that for many brands “South Africa seems so far away. There are some that prefer to come in on their own, but most seek a local partner. There’s the benefit of the local knowledge a partner brings to the table.” He recently brought in the English label Ted Baker, which is available through Stuttafords, and is focusing on a stand-alone store in the near future.

Stefan Laban, managing director of strategic alliances for Gap Inc., echoed Mer when he said at the launch of Gap in Sandton City, “South Africa is the natural next step for expanding our presence on the continent. The country has a thriving economy and high Gap brand awareness, so we believe there is tremendous opportunity for us in the market.”

Price, Mer admitted, remains a challenge in South Africa. “It’s always under pressure. Remember that import duties for clothing are at 45 percent. None of the brands can avoid that. But we cannot afford to pass on that cost to the consumer. You do that and the market eventually finds you out,” he said.

Cicoria agreed: “The duties represent the biggest additional cost, and price points are the biggest hurdle. But brands that outprice themselves on launching don’t always keep loyal customers. The South African consumer is not unlike the rest of the world. They are looking for value in every segment of the market.”

Whether brands will continue offering value for money remains to be seen, as the South African rand continues to weaken against all major currencies. Digregorio insisted that Topshop’s prices would remain competitive, and that the retailer would continue with its retail expansion plans. “We’ve got Durban opening in three weeks, and we’ve signed Cape Town, in the Waterfront,” she said. “So those were our priorities, to get our flagships in the best malls in South Africa, which we’ve done and, after that, we’ll look into shops-in-shop.”

Edcon’s retail network, through its nationwide Edgars department store chain, would be the logical choice for shop-in-shop locations for Topshop and Topman. Digregorio pointed out that it wouldn’t be the first time the retailer adopted such a strategy. “In the States, we’ve just gone into Nordstrom, and that’s been so successful,” she said.