The new store, adjacent to Rockefeller Center, will be the retailer's second-largest unit after Oxford Circus in London. 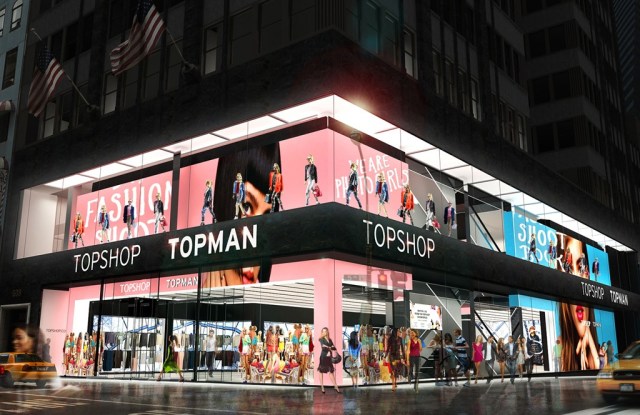 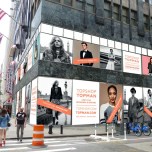 LONDON — Topshop is ready to dress New York’s uptown customers, with plans for a 40,000-square-foot flagship at the corner of Fifth Avenue and 49th Street.

The new store, currently occupied by Lacoste and adjacent to Rockefeller Center, will be the second-largest Topshop unit after Oxford Circus in London, which measures 90,000 square feet. Housed in a listed, landmark space built by Henry Goelet in 1931, the new store will also carry the Topman brand.

In addition to the uptown store, Topshop will open four new units across the U.S., in San Diego, Houston, Atlanta and Washington, over the next 12 months. All, with the exception of D.C., will also have Topman spaces. Topshop owner Sir Philip Green will be investing $40 million to $50 million in building and fitting out all the new stores.

In an interview here, Green said the long-awaited uptown opening in Manhattan is part of a continued push into the U.S. market, where he aims to generate $1 billion dollars in revenue from the Topshop and Topman brands.

“It’s taken a couple of years, we’ve negotiated a few times, gone right to the altar — and then been jilted,” said Green of his quest to find the appropriate space uptown. The first U.S. Topshop unit opened on Broadway near Broome Street in 2009, and there are stand-alone stores in cities including Chicago, Los Angeles and Las Vegas.

Green also said he plans to refurbish Topshop on Broadway, and take back some space from the store’s atrium area.

He said he knows the uptown Topshop, which is set to open on Halloween, will need to perform alongside its upscale neighbors such as Saks Fifth Avenue, so the focus is on a premium offer. Other nearby stores include Michael Kors, Ted Baker and Hennes & Mauritz.

The new Topshop won’t look anything like the Oxford Circus one, Green stressed, and will incorporate the building’s wraparound glass window feature. The building’s upper stories have Art Deco detailing, while the lower floors have a more contemporary feel.

The new store will carry full collections for Topshop and Topman, including collaborations, exclusives and trend-led mainline collections.

“We’ll be among the higher-end department stores, and serving the upper end of the market,” Green said. “We’ll be developing the personal shopping offer, and we’re discussing doing an ‘edited’ section of merchandise, showcasing things in a slightly different way, and doing Unique product for the American market,” he added, referring to Topshop’s runway collection that shows during London Fashion Week.

Topshop has also opened its first U.S. office in Manhattan’s SoHo neighborhood, and hired a small American buying team. He said “several hundred new jobs” will be created at the new uptown store and at head office.

Asked how close the brand is to achieving its $1 billion goal, Green said, “We’ve got to get to $500 million first.” He said he’s pleased so far with the progress Topshop has been making in the U.S., despite some admitted bumps along the way. “We want to be careful not to plant our flag and leave it there. And, hopefully, there won’t be any accidents,” he said.

In 2012, Green sold a 25 percent stake in Topshop and Topman to Leonard Green & Partners with the aim of accelerating the brands’ expansion into the U.S. market. He said the relationship with his partner remains sound.

Regarding the brand’s latest collaboration with Kate Moss, the first collection is due to drop on May 1 online and in Topshop stores. The line will also be carried at Topshop’s Nordstrom units. The retailer currently has 42 shops-in-shop at Nordstrom and is discussing bumping that number up to 52 stores by the spring. There are 49 Topman units, and that number is set to climb to 55 over the same period.

Worldwide, over the next six months, 15 freestanding Topshop stores are set to open in eight countries, including Russia, Turkey and Vietnam.