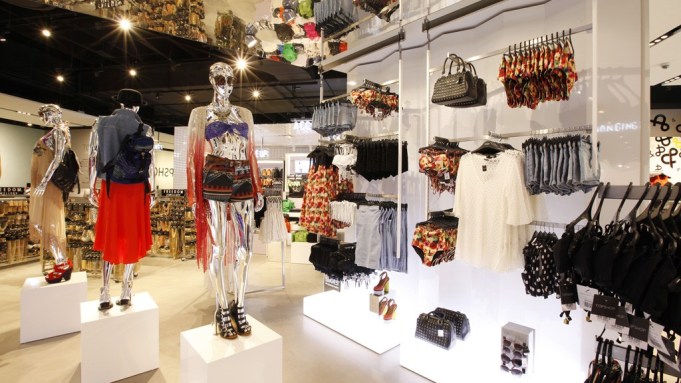 LOS ANGELES — On the heels of its deal with Los Angeles-based Leonard Green & Partners, Topshop has planted its first location here as it revs up expansion in the U.S. and abroad.

Opening Thursday, the 30,000-square-foot store at Caruso Affiliated’s The Grove is Topshop’s second on the West Coast and fourth in the U.S. A highly visible store at a corner in one of the country’s most highly trafficked shopping centers, it will be a crucial test on the West Coast for Topshop, which is strategizing to become a serious retail contender nationwide.

Before visiting the Los Angeles store Wednesday morning, Topshop owner Sir Philip Green called it a “landmark.” “It certainly looks very, very strong. The object is opening flagship stores, but you want something individual for each market. [Caruso Affiliated president and chief executive officer] Rick Caruso has given us a lot of help. Having the whole end of the street, we really created something special,” he said.

Green’s schedule during his trip to Los Angeles reflects Topshop’s expansion mind-set. On top of checking in on the Los Angeles store and attending its opening festivities, Green worked in meetings with LGP and Nordstrom, where Topshop now has 14 in-store shops. It was revealed in December that LGP purchased a 25 percent stake in Topshop and Topman with the aim of increasing the retailer’s U.S. sales to $1 billion and doubling global sales over the next three to four years.

In his talks with LGP about Topshop locations in the U.S., Green said, “They felt the potential was we could open 50 stores. I had always been thinking slightly less. We are open-minded about what the opportunities are, but we still want to be picky. We are not going to go and do crazy things. We are going to go carefully and cherry-pick locations. We will take our time.”

Topshop is eyeing major cities in the U.S. for future locations. Green mentioned San Francisco, Miami, Boston and Washington, D.C., as possibilities, but said leases had not been signed in those cities. Topshop is also looking for a second location in New York. Asked about Topshop’s spread in malls, Green said, “If you go across America, there will be 15, 20, 25 malls you want to be in, the key ones, and the others you have to be choosy about.”

The smallest Topshop unit in the U.S. is Las Vegas at 22,000 square feet, and Green emphasized he is committed to keeping Topshop’s footprints in the U.S. relatively large. “If we are going to build something special, and we are going to show both brands, Topshop and Topman, in the way we want in big markets, then we want to do it properly,” he said. “There is no point in coming in and doing 5,000 square feet.”

Before the next Topshop stand-alone unit opens in the U.S., it is likely that there will be more in-store Nordstrom locations. Nordstrom has brought in the Topshop merchandise to attract younger customers to its stores. Green said, “That business will significantly grow in terms of outlets over the next three to six months. I’ll be surprised if it doesn’t at least double.”

Outside of the U.S., Topshop has been pushing its units around the world. Currently, it has 324 stores in the U.K., with another 145 international stores in 38 countries. In partnership with Lane Crawford’s retail subsidiary Lab Concept, Topshop will enter Hong Kong with a store opening in May. China is definitely on Green’s radar. “We are still engaged in a lot of conversations about China. We haven’t made up our minds, but this is an ongoing dialogue,” said Green. “A lot of our international markets have new stores coming on. Hong Kong will be our 39th market. We have stores under development in Canada, Australia, Brazil and places like Kazakhstan and Azerbaijan.”

As for Los Angeles, the two-level store housed in a former Banana Republic space has an enormous gleaming white storefront broken up by glass doors that span both floors. Topshop occupies two-thirds of the store. Topman, accounting for the remainder, is housed on the second floor. Unique to the store are the largest personal shopping suite in the U.S. and a shoe section constructed of glass display cases illuminated by a big skylight overhead.

Although he described business at Topshop’s Las Vegas location as merely “OK,” Green expressed confidence that the Los Angeles unit would become a robust performer. Judging by The Grove’s roughly $1,400 in annual sales per square foot, it is estimated Topshop could generate as much as $42 million yearly at the shopping center.

“The feeling generally seems to be very strong,” said Green. “A good percentage of our Internet business that we have been shipping from the U.K. has been California-based shipments. I think people are starting to know us here. You have a lot of people who travel internationally, so they know the brands. Obviously, there is a big university student population here, and we have been working on the campuses of the different universities.”

Additionally, he noted that sales in Topshop’s in-store shop at Nordstrom in Orange County’s South Coast Plaza “have been excellent. It is one of our best-performing stores.”

Topman has been a sales growth vehicle at Topshop-Topman stores, and Topman design director Gordon Richardson didn’t expect Los Angeles to be an exception. In fact, he anticipated Topman to do better from the start in Los Angeles because it has become more well known. “Across the States, the most successful [Topman] is in New York. The hardest of our four stores is Chicago. Very often, it has the slower build,” said Richardson.

Suiting has been a standout category for Topman in the U.S., where Richardson acknowledged denim is extremely competitive. He said Topman is filling a gap in the market for “affordable, young, fashionable, edgy suiting” for men who can’t afford or don’t want to pay two to three times more for suits from designer labels. To build on its success in suiting, Topman has introduced a Lux collection of elevated suiting in the Los Angeles store. Lux suits are priced at about $600, as compared to about $400 for most of Topman’s suits.

Supporting Richardson’s take on Topman, Green said, “Our men’s formalwear business is still very strong.” Speaking about Topshop, which changes up its merchandise with 300 new pieces weekly, Green went on, “Our business is pretty stable. I’ve got a very good team that is close to the market. I’ve got 50 designers and, therefore, hopefully, they get the trends right. Touch wood, so far it is working. Each market is slightly different, and we are learning. The weather here is obviously kinder, so it has got to be a slightly different mix.”

In the year ended Aug. 25, the latest period for which Topshop parent Arcadia Group released financial results, the company swung to profit, but sales edged down 0.1 percent. At the moment, Green said, “Business is OK. I don’t want to make excuses, but we have some pretty bizarre U.K. weather like you have had in America. [It’s] not helpful.” Turning his attention back to the Los Angeles store, he continued, “I prefer looking at the sky here.”