Tory Sport Sets Up Shop in the Flatiron District

Tory Burch will open her new 5,000-square-foot boutique today in the Flatiron District. 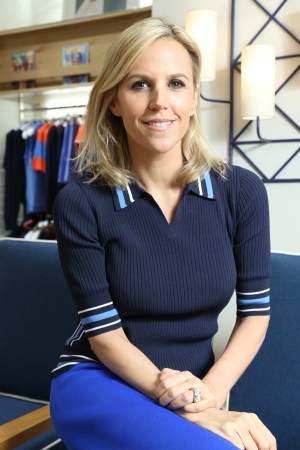 NEW YORK — Tory Burch is developing a serious athletic side.

Tory Sport, her activewear brand, will open its first permanent home today at 129 Fifth Avenue in the Flatiron District here. Joining activewear neighbors such as Bandier, Nike, Athleta, Lululemon and New Balance, Tory Sport has moved into a 5,000-square-foot space that features the full activewear collection, including high-performance clothing, bags, shoes and accessories for running, studio, tennis, swim, golf and “Coming & Going.” The collection, which will also begin wholesaling next month at Barneys New York, is geared to a woman who actively participates in sports (or wants to look that way), but wants a strong fashion edge.

Giving a tour of the new store on Thursday, Tory Burch, chairman, co-chief executive officer and designer, cited Tory Sport’s potential. “For me, I feel it’s not a trend, but a shift in the way women are dressing.” An avid tennis player, runner and exerciser, Burch was dressed in Tory Sport’s blue Neoprene skirt and tech knit ribbed polo from the “Coming & Going” category.

Roger Farah, co-ceo, believes Burch brings a feminine side to her active line, which is different from what’s already out there.

“Many of the major athletic brands have origins in men’s performance wear and later did women’s. They don’t start out with a women’s point of view, a feminine point of view, a fashion and design point of view, and I think Tory does,” Farah said. He said the brand has always been colorful, which lends itself to activewear. “It’s a natural extension. She’s also personally active. She’s living the lifestyle and she speaks to that woman,” Farah said.

He sees enormous potential in Tory Sport, which was launched last September. “We think it could be huge. We think it can be a billion dollar business. I think it can go in more places than Tory Burch can go. There are communities, there are neighborhoods and markets with the way this lifestyle is expanding. I was in Asia recently and so many of the big department stores there are incredibly productive and are staples of the community, but have no active or sports base, and they’re all scrambling to figure out how to create whole floors of it and dedicated space.”

He said over the long term, they will have freestanding Tory Sport stores and shops-in-shop in Asia.

New York is just the starting point in the U.S. “We are aggressively looking and talking to real estate developers right now. We’re not dabbling,” Farah said. “It’s interesting, on the Web site, 60 percent of the customers that we’re getting are new, 40 percent are crossing over from the Tory Burch Web site. For us, that’s all additive. We can say that this is another part of the Tory Burch lifestyle and her wardrobe, but to be getting 60 percent new customers is great.”

In addition to the new Flatiron shop, Tory Sport is available online at torysport.com and in a pop-up shop at 257 Elizabeth Street that will continue for the time being. The Tory Burch store in East Hampton will convert to a permanent Tory Sport store in May. In addition, Barneys New York will become the exclusive retailer of Tory Sport beginning next month, carrying the collection online and in its Beverly Hills, Seattle, San Francisco, Chicago,  Las Vegas and two New York — Madison Avenue and Chelsea — locations. Burch said they’re contemplating what future distribution will look like but want to keep it “tight and lean.” Expanded wholesale distribution will likely begin in 2017, Farah said.

The Fifth Avenue boutique, with 3,900 square feet of selling space, gives a nod to sports throughout the decor, such as striped floors that resemble pool lap lines; a diamond pattern etched into nickel wall panels referencing a net; blue awnings and large screens with videos and images that highlight athletes, and leather handrails that evoke the grips of old-school tennis rackets. Vintage Sports Illustrated magazines and paintings of women wearing the collection, commissioned from artist Kelly Beeman, adorn the walls.

The store features white-washed oak pegboards on modular walls and adjustable display units to maximize flexibility. Right now, the store’s entrance features “Coming & Going,” clothing that can be worn to and from workouts and then to lunch or errands, and swimwear. At the center of the store is tennis apparel and at the rear is golf and studio (yoga apparel and exercise wear). “It’s Seventies surf lodge meets Scandinavia and a ski lodge,” Burch said. The store was designed by the company’s in-house store design team led by Renée Viola, vice president, global store design, planning and construction, with O’Neil Langan Architects, led by Steve O’Neil.

In the rear of the store is a seating area anchored by a minimalist fireplace, four Jean Royère chairs with indigo linen cushions and a concrete and nickel table, that is flanked by two Royère sconces. An interactive tennis game with a light-up scoreboard that once the game is done becomes a look book is featured in the middle of the tennis area. While there is no apparel geared to children, Burch predicts this will be a popular amusement for the younger set.

“The challenge is to have natural fibers and mix them with performance features,” said Kerstin Dorst, senior director of design development, who was previously at Adidas. “We had to do a lot of testing,” she said. Among the fabric’s features are quick dry, wicking, waterproof and SPF. In many of the items, high performance yarns are blended with CoolMax. The collection is manufactured in Asia.

Asked whether she would sign an athlete to wear Tory Sport, Burch replied, “We would, but it’s more complex than it used to be. We have brand ambassadors who are young girls who wear it and give us feedback.”

The store will have fresh deliveries every six weeks, and about 30 percent of the merchandise will be bestsellers that carry over season to season. All of the salespeople will have iPads and mobile point-of-sale.

Burch said she hopes that the space can be used for yoga classes, lectures, Tory Burch Foundation activities and other events. Tory Sport trunk shows are planned at Southern Methodist University’s Theta House in Dallas — Burch was a Theta at the University of Pennsylvania — on April 11, and Burch will make an appearance at a store called Market at Highland Park Village in Dallas on April 13. A trunk show is also planned at the Greenwich Country Club on May 12.

Brigitte Kleine, president of Tory Burch, said the next step will be working on international distribution plans. Burch said she would eventually like to open Tory Sport stores in Dallas and Los Angeles and would consider Japan. Other categories they’re looking at adding would be outerwear, and possibly ski. “That would be fun,” the designer said.