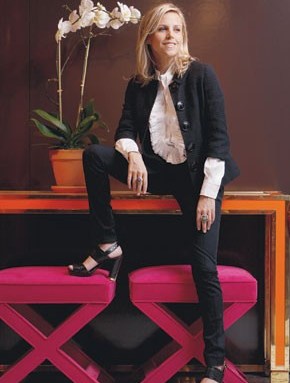 Tory Burch is stepping on the accelerator.

With handbag sales surging 50 percent and accessories revenues overall increasing by 200 percent last year, the designer is out to drive her business to the next level via overseas expansion, rolling out more sportswear/accessories stores in the U.S., a brand new image campaign and adding more product categories.

The four-year-old company — which sources say already has sales of $200 million annually — is now housed in a newly designed 25,000-square-foot space in New York on the seventh floor of 11 West 19th Street. The place is decorated with Burch’s signature orange walls, rich wood floors, bright pink and orange chairs and tastefully lit mirrors, and is three times larger than the former office at 99 Madison Avenue.

The space allows the entire Tory Burch team to work on one floor — there’s design, production, merchandising, retail, marketing and, of course, an extra-large showroom that houses the apparel and accessories.

As it turns out, the new space opened just in time, since Burch plans a major expansion beginning in the fall.

“We looked for a space for quite some time, and couldn’t find anything like this,” said Burch from her bright orange, green carpeted and mirror-filled showroom. “It was really important for us to all be on one floor.”

Burch made clear the expansion plans she has for the brand don’t include a sale of her company — an idea, she said, that she will never be closed to, but just isn’t thinking about right now.

“I’ve taken a lot of meetings, and met with many people about this,” the designer said. “I never turn down a meeting, but I just don’t feel that it’s the right thing to do right now.”

Also, after a much-publicized separation two years ago from venture capitalist Christopher Burch, the designer said she and her soon-to-be ex-husband remain friends and co-owners in the business.

“We have a really good relationship,” Burch said. “It wasn’t always like this, but we do now. We’ve overcome our issues and I’m honestly proud of that. He is a decision-maker in the company, we have six kids — three together and he came with my three stepdaughters, whom I remain really close with.”

Meanwhile, the Tory Burch team (or “family” as Burch calls them) is preparing for a big fall season. The company is beginning a rollout of store openings — San Diego is opening now, Houston will open next month, San Francisco is planned for August, Palm Beach, Fla., in October, Malibu, Calif., will open in January and a new East Hampton, N.Y., store will be unveiled at the end of May. That store, which was 500 square feet, will expand to 1,700 square feet, complete with a newly designed beach store concept. The design highlights the colors of the ocean, in the blue printed wallpaper, white-washed wood floors and white furnishings. These stores will add to the brand’s current roster of 13.

Originally launched as a retailer, Tory Burch plans to open five stores a year over the next few years, as well as build on the wholesale portion of the business, according to Brigitte Kleine, president. Currently, Tory Burch sells in major department and specialty stores worldwide including Bloomingdale’s, Saks Fifth Avenue, Bergdorf Goodman, Selfridges and Harvey Nichols. Products wholesale from $119 to $166 for clothing and from $95 to $272 for accessories.

“Tory’s concept of going from retail first and then into wholesale was just the greatest idea,” said Ron Frasch, president and chief merchandising officer at Saks Fifth Avenue. “It gave a true vision for the brand even before the wholesale began. Her stores gave us a strong point of view about how she wanted things done.”

Frasch said that for Saks, the Tory Burch business has been extraordinary. He said when he was looking to recreate the bridge floor at Saks, he turned to Burch hoping she would be on board to move from the contemporary floor over to bridge. That move, he said, was the best move they could have taken, since her floor space increased with her own shop on the floor, and sales have risen dramatically.

“I’m a huge fan of Tory’s because she’s so smart and realistic about how she approaches her business,” he said. “She was smart enough to see a void for people who wanted fashion at a more reasonable price without sacrificing the quality. We’ve had crazy success with the brand.”

In addition to retail, the company is expanding its accessories division, adding a larger array of handbags, shoes and jewelry. Sources have said that half of Burch’s sales is currently derived from the footwear, with the rest of the products making up the remainder of the volume. However, executives at the company said that is not true, but declined to break out their sales.

This expansion in accessories, said Kleine, comes on the heels of the strong accessories year overall for the brand. The spike in sales also caught the attention of the Council of Fashion Designers of America, as Burch has been nominated for this year’s Accessory Designer of the Year award, competing against Marc Jacobs and Michael Kors.

“Accessories have always been really important to the brand, and we do them all in-house, which I think is unique,” said Burch, noting her production partner in shoes, Vince Camuto, has worked with her to dramatically grow the shoe segment of her business. “Since we opened the first store downtown, we have been selling 15 product categories, we are just working on keeping that lifestyle going and expanding on it.”

Fall will also introduce a new “BR” logo, which pays tribute to Burch’s father, Buddy Robinson, who died last year. That logo can be seen on select accessories. Burch said the new logo will be an addition to the company, and will not replace the brand’s popular double “T” logo. However, the original logo will be seen less on the clothing and accessories — which is part of the brand’s effort to become known for the design, not necessarily the brand name.

Also to pay tribute to her father, Burch and Kleine have created a “Buddy Program” training operation, which will help bring consistency to the brand across the board in all of the company’s freestanding retail locations. The program gives sales associates an in-depth look at what the brand stands for and explains Burch’s design inspirations behind each product.

“A program like this is critical for the brand,” Kleine explained. “It will get the feeling we have here in our offices into the stores. It will also give our sales associates a feeling of ownership in the brand.”

In addition, Burch has just signed on with image maker Trey Laird, who has worked with brands ranging from Donna Karan to Gap. He’s in charge of the overall branding of the Tory Burch label, and as Burch said, will “take the brand to the next level.”

“Trey will take care of making everything consistent, from the look book shoots to the labels we have on our clothing,” Kleine said, also noting that there will be a Web site redesign in the near future. “The Web site will reflect our brand in a much better way than it does right now.”

To help boost the brand’s presence overseas, Kleine has just hired Elisa Dal Pos as vice president of sales, general manager, Europe. She will join the company in May from her post as vice president of international sales for Donna Karan Collection. Based in Milan, Dal Pos will be responsible for setting up Tory Burch’s international operations, first opening a showroom in Milan in September.

Burch said she is in the early stages of looking into opening stores overseas, hoping to first land in London, followed by Moscow and Hong Kong. Also in the plans, Burch said she is seeking a partner to launch sunglasses and is working on expanding her activewear — especially for swim, tennis and golf.

“Tory could have had the success she’s having today two years ago,” Frasch said. “But she’s smart to keep it under control. She has the best team I have ever seen working together and I really think she will only get bigger and better with time.”