Tracy Reese is finally showing her stuff with her first store opening today in lower Manhattan. 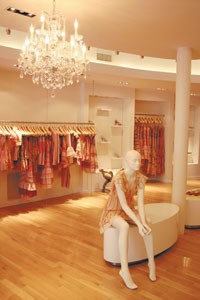 “We’ve been in business for almost nine years now, and we have been waiting for this day for a long time,” Reese said during an interview in the store at 641 Hudson Street, where contractors were still working. “Here, we can showcase all of our product — Tracy Reese, Plenty, the accessories and the home collections — exactly the way we envision them.”

Reese said she had hoped to open her first store on Bleecker Street here, and wasn’t keen on the Meatpacking District, until she realized her neighbors would include brands Calypso and Catherine Malandrino, to name just two of the contemporary retailers entering the area.

“I just thought the Meatpacking District wasn’t really me,” Reese said. “I knew I wanted to be downtown so I wouldn’t conflict with the stores we sell uptown, but I really didn’t think this was the area for me. Now I know I was wrong.”

“We had the same vision of what we wanted the store to be,” Reese said. “That was a warm environment where women just want to be. It’s pretty and cheery, and you will be waited on hand and foot.”

The front of the store houses the Tracy Reese collection against minimalist white walls and simple wood floors. The rear houses the Plenty collection, which highlights Reese’s own prints as showcased on the walls. Also in the back of the store is the Plenty Home line, offering sheets, blankets and tabletop items as well as a select group of accessories designed for the store. Reese’s signature chandeliers light the store and there is a bright pink seating area near the dressing rooms.

“The rest of the stores will be able to buy the accessories with the spring line, but we have them in the store now,” Reese said. “And we are also selling the runway jewelry designed by Gerard Yosca especially for us.”

Tara Mulhare, director of retail at Tracy Reese, said she expects about $2.5 million in first-year sales at the store. She said the company plans more stores in major markets. Reese said she expects Los Angeles to be next, but is still scouting locations.