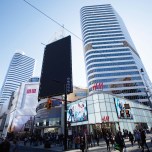 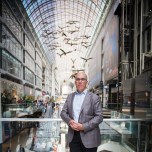 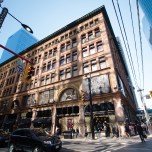 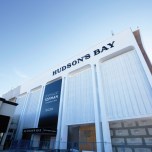 It’s hard to imagine now, but there was a time when John Sullivan, president and chief executive officer of Cadillac Fairview, would get a sinking feeling when he looked out his office window.

Yet Sullivan’s gaze would be fixed on the darkened Sears store at the north end of the mall, the kind of black hole in the retail mix that would bring angst to any shopping-center operator.

From 2012 to 2013, Cadillac Fairview bought back eight Sears leases at its malls around the country, including four to accommodate Nordstrom stores. “It was a bit of a gamble then, but we felt it was the right time to take the malls to a new level,” said Sullivan, who acknowledged he didn’t know for sure if in all cases, there would be anchors for the spaces, or if they would have to be subdivided for smaller tenants.

Ultimately, the bet paid off.

Fast-forward to Sept. 16, 2016. Opening day for Nordstrom in Eaton Centre, on the site of that former Sears. It’s Nordstrom’s first location in Toronto and fourth in Canada, following openings in Cadillac Fairview-owned Pacific Centre in Vancouver, Chinook Centre in Calgary and Rideau Centre in Ottawa.

Toronto’s Nordstrom is among the Seattle-based department store’s most modern, spacious and brightest formats to date, with new shop and service concepts and a significant penetration of designer goods and exclusives, from Loewe to Gucci to Madewell, a “pop-in” shop featuring a different designer or fashion trend every six weeks, and a “men’s club” for personal shopping, beer and hanging out with the guys.

And there’s no more angst. As Sullivan stood alongside the Nordstrom brothers — Pete, Blake and Erik — and their cousin Jamie, hundreds of shoppers streamed into the store greeted by a lineup of cheering, clapping Nordstrom workers. It’s a well-orchestrated show that occurs at every Nordstorm opening.

“Check out the traffic,” Sullivan said assuredly. “Things are the way they should be. Traffic did flatline when we shut the Sears box, but I guarantee you traffic will be higher once we’ve had Nordstrom open for six months.” Likely 10 percent higher, he added.

In Canada, with Sears whittling down its fleet, Target and Sam’s Club closing all their doors, and the arrival of Nordstrom, Saks Fifth Avenue, Lowe’s, Uniqlo, Apple, Microsoft, H&M, Marshalls and other retailers, there’s been tremendous transformation in the retail landscape in the last few years — even unprecedented, according to some real estate executives. The influx has induced landlords to reinvest and strengthen their properties through renovations, expansions and remerchandisings, particularly at high-end malls where productivity — and consequently rents — have gone up, and has made shopping more comprehensive in a country where residents chronically complained about inadequate offerings.

Mall operators have also benefited from the strength of the U.S. dollar, encouraging Canadians to shop at home rather than south of the border, and likewise encouraging U.S. citizens to shop when in Canada. Despite its rush of retail from all over the world, Canada remains far less dense with stores than the U.S. and a long way from being over-stored. There’s 16 square feet of retail space per capita, versus about 24 in the U.S.

Still, many Canadian shopping centers continue to struggle to fill vacancies created by the big-box departures. They’re also feeling the impact of the Internet, and finding retailers as demanding as ever during lease talks and tamping down store expansion programs as Internet sales grow.

“I will tell you that Target rippled through the marketplace, particularly the lower end,” Sullivan observed. “We only had five Targets and we have uses for every single one. But I don’t know what these power centers are going to do. You may have to tear some of them down. I think there is not enough demand for them.”

According to Heather Kirk, managing director, BMO Bank of Montreal, “About half of the Target space has been re-leased and half is still vacant. It’s been slow. The market was hoping it would be faster. It’s been terrible for Canadian retail landlords exposed to that. RioCan [a real estate investment trust] had the most significant exposure.” At the time of Target Canada’s announcement in January 2015 that it would close all of its 133 Canadian stores, RioCan had 26 locations and has since re-leased several to Lowe’s and Canadian Tire. Target had primarily occupied power centers and suburban locations.

“The big issue is not all of these locations are conducive to being carved up and there are fewer big-box players currently looking for space. People are making progress, but it takes time,” Kirk said.

Most of the country’s malls, particularly upscale centers, are in the “very strong hands” of private pension funds who have made “significant investment in malls making them more competitive,” Kirk said. Generally, “Canadian malls have a much higher sales per square foot than U.S.,” she added. Oxford Property Group, Cadillac Fairview and Ivanhoé Cambridge, among the three largest real estate firms based in Canada, are privately owned by funds. “They are putting the capital into their high-end properties to remain competitive,” Kirk said. “Midmarket malls are struggling while the higher-end malls are doing relatively well.”

“The massive influx of U.S. and international retailers has been a unique opportunity for malls to increase their productivities which increases their rents,” said Antony Karabas, ceo of HRC Advisory and a native of Canada. “The amount of money that has been spent in enclosed shopping malls has been really significant, probably relatively more than what is being spent in the U.S., the reason being that Canada had a unique opportunity because of the departure of Sears from the better malls, Nordstrom taking some of those stores, and the significant upgrading of Hudson’s Bay in their downtown stores. Holt Renfrew and Harry Rosen are also remodeling,” while Holt recently closed some units to focus on its best locations. The level of significant investment by real estate firms “could last another two or three years at most.”

“The market is definitely going through a major, major transformation,” observed Michael Turner, executive vice president of Oxford Property Group, based in Toronto and New York. “I don’t know how long it all lasts. In the current environment, the best assets are stealing market share and those not in a good position are feeling a lot of pain.

“Overall, it would be a challenging environment,” Turner added. Target and Sears operated many traditional retail boxes, making it “very competitive to backfill” the space they vacated. “Transactions are taking longer to get done with retailers. It’s more competitive. They [retailers] have become a little more choosy.”

Under margin pressures, retailers are working harder to get the best real estate deals possible, prolonging the leasing process. “It’s just a lot more work,” Turner said. “Retailers are more conservative, and their capex for new stores competes internally with their capex dollars for online strategy and technology projects. We had four Target boxes and they are all in the advanced stages of leasing and redevelopment. They will all be backfilled in late 2017, early 2018,” to a large extent with food offerings and culinary experiences, as well as ath-leisure, women’s fashion, and sports stores.

He said Oxford’s Canada portfolio has a 3 to 4 percent vacancy rate. Not long ago, it was 2 to 3 percent. In Oxford’s best centers, higher rents are being charged, while in less robust locations, rather than lowering rents, Oxford gives greater concessions, such as buildout support or flexibility on the duration of leases.

“The arrival of Saks and Nordstrom, and Holt Renfrew [expanding], has created a whole new dynamic. Wherever these guys opened up, you see investments being made in the malls at the same time,” said Claude Sirois, president of retail at Ivanhoé Cambridge, based in Montreal. “This has been somewhat expedited with the departure of Target — 13 million square feet of leasable space came back to the market at once, and that’s an invitation for all retail developers to look at their properties, think about new experiences, subdivide space and add entertainment.”

Ivanhoé Cambridge had seven Target stores and all of those boxes will be converted and redeveloped to either Wal-Marts, or subdivided with tenants such as Sportcheck, H&M, Marshalls and supermarkets, among other possibilities.

“When I look back at the last two, three years, at one point we had pipeline of three billion Canadian dollars, or $2.28 billion, in capital for expansions and developments. We have been reinvesting into our portfolio,” Sirois said. “We have a strategy as it relates to mills and outlets and we also have a strategy that relates to our existing portfolio.”

While other Canadian real estate firms have taken a pass on outlets, Ivanhoé Cambridge on Oct. 5 will open the 1.2 million-square-foot Tsawwassen Mills, a hybrid concept south of Vancouver, with fashion brands, outlets, dining, entertainment, and some first-to-market stores including Designer Shoe Warehouse, Saks Off 5th and Lululemon. “It’s bringing a whole new shopping experience” to a country where outlets are far and few between.

Though Ivanhoé Cambridge is at “the tail end” of its three billion Canadian dollar, or $2.28 billion, pipeline for expansion, “we will be coming out with more projects over time. Like our peers in the U.S., we are not standing still,” Siriois said. “Status quo is not an option. It’s no different here in Canada. The ‘A’ malls are clearly getting stronger,” while lower-grade properties weaken. “We have more than 280 million people [annually] that navigate through our properties. The traffic is flat, but we have more than 10 assets going through renovations. Each and every time we have reinvested in assets, we have seen an increase in footfall.”

At Cadillac Fairview’s retail properties, “Traffic had been flat for a while but that was because we had so much under development that people stayed away. It was just to tough to navigate,” Sullivan said. “In the last six to eight months, it started to go back up again, as some of our projects are starting to get finished.”

At Chinook Center in Calgary, “We have big expansion plans over time. We have a lot of density and opportunity there, but right now we are focused on getting a Saks Fifth Avenue up.” It’s expected to open in January 2018.

Redevelopments have also impacted the vacancy rate. A “stabilized” rate is when CF’s properties are 95 to 97 percent occupied, Sullivan said. “Within a year, we are going to be back to that, we are probably 92 or 93 percent right now. We may empty out a wing of a mall, renovate, redo it, remerchandise it and fill it back up, so it inflates the vacancy rate for a short period.”

The 2 million-square-foot Eaton Centre would be a perfect example, he said. Annually, it generates 1.5 billion Canadian dollars, or $1.14 billion, in sales, or more than 1,500 Canadian dollars, or $1,139, a square foot, and draws approximately 50 million visitors. And with the opening of Nordstrom, Uniqlo opening soon and another major tenant to be announced, a 10 percent lift in traffic is expected. There has also been extensive common area improvements and food court upgrades.

“You know we are the number-one tourist destination in Canada,” Sullivan boasted — even drawing more tourists than Niagara Falls, he contended.