Beauty executives at the recent Tax Free World Association annual meeting in Cannes, France, said they were battling a “perfect storm” of economic and geopolitical setbacks.

By Jennifer Weil and Pete Born on November 9, 2015
View Slideshow 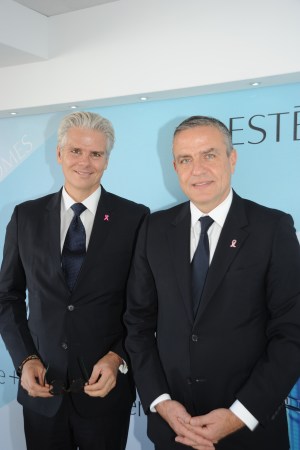 The $63.48 billion global travel-retail market has shown resilience in the past, but this year a host of economic and geopolitical setbacks have revealed a vulnerability not seen in decades.

That was the overriding message at the Tax Free World Association (TFWA) annual meeting, which ran at the Palais des Festivals here from Oct. 18 to 23, mere days after deadly floods swept the Riviera.

Three of the four main emerging markets — Brazil, Russia and China — are in the grip of economic difficulties, causing ripple effects across the globe. Their denizens are traveling and buying less, whereas once they were the hope of the developed world’s travel-retail business.

“It is kind of a perfect storm of currency devaluations,” said Cedric Prouvé, group president of international at Estée Lauder Cos. Inc., at the event. “All of the key travel corridors are hurt.”

Philippe Benacin, chairman and chief executive officer of Interparfums SA, noted that 2015 is the first year most everywhere in the world has been negatively impacted, for a variety of reasons. There was, for instance, unrest in Syria and Iraq, the MERS health crisis in Korea and the June bombing in Bangkok.

“If you look at the whole business, it’s not good at all,” he said. “Visibility is super short — one month.”

The channel is in the red overall, but rebounding, in part due to the ongoing swell in passenger footfall. (In 2014, international tourist arrivals increased 4.4 percent to reach 1.14 billion, according to statistics by market research firm Generation.)

In the first quarter of this year, travel-retail sales were down 3.3 percent, whereas by the end of the first half, they had dipped just 0.2 percent versus the same period in 2014. Meanwhile, in the six months ended June 30, the beauty business — the largest merchandise category — had a 0.8 percent rise to $9.88 billion, the third-best revenue increase of any product segment, following fashion and accessories, and watches, jewelry and fine-writing instruments.

Javier Bach, chief operating officer of Puig, emphasized the growing importance of marketing and merchandising in airport shops, that the havoc triggered by currency fluctuations “shows again that pricing is always an issue, but it cannot be the main focus. You have travelers there. You have make sure you convert them into sales with other means [than discounts].”

For beauty, some of the strategies that brands and airport operators are implementing to help combat the malaise are to go more heavily into in-store services, on par with and sometimes surpassing department and specialty stores; an increased focus on makeup and newer categories to the channel, such as dermo cosmetics, niche fragrances and hair care; supersized products, like 200-ml. scents, and, on the opposite end of the spectrum, more moderate-priced brands.

Erik Juul-Mortensen, TFWA president, said in the opening conference that a watershed point has been reached.

“Events this year within and beyond our industry have confirmed that we are indeed experiencing a period of intense and lasting change,” he explained. “If the tectonic plates of the global economy have shifted, then so, too, have those of the global duty-free and travel-retail industries.”

To reaccelerate growth, Juul-Mortensen stressed it’s key to focus on productivity — converting passengers into consumers — and mobile technology, and to reassess many of the assumptions on which the industry was built.

“Otherwise, we might find ourselves going from the ‘sixth continent’ [in size of business] to the ‘lost continent,’” he said.

Complicating matters further these days has been the wave of consolidations on an unprecedented scale. Asked what the immediate fallout is from the upcoming takeover of 43 Procter & Gamble beauty brands by Coty Inc., executives at the show from both companies said it’s currently “business as usual.”

It was also recently announced that Dufry has agreed to buy a majority stake in World Duty Free, news coming a year after its acquisition of Nuance, giving it a leading 25 percent share of the travel channel worldwide. The Dufry-Nuance merger is going through a consolidation process, involving store concepts and brands.

That’s what’s helping drive La Prairie’s gains in travel retail, for example. The label is rolling out its Art of Perfection service, which includes facials and hand massages.

“Everywhere we are doing it, it is paying off,” said Laurent Marteau, head of travel retail worldwide at La Prairie Group, who explained a focus has been on training staff on treatment methods. “We also reinforced our training structure and coaching structure. The customer can buy everywhere; this is how we try to make a difference.”

Increasingly, La Prairie is also implementing a consultation area at the back of stores to facilitate link selling.

L’Oréal, meanwhile, keeps increasing market share, in part due to its recently minted Dermacenters, selling Vichy and La Roche-Posay products. There are now about a dozen worldwide, mostly in Asia, and by yearend, that number should reach 20.

Newly implemented alongside the Dermacenters’ existing services, which include three-minute skin consultations and expert advice, is an interactive program allowing full treatment routine recommendations to be made based on a person’s travel destination. This takes into account information such as temperature, UV and pollution levels, and wind-chill factors.

The brand offers, for instance, “flash makeup,” which can take from 10 minutes to a half-hour, and in a few airports, Chanel is creating treatment rooms. It recently introduced “The Art of Wrapping,” allowing clients to have their purchased products packaged specially.

At the end of last month, the company began testing a new retail concept in Dublin T1, which involves travelers’ introduction to various beauty routines based on the type of trip they’re taking. This could be for business or vacation, for example.

When it came to product segments, executives were emphasizing color cosmetics, the fastest-growing beauty category.

Shiseido, for instance, is selectively expanding Nars. Last year, it opened in Heathrow, plus Madrid and Manchester airports, while the Middle East is planned, according to Elisabeth Jouguelet, marketing director for travel retail at the Japanese beauty giant.

Another slant on makeup is hailing from Korea. At DFS, hot brands include Hera and Iope from AmorePacific and LG’s History of Whoo, according to Ariel Gentzbourger, senior vice president, general merchandise manager of beauty at the operator.

Among the notable shifts in buying habits at airports is that people — especially Asians — are increasingly price-conscious, according to Markus Stauss, marketing director of travel retail and export worldwide for Coty. “They’re checking the prices more and more.”

It is a reason travel-retail exclusives play an ever-increasingly important role.

“That’s where you can excite the customer,” he said.

Coty will also on Dec. 1 launch first in travel retail CK2 from Calvin Klein, two months before it rolls out in domestic markets.

Procter & Gamble has premiered scents such as Gucci Bamboo and Hugo Boss The Scent in the travel channel to strong results, according to Jose Maria Marquiegui, P&G Prestige, vice president, global selling organization.

The executive explained the company is also working with retailers and their data to target product assortments better, to help turn passengers into consumers. Gucci, for instance, is an especially strong seller for Chinese travelers, so it’s important to know where they are going.

P&G has created, as well, a space for men in the Zurich airport, called What Men Want, chockablock with fragrance.

Some brands have crafted pop-up shops to whip up a lather of excitement.

“The awareness about designers is not that big, so you have to explain,” said Eric Henry, BPI’s coo.

“It’s more about telling the story and making people dream,” continued Louis Desazars, president and ceo of Shiseido Europe Region and of BPI.

For its part, Bulgari has opened pop-up shops measuring between 390 and 555 square feet meant to convey the culture of the perfumery world in the courtyards of terminals in countries like Dubai.

Valeria Manini, managing director of Bulgari’s perfume business unit, maintained that the time travelers have once they’ve checked in at airports is among the few moments of freedom to shop left in modern life.

“They want to be entertained,” she said.

Executives have noted other changes in consumer appetites.

“The Chinese want more than just shopping,” said Olivier Bottrie, president of travel retail worldwide at the Estée Lauder Cos. Inc. “They want more than big cities. It’s about experience.”

Most executives at the TFWA show — where the number of visitors declined 2 percent to 6,701 and that of companies represented was down 3 percent versus the 2014 session — agreed that travel-retail players have a lot of progress to make when it comes to digital, a medium people use today mostly for live in-store price comparisons.

“For the industry in general, the train has passed,” said Carreau. “To catch up we need probably to involve new competencies.”

Still, despite all of the hardships racking the channel, executives continue viewing travel retail with optimism.

“I think the industry is still more than alive — it’s still growing,” said Clarins’ Tonneau, echoing the sentiment of most.