Cocodune is the latest direct to consumer e-commerce swimwear brand to launch online, following on the footsteps of Triangl, Solid & Striped, Bikyni and Chubbies. 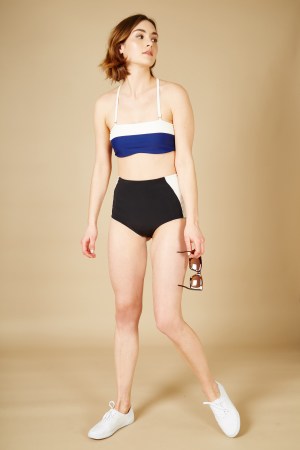 Triangl, Bikyni, Chubbies and Solid & Striped have all staked out digital businesses in the swimwear category and are joined today by Cocodune, which will make its debut at Cocodune.com, selling swim looks for about $100. The companies see a market waiting to be shaken up given its generally unappealing in-store try-on experience, especially for women, and the price/value proposition with high-end swimwear.

Matthias Metternich, founder and chief executive officer of Cocodune, said close to 100,000 people signed up to hear more about the product once the site goes live. He is trying to carve out a niche between mass brands and high-end designer looks while gaining profit margin with a vertically integrated approach that has him both making and selling the styles.

“This is indicative of the problem we’re trying to solve,” Metternich said. “The middle ground was so open. I also found that the quality even at the top end — the $800 suits — wasn’t as good as I thought we could achieve if we were vertically integrated. We took on the challenge from the start. If you want to change this industry, you have to control every aspect.”

The first collection, entirely handmade out of Italian fabric in Los Angeles, comprises nine styles that range from the “best basics” (a triangle top and a bralette) to more fashion-forward styles, such as a one piece with a plunging V-neck. Bikini pieces start at $95, with the majority retailing for slightly more than $100, and a “fashion” piece, such as the deep V-neck “Director” one piece, which costs $180. A series of accessories will also be available on-site, from an oversize tote to a $50 towel.

Metternich declined to say how much capital was raised to fund the venture, but he hopes to sell out of his inventory in year one. He maintained that the factory he works with can produce one million units a month.

Cocodune is simply the latest firm to think big when it comes to delivering swim looks online — aiming to shake up the category in the same way Warby Parker has in eyewear, Glossier in beauty or Bonobos in men’s apparel.

J. Christopher Burch has invested in two swim-heavy e-commerce ventures: Solid & Striped, which launched as a direct to consumer men’s swimwear Web site in November 2012, and introduced a women’s collection in spring 2014, and Chubbies, an e-tailer that sells men’s shorts and swimsuits.

He said the swim category is especially desirable right now. In addition to the high margins, the product plays well in content-rich digital environments such as Instagram and figures prominently in vacation and travel, which he said consumers are “obsessed with.” Influencers in the digital realm could also have a significant impact on their followers and many women prefer to try swimsuits on at home versus in a dressing room.

Burch said brands wanting to succeed online have to get “in the head of the consumer.” Being innovative isn’t enough — a start-up also has to build a brand at the same time.

“Swimwear as a category is growing at a faster speed than other categories. Supply chains are willing to make smaller pieces and consumers are willing to try new things,” Burch said during a phone interview from the Nihiwatu Hotel, the resort he owns on Sumba Island in Indonesia.

Burch is the chairman of his investment firm Burch Creative Capital and participated in two fund-raising rounds for Chubbies, in 2014, and again last month. The brand has raised more than $13 million date. He took a stake in Solid & Striped in late 2013, but declined to say how much he invested, calling it a “50/50 partnership.”

“From a tech point of view to cool [factor], the whole swimsuit industry online will continue to change as long as there is disruption,” Burch said. “It’s not unfathomable that there will be a swimsuit with flippers on the back to make you move faster.”

He explained that the way consumers buy swimsuits has already shifted. There are sales that occur weeks to a month before a trip or a season that are often researched. And then there are consumers who buy a bathing suit during their vacation.

Swimwear is a natural for the Web. Entrepreneurs see an often painful in-store shopping experience that can be improved online, while the small dimensions of swimwear keep a check on shipping costs.

Triangl, which specializes in vivid colored Neoprene bikinis, does all of its sales via its own Web site at Triangl.com. Triangl, which has nearly three million Instagram followers, has no plans to venture into wholesale or open a store.

Founded by Craig Ellis and Erin Deering in early 2013, sources estimated Triangl.com logged nearly $50 million in retail sales in 2015 and is primed for significant growth this year. Every suit on the site retails for less than $100.

Bikyni is also in the chasing shoppers with swimsuits priced at under $100.

The brand’s Web site launched its swimsuits last May with the tag line “You don’t need a better body, you need a better Bikyni.” Founded by Reformation alum Jude Al-Khalil, the company raised a $1 million seed round before launch and plans to raise a Series A in the near future.

Bikyni shares factories with brands that sell suits for several hundred dollars, but the brand also addresses the dreaded swimsuit shopping experiences head on by letting shoppers try on at home.

“We are able to access women from 15 to 40 who are either spending less on swimwear because they are more budget-conscious, but the biggest surprise is that we get women who [typically] buy very expense swimwear,” Al-Khalil said. “[These are] women who buy Eres to Mara Hoffman…but they like our aesthetic and believe in the quality.”

Some digital swim natives have expanded beyond the Web.

Solid & Striped, in particular, wants to appeal to both types of swimwear buyers. While 70 percent of sales now come from wholesale partners, the brand’s site at solidandstriped.com is the company’s biggest “door,” commanding 30 percent of overall sales. The brand’s bikini separates range from $78 to $88, with one pieces retailing for $158 to $168, and men’s suits ranging from $130 to $150.

In order to build brand equity, founder Isaac Ross moved Solid & Striped into brick-and-mortar stores fairly quickly. The line tested retail for the first time in the Upper East Side boutique Fivestory, a month after launch. It is now carried in more than 150 doors and 50 Web sites worldwide, including Barneys New York, Matchesfashion.com, Bergdorf Goodman, Selfridges and Lane Crawford.

But the Web remains near and dear to Ross’ heart.

“I’m hyper-focused on the direct-to-consumer business,” he said.  “The Web is precious. It’s our only direct point of contact with consumers.”