The U.K. brand is embracing its storied history at its new site, a slightly larger location on 57th Street that spans three floors. 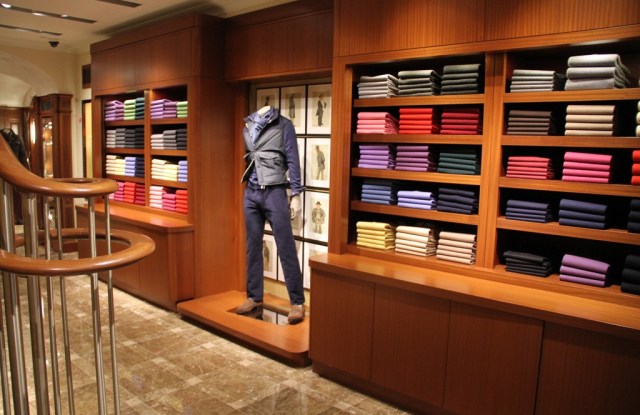 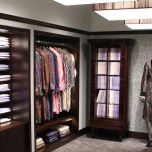 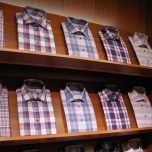 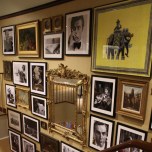 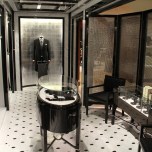 The U.K. brand, which is celebrating its 125th anniversary this year, has relocated down the block, into a slightly larger location that spans three floors and showcases the entire breadth of the company’s offering. The boutique also features an array of historical memorabilia — everything from Ronald Reagan’s paper suit pattern and a Liberace ruffled shirt from the Fifties to one of the first bengal-stripe formal shirts and Charlie Chaplin’s cane. There is a wall on the ground floor featuring Spy illustrations that have been replicated on the wallpaper inside the fitting rooms in gold leaf.

“We’ve gained width with this shop,” said James Fayed, director. “It’s given us breathing room. And it’s come at a really good time for us, since we’re 125 years old.”

Over the years, the quintessentially English brand has dressed such luminaries as Charlie Chaplin, Sir Winston Churchill, Prince Charles and even James Bond. In the States, it is known primarily for its furnishings.

Turnbull & Asser operates stores on Jermyn Street and Old Broad Street in London, as well as Beverly Hills. The brand’s shirts and ties are also sold in Neiman Marcus and just got picked up by Bloomingdale’s, which is showcasing a full collection in four doors around the country, Fayed said. “It’s a great way for us to test the waters,” he added.

The first floor of the new store, with its marble flooring and wooden cases that mimic those on Jermyn Street, offers a cashmere wall with sweaters in 24 different colors. That is followed by a large assortment of socks in cotton, cashmere, wool or merino wool. “We’re one of the only companies that does sized socks,” Fayed said, “over or under the calf.” The selection also includes a “proper hunting and shooting sock” that is exclusive to the New York store.

The rear of the first floor showcases the sportswear collection, with sport coats, casual outerwear and slacks. It also features a new collection of elevated product, Turnbull Black Label, exclusive to the store and to the company’s boutique in Harrods. The limited edition products include a bomber jacket with raccoon fur for $2,900, and a reversible cashmere coat for $3,250. Only 20 of each item were made.

“This is a new realm for us,” Fayed said of the younger-themed, more modern collection.

The second floor is a monument to the company’s haberdashery roots. There are several displays of shirts and ties, including a case of limited edition shirts replicated from vintage patterns from the company’s beginnings over a century ago. They’re numbered, with only 125 of each produced, and retail for $295. The regular shirts, which are available in classic or exclusive models, start at $195. There is also a small selection of Turnbull Black Label shirts, which feature black mother-of-pearl buttons, as well as cashmere ties.

“We really wanted to make a statement here,” Fayed said. He pointed to the “interactive” fixtures that allow customers to open drawers to browse through the various patterns available. “It’s a very accessible store,” he said.

The back of the floor is devoted to sleepwear, another category on which Turnbull has built its reputation. The back wall of the area features 18,000 mother-of-pearl buttons hand-sewn on the wall.

The staircase between the second and third floors features photographs of some of the company’s most famous customers, including Frank Sinatra and Humphrey Bogart, interspersed with oil paintings owned by Fayed’s mom. Turnbull & Asser has been owned by the Fayed family since 1982. The family is known for having owned Harrods, and now owns the Ritz. James Fayed’s younger brothers also produce a men’s line called Bespoken.

The third floor focuses on the company’s bespoke efforts in shirts, ties, belts, gloves, socks and umbrellas. Vintage Rolex watches will also be part of the mix here.

In the center of the floor is the formalwear room with tuxedos, smoking jackets and other items. “We’re probably the only shop on this island that does proper top hats and tails,” Fayed said.

The rear of the floor is the tailored clothing department, offering off-the-rack suits made in England and made-to-measure suits made by Brooklyn-based Martin Greenfield. “He understands an English garment,” Fayed said of Greenfield, pointing to the high armhole, hard shoulder and “very military” silhouette. This room also features a case with a replica of Winston Churchill’s velvet smoking coat.

Turnbull has had a store in New York City for 14 years, and Fayed said he expects the new unit to post increased volume. He declined to be more specific. “Our walk-through traffic will be a lot better,” he said. “We were tucked away before.” Fayed said down the road he hopes to add more brick-and-mortar units in the States but there are no specific plans. “The future of the business is 100 percent in the U.S.,” he said. “We’re a new business here, but one with an amazing shout — 125 years of history is a great foundation.”