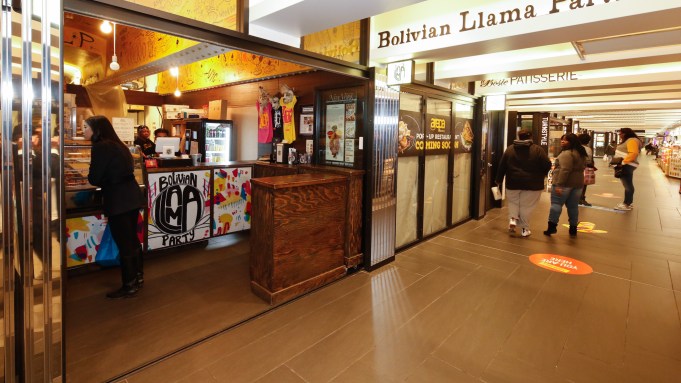 This year, Turnstyle marketplace, a year-old recast stretch of the subway station underneath Columbus Circle, accrued a slew of new businesses, elevated its program of high-energy activities and tapped Urbanspace to manage the project. Urbanspace manages other markets around town such as the Holiday Shops at Bryant Park, Urbanspace Vanderbilt, and the Madison Square Eats and Broadway Bites pop-up markets.

Among the new arrivals at Turnstyle marketplace are Arepa Factory for gluten-free food; 16 Handles frozen yogurt and smoothies; Sara Designs for jewelry and accessories; Farm to People food and gifts; Panda Bubble Tea, which is known for its “fizz tea”; Champion Pizza, and the NYC Subway Line for transit-themed clothing and accessories. The Shoeshine Guild shoeshine kiosk arrived in March, sometimes manned by owner Kevin Tuohy donning spats and a cap, though he has a team of shoe shiners.

Shops that closed include The Pizza, Gastronomie 491, Ellary’s Greens, Bosie Patisserie and Fika.

Musicians from Juilliard and Blue Note Jazz Club regularly perform. Monthly Crunch and Zumba classes are held on the colored tiles in the center of the subway corridor between By Suzette and Georgia’s Bakery, and there is an appeal to dog lovers. In April, a photography exhibit of dogs in Cuba was staged, and Dog & Co. hosts Saturday adoptions working with rescue groups in the city and held a dog fashion show during New York Fashion Week.

Turnstyle’s offering is as curated as any retail venue, and it’s a format that could be cloned to other subway stops. The 27,000-square-foot Turnstyle enlivens the sometimes dreary and dehumanizing subway experience, though there have been enhancements at many other subway stations with the addition of artwork, sculptures, musicians and security. Each day, about 90,000 people shop or pass through Turnstyle, which has seven entrances and exits, is accessible via 57th and 58th Streets and Eighth Avenue as well as via the Time Warner Center exterior escalator.

Most New Yorkers and tourists don’t know about Turnstyle until they discover it getting on or off the subway. There’s little signage above ground, which concerns Susan Fine, principal, founder and managing member of Turnstyle marketplace. “We don’t need to be one of the best kept secrets in the city,” Fine said during a recent tour of the space. “We’re working on getting the signage.” It’s minimal and barely apparent above ground, though that adds an element of surprise to the subterranean experience.

Fine, who is president of her own Oases Development firm and a former Olympia & York executive, led the Metropolitan Transit Authority’s development of the Grand Central Market. She explained that Turnstyle helps the MTA monetize the underground system by paying rent to the MTA and charging rents to merchants. Typically, they sign five- to 10-year leases and pay about $350 a square foot, including $300 for rent plus about $50 for operating [common area] costs.

Asked why Urbanspace was brought in, Fine replied, “The logic for Urbanspace is simply that we are one year old, and it is a great time to find a management and leasing company who can shepherd the asset.”

Turnstyle is geared toward the urban gourmand on the go, people who want a quick bite and don’t mind spending a few extra minutes in the subway system. The downside — a greater number of strap hangers bring food and drinks on the subway, posing the potential for spillage.

Successful retail requires providing a unique experience. In the case of Turnstyle, it’s the boutique-y, contemporary, artisanal, mom and pop-ish character that sets the tone, though there is a touch of the more mainstream, with the subway system’s first Starbucks and Dylan’s Candy also present along the 375-foot-long stretch. Doughnuttery and The Nutbox complement the alternative coffee options.

“We’re doing great. People love it. Pressed Juicery is selling hundreds of thousands of dollars in juice a month,” Fine said. “Turnstyle has become more and more of a destination.” People are also shopping spontaneously, she added. “I consider flowers, chocolates and such things to be impulse buys.”

Other retail venues, she suggested, could learn some lessons from Turnstyle. “I have an abiding belief that streets should have much more than drug stores and banks. There can be a vitality and energy even underground.”

The setting is durable, with graffiti-proof paint, “antislip” Italian porcelain floors, and U.S. Homeland Security-approved double-laminated, shatter-proof glass and Nanawall folding glass wall systems that keep heat in and open up to cool off the space. Stainless steel chevrons cover the girders, mirrored ceilings create the illusion of greater height, there are multicolored tapas tables, and constant music, live or piped in. The flowers are sold by the entrance, suggesting a change in the atmosphere right at the front door. With the warm lighting and industrial fixtures, there’s a sense of being above ground, underground.

“What we did isn’t that hard,” Fine said. She put the cost of creating Turnstyle at $14.5 million.

Whether the concept can be replicated or adapted to other subway stations remains to be seen. Fine suggested that Bryant Park, Barclays Center and the passageway from the L stop on 14th Street and Sixth Avenue to the IRT line on 7th Avenue, would be suitable to versions of Turnstyle, among other locations, though she added that there is nothing to announce at this time.

“I think we and companies like Urbanspace have inspired a movement to look at underutilized space to showcase authentic small brands that you don’t run into every day,” Fine said.