It's the first fashion investment for Banks through Fierce Capital, which was set up as a vehicle to provide seed funding to early-stage start-up firms. 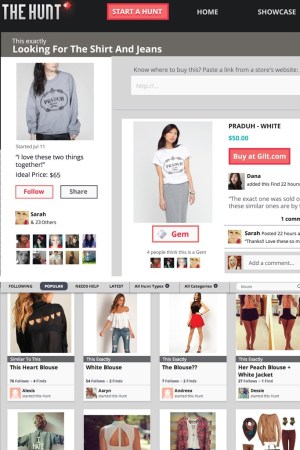 Supermodel and businesswoman Tyra Banks has joined actor Ashton Kutcher as an investor in the community-driven shopping start-up TheHunt.com.

This story first appeared in the July 15, 2013 issue of WWD. Subscribe Today.

“I created Fierce Capital LLC because supporting female owned, led and targeted businesses is extremely important to me. We are excited about The Hunt, our first fashion investment, because it truly sucks to discover a great style item but not be able to find and buy it. The Hunt solves that fashion dilemma in a fun and innovative way,” said Banks.

The Hunt makes it easier for shoppers to find out where to buy items featured in photos — whether sent directly to TheHunt.com or seen on photo-sharing sites such as Pinterest, Facebook, Instagram and Tumblr — through the help of The Hunt community. Users who recognize items tell others where they can buy the product.

Banks said, “What I love about The Hunt is that women help other women find their perfect outfit [head-to-toe]. I am excited to be part of this new approach to collective retail and styling.”

According to Weingarten, the company is in the midst of conversations with other potential investors for another round of financing.

The funding raised so far has been used to hire more engineers and designers to build out the “fun experience” of the community site, Weingarten said.

It’s no surprise that he also sought investors with fashion, beauty and entertainment expertise.

Having celebrities and entertainment influencers who have a certain following helps bring those individuals to the community shopping site, which has helped the site’s business model. It collects fees using an affiliate program when there is an actual conversion on purchases through The Hunt. Because users also have a specific intent, that places them deeper into the purchase channel, which helps boost conversion rates.

Many of these high-profile angel investors also bring something else to the site: their ideas on how to better the platform. Kutcher, an experienced start-up investor in firms such as Fashion GPS, StyleSeat and Fab.com, has already suggested improvements to the design-user interface, with some ideas being implemented. Weingarten expects Banks to do the same.

“She intends to be extremely active and in no way a passive investor. From her acumen in style and fashion to her intuitive and innate sense on how the community should be guided over time, she has lots of ideas,” the ceo said.

Banks can also provide some thoughts on nurturing early-stage ventures as well as managing disruptive innovation. Those were topics that were part of coursework at the Owner/President Management Program at Harvard Business School. Last year, Banks earned her certificate in the program after completing a curriculum presented in three-week sessions over three years.

According to Weingarten, the site has “hundreds of thousands of active members” and one million monthly unique visitors. The average time spent on each visit to the site is 16 minutes, whether starting hunts, solving them or both. About 95 percent of users are female between ages 16 and 35, with 70 percent of users from the U.S. Of the 30 percent on the international front, users from Australia, Canada and the U.K. make up the top three markets followed by their counterparts from Germany and France.