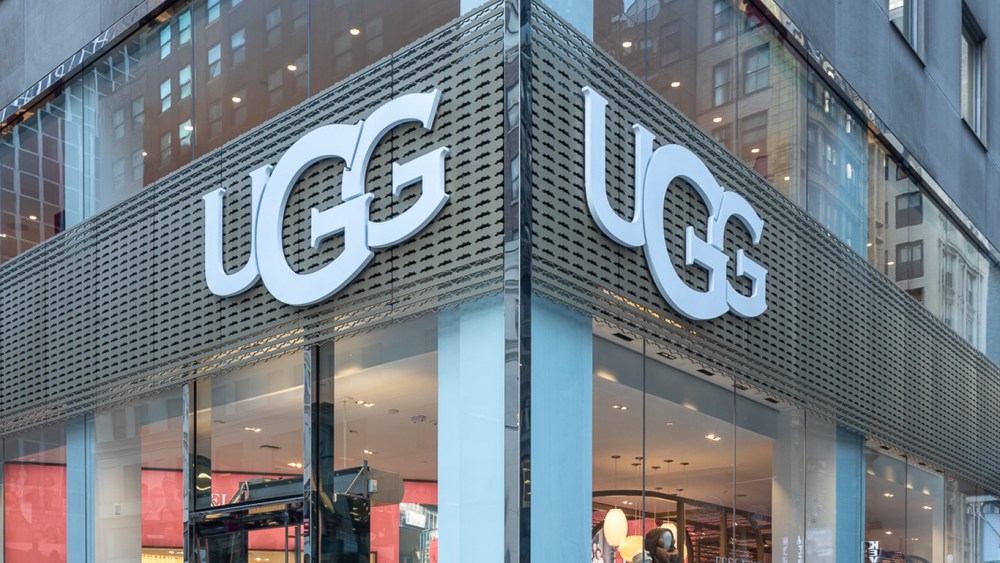 NEW YORK — Ugg may have its roots in Southern California, but the brand has chosen New York City to unveil its global flagship.

The two-level, 12,842-square-foot store on the corner of 45th Street and Fifth Avenue, which opens Thursday, is intended to showcase Ugg as more than simply a footwear brand. That’s clearly evident upon entering the store, since the brand’s new ready-to-wear collection, which launched in September, is front and center, alongside its signature shoes and accessories. The store also carries home products.

The unit was designed by Florencia Pita of the architectural firm Quezada, and speaks to the brand’s aesthetic of being cozy and comfortable. From the sheepskin coats, fleece hoodies and cashmere sweat suits to the fuzzy mittens and waterproof ankle boots, the store offers a range of products and price points for men, women and children. The apparel and footwear is merchandised together through the unit to drive home the message of Ugg as a lifestyle brand.

The company’s first concept store opened in SoHo 14 years ago, but this new design is seen as a “tipping point for the brand,” said Gerald Marceda, senior director of retail.

He said the opening of the Fifth Avenue store marks the culmination of two years of planning and work. The company’s store on Madison Avenue and 58th Street was coming to the end of its 10-year lease and the decision was made to move to Fifth Avenue. The pandemic only marginally delayed the opening, which was expected to be in September, he said.

Marceda said the design of the store, which is LED-certified, is intended to reflect the brand’s California roots, and takes inspiration from the Eames House in the Pacific Palisades neighborhood of Los Angeles. The main floor is light and airy and is “reminiscent of California outdoor living,” he said. The second floor is intended to be “more intimate and cozy.”

One striking feature of the main floor is an “unusual pathway,” he said, between the apparel displays inside the front entrance created from custom shingles similar to those found in the brand’s logo. That same design is used on the exterior.

All of the fixtures were made in L.A. and custom panels behind the cash wrap and around the store mimic the outsole of the Ugg signature boot. “It’s subtle, but pays homage to our roots,” he said.

In the back corner of the main floor, right next to the escalators, is a “flex room” that will be used for product launches, collaborations or other focus products. In the past, the brand has partnered with everyone from Telfar and Heron Preston to Jeremy Scott, Molly Goddard and Feng Chen Wang and this would one of the sites where that product could be featured. For the opening, the space will be used for gift wrapping.

To draw people to the second floor, the lighting can be customized and there will be artwork at the top. In June, for instance, to promote the brand’s Pride product, rainbow lighting will “entice” shoppers upstairs, he said.

The second floor highlights men’s and kids merchandise as well as a home area. A “cozy shop” features “perfect quarantine apparel” such as sweaters and sweatpants; there is an area devoted to technical performance product for winter such as gloves and shearling ear muffs, and a classic room where some of the brand’s most-popular pieces are houses.

Among Ugg’s biggest sellers these days are a clear waterproof boot — the Classic Clear Mini — with a shearling liner that retails for $150. The boot is available in an array of colors and there are complementary handbags as well.

For holiday, the brand is offering a collection emblazoned with sequins on boots and platform shoes among other products, intended to appeal to a younger customer.

Overall, women’s accounts for 75 percent of Ugg’s sales, with men’s and children’s splitting the other 25 percent.

Ugg, which is owned by Deckers Brands, has been undergoing a rebranding intended to reconnect it to its California roots. The brand was founded in 1978 by an Australian surfer on the coast of California.

Dave Powers, president and chief executive officer of Deckers, said sales of Ugg in the second quarter ended Sept 30 increased 2.5 percent to $415 million from $405 million in the same period last year. He said that the brand’s sales have historically been driven by classic Ugg product to wholesale accounts, but this year, the brand is having success with full-price sell-through of its Fluff line of slipper-sandals at its own stores and other retailers. This product is especially popular with young people, he said, and Ugg is extending the franchise beyond women’s to men’s, kids and complementary products such as the Disco Slide and Fluttita.

The quarter also marked the debut of the brand’s first ready-to-wear collection. Although it has offered loungewear, sleepwear and outerwear for several years, this is its first true rtw line. Nordstrom was the exclusive launch partner.

“While ready-to-wear is not expected to drive significant revenue volume this year, sellthrough has been impressive, and we’re encouraged to see cross category purchasing in ready-to-wear and footwear products,” Powers said. “Given the positive response from primarily younger consumers, we feel this speaks well to the long-term lifestyle opportunity for Ugg, and our teams are already working to expand ready-to-wear with additional products and partners.”

He said right now, rtw accounts for less than 10 percent of overall sales but he believes there is “a lot of opportunity” for this category in the next three to five years.

So expect rtw to continue to have a home in the New York flagship as well as the company’s other stores in the U.S. Overall, Ugg operates 55 stores in America — 30 full-price and 25 outlets — but the new Fifth Avenue store is the largest. Marceda said the plan is to use the design as a “roadmap” for stores in other cities such as London, Los Angeles, Shanghai and Beijing, as well as in shop-in-shops at wholesale partners such as Macy’s and the outlet stores.

And while the pandemic forced Ugg to take a “little bit of a pause,” Marceda said it also allowed the brand to “take a fresh look at the market.” While he acknowledges that traffic in New York City has not recovered since workers and residents left town during the pandemic, he’s taking a long-term view of the future. “We’re going to be here 10 years,” he said.