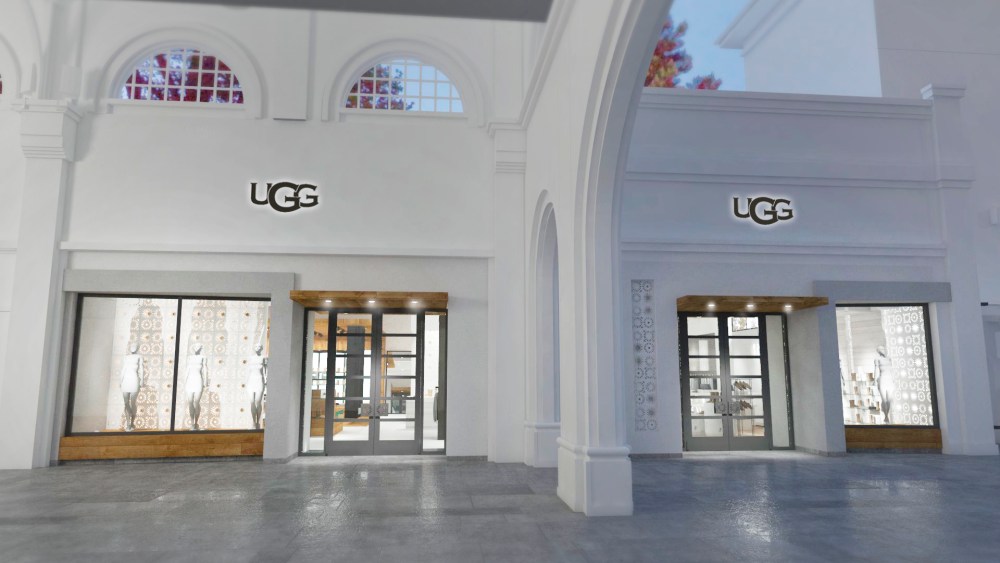 Ugg is crossing its fingers on a halo effect radiating out from a new concept store design set to bow over the weekend.

The company, part of Deckers Outdoor Corp., is focused on elevating the brand at retail with carefully merchandised sections dedicated to playing up its full range of product in footwear, loungewear, accessories and home goods. The first of the new concept stores will debut Sunday at Disney Springs in Florida.

“Our existing store fleet was reflective of a store concept that was developed in 2006,” he said. “It’s a little much and the brand’s changed, consumers change and product lines change in just two years. Ten years felt like we were a little bit behind the ball.”

The old design, unveiled with the company’s first retail store in SoHo in New York in 2006, also reflects a different period in time for the business, Bergstrom pointed out.

“In 2006 Ugg was a pretty powerful, growing shoe company. The perception of the brand and the internal effort and category focus of Ugg in 2006 was primarily on shoes — as it should be. It’s our home category,” Bergstrom said. “But 10 years later, Ugg has evolved from a pretty big shoe company to a massive lifestyle brand that is now addressing multiple categories across a number of areas of life and, as such, the retail environment needed to reflect the offering of the brand.”

It’s also a strategy that accommodates an existing customer base while making appeals to a potentially new demographic for the brand as it seeks growth for its parent.

Ugg, for the 12 months through March, saw sales grow 12.6 percent to $1.49 billion and in April named Rosie Huntington-Whiteley the first-ever brand ambassador for its women’s line as the company updates its Classic Boot style.

Video loops, via a digital content delivery system, will play in store and mirror what one might see when looking out a window, with the goal of setting the tone for experiential shopping, Bergstrom said.

“We see consumers really looking to shop multichannels and that’s where we shifted our strategy a couple years back,” said Gerard Marceda, vice president of North America retail at Deckers.

The stores, outlets and e-commerce must be clearly defined, and thus the concept design will serve as a halo for the brand, he added.

“When I look at the concept channel, that should be the pinnacle,” Marceda said. “The purpose of these stores has shifted slightly so it’s not strictly about maximizing sales; it’s about being directional. The assortments need to be really procured and unique and different and you have to utilize the concept channel to do things you can’t do in other channels, like introduce new products.”

The Orlando store totals 2,828 square feet, but elements of the new design can be applied to any size, from 500-square-foot concession spaces to 4,000 square feet or more, Marceda said. The existing fleet of 150 stores worldwide will eventually be upgraded as their leases, typically inked for 10-year terms in the U.S., come due.

The Orlando store is expected to be followed by doors in major cities, Marceda said, such as Shanghai, the Fashion Show mall in Las Vegas, Japan, World Trade Center in New York and Chicago.

Next year the company is eyeing San Francisco and is also in discussions to renovate the store where it all started, in SoHo.