The Fashion Division luncheon raised in excess of $850,000. 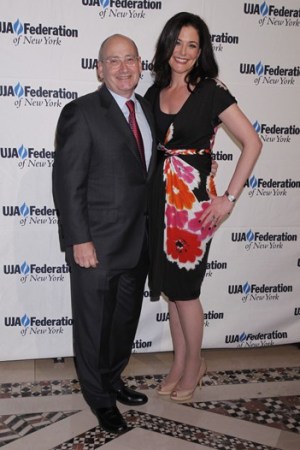 Michael Gould has been chairman and chief executive officer of Bloomingdale’s for 20 years, and Frank Doroff has been along for the ride the entire time.

“Frank was my first hire a month before I came to Bloomingdale’s,” Gould recalled at The UJA-Federation of New York’s Fashion Division luncheon Tuesday at Cipriani 42nd Street. “I never thought of it as a hire. I thought of it as a blessing. Frank always gives his people the opportunity to be more than they thought they would be.”

“It was over a bowl of pasta in his backyard in L.A.,” when Gould made the offer, said Doroff, Bloomingdale’s vice chairman who was honored at the luncheon, one of the organization’s most successful, raising in excess of $850,000.

Doroff said he hesitated getting involved. “I hadn’t been very active in the organization. I thought it would be one of those deals where everyone is uncomfortable.” But he was convinced to visit the YM & YWHA of Washington Heights and Inwood, which is a beneficiary member agency of UJA.

“The UJA has been supporting that Y for the last 93 years,” since when it opened, Doroff said, adding that it has housed a large number of Holocaust survivors with 100 apartments for the aged attached to the Y. “It’s given them the most important thing you can give someone, dignity. It’s like no other Y in the world. This is a cause I am now truly committed to.”

Steven B. Tanger, ceo of Tanger Factory Outlet Centers Inc., was also honored. “He changed the whole nature of the outlet business, from dumping grounds to a chic, new channel of distribution for upscale designer brands and retailers,” said Laurence Leeds Jr. of Buckingham Capital Management.