Indeed, since 1999, when Lyn Kirby joined Ulta Salon, Cosmetics & Fragrance Inc. as CEO, the beauty retailer has been working on keeping competitive. 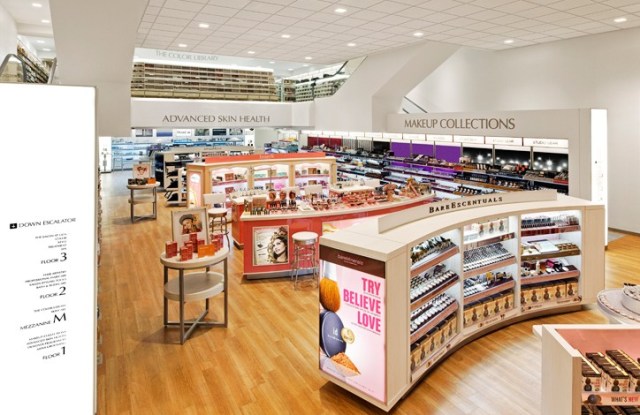 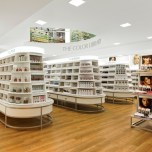 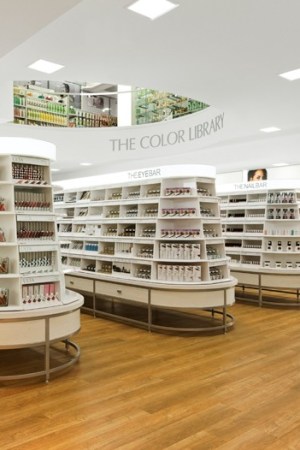 Indeed, since 1999, when Lyn Kirby joined Ulta Salon, Cosmetics & Fragrance Inc. as chief executive officer, the beauty retailer has been working on keeping competitive — mainly in regard to its product mix — in an environment that is ruled by Sephora, department stores, a never-ending flow of boutiques and, of course, the mass market. But, despite the competition and an economy that is pulling no punches, Ulta is prevailing: The retailer even managed to pull off comparable-store sales growth of 3.7 percent in its most recent quarter ending Aug. 2, attributed to both higher ticket sales and traffic flow.

In a dramatic display of celebration — the 18-year-old company, which is headquartered in Romeoville, Ill., and operates 283 stores, is about to open an 18,000-square-foot unit on South State Street in Chicago, one that spans four floors, boasts a spiral staircase, new mass market merchandising, a 5,000-square-foot salon and new “boutiques” for popular prestige brands. The store also marks Ulta’s first urban location.

“We have price points for everyone, and we are not seeing a trade down,” said Kirby in a recent interview. “We like to be known as the category killer of beauty but with a specialty store experience.”

Ulta, which generated $912.1 million in fiscal 2007, an increase of 20.8 percent, is, according to Neely Tamminga, a senior research analyst at Piper Jaffray, earning some of its success at the expense of other channels.

“Part of our thesis on Ulta as a company is tied to the fact that the department store is ceding share in multiple categories and beauty is no exception. Ulta is benefitting not only by bringing in more prestige brands but by also being more customer centric…as Generation Y enters into its earning years. Specialty boutiques have catered to them.”

Ulta’s broad assortment (its product portfolio is filled with more than 500 brands across prestige and mass categories) offers it an opportunity to capture not only the prestige-brand customer but also the “masstige” consumer. And, it is continuing to pursue prestige deals.

In a Piper Jaffray note disclosed on Oct. 7, Jaffray said that Ulta “is in the midst of growing its prestige brand portfolio through securing new brands. Should this trend continue, we believe Ulta could likely benefit from incremental average ticket gains.” Ulta remains Piper’s top unit-growth firm in its coverage, the note continued, with a projected outlook for a 25 percent unit year-over-year growth rate through fiscal year 2011. “We are encouraged that the company’s growth profile remains intact despite the broader economic slowdown,” wrote Tamminga.

Kirby said she plans to close 2008 with 311 units, and that third-quarter estimates and goals have not been changed due to the recent economic plunge.

The new store, which has been under construction since January, is sure to let passers-by know what is going on inside 114 South State Street, most notably with a four-story image spanning the building’s facade that shows a glamorous woman inviting the public to check out the store.

“When you walk in on the first floor, that is where the excitement is: prestige cosmetics,” said Lynn Buhler-Brandon, Ulta’s district manager in Chicago.

“Here, you will immediately see three boutiques,” she said, explaining that Bare Escentuals, Benefit and Smashbox Studios each have their own store-in-store there, manned by brand-trained beauty advisers. “Each is also beautifully branded to portray the essence of those brands,” said Buhler-Brandon. Additional prestige cosmetics brands, such as Lorac, Urban Decay and Too Faced are merchandised either on brand-specific gondolas or on a wall surrounding the boutiques. Designer fragrances are also on the first floor, such as Chanel, Ralph Lauren, Giorgio Armani and Estée Lauder. “In total we carry about 350 fragrances here. And, unique to this store are two exclusively branded fragrance boutiques, one for Ralph Lauren and one for Estée Lauder,” and within each is a place to highlight the latest, hottest fragrance. Currently, Notorious is featured in the Ralph Lauren boutique and Estée Lauder Sensuous is in the Lauder boutique.

An Advanced Skin Care department, men’s fragrances and men’s skin care is also on this floor. The Advanced Skin Care section has an area specifically for the Dermalogica brand, as well as for skin mapping “to give advice on what suits a consumer’s needs,” said Buhler-Brandon. The skin area also features Perricone, Murad, Kinerase and NeoStrata.

It should be noted that the “store is very brightly lit, very clean and has a branded feel to it, ” she said, adding that fixtures feature brushed chrome for a sleek but “not cold” look. A natural section is here, too, but not a big one.

“She wants to look better first. It has to be great products,” said Kirby.

The next floor is the mezzanine, a 2,000-square-foot area called the Color Library, that features mass market brands, including Revlon, Neutrogena, L’Oréal, Maybelline, as well as Ulta’s private label brand. Here, Ulta is merchandising products by usage (i.e., lip, eye, nail, face) rather than by brand, complete with testers. The mezzanine looks over the entire first floor. This new merchandising system is now in about six Ulta stores.

“Mass is self service,” said Ulta’s Kirby in a recent interview. “This will be a more fun experience.” She said the aim was to reinvent mass with the four “E’s”: esthetics, education, entertainment and escape.

The second floor is dedicated to professional hair care and appliances, such as Redken, Paul Mitchell, Matrix, Tigi, PureOlogy, T-3, Hot Tools and Conair. What Ulta refers to as “hair artistry” brands are also here and include Frédéric Fekkai and Warren-Tricomi. Styling tools are displayed as testers so guests can touch and feel them, and feel “the force of a blow-dryer,” said Buhler-Brandon.

The third, and top floor, is where the salon is located compete with 12 chairs and a spa. It is reached by a spiral staircase that allows a brief glimpse of the salon.

“We believe that if she can’t see what’s up the stairs, she won’t go,” said Kirby.

All types of treatments are available at the salon, including cut, color, facials and waxing.

Kirby is not arrogant to believe Ulta will not be up against a challenging holiday period. “Gas prices are playing into the shopping trip,” she said.

Jason Gere, a senior analyst at Wachovia, views Ulta’s new South State Street store as a way for the chain to test out its successful merchandising strategy in a bigger box and to not be limited to its current 10,000-square-foot store average. It seems Ulta may need more real estate options as it embarks on opening 81 new stores next year and another 100 units in 2010.

“This is a way to see if they can make the model work with any size,” he said. “It also may represent more real estate opportunities. I really think the success of the format has been what is in the store not the 10,000 square feet. It gives them more options to pick more real estate sites and to do more demographics research in their due diligence.”

Kirby admitted that she “wants to learn with this one,” referring to the store, which she will not refer to as a flagship since they “usually are expensive but don’t produce.”

Gere said that Ulta is not exempt from what the economy can do to a business, but it is well poised to tackle hardship: “They are not recession proof but they are recession resilient, like the beauty category. Having the one-stop shopping concept has been a help and also being away from the malls — the outlets that are closer to home as opposed to making separate trips help.”

Gere is also impressed by Ulta’s comps and he believes the chain’s promotions are helping to drive sales.

In a recent proprietary survey of 25 retail locations (10 Ulta, 10 Sephora, and five freestanding boutiques), Gere learned that the distribution of Bare Escentuals Getting Started kits “could modestly benefit sales at Ulta locations more immediately” since most consultants there indicated that the sampling initiative has been very popular to date, with consumers rarely leaving the store “empty handed.”