Under Armour Lands in Boston With Tom Brady and Gisele

The Patriots quarterback and his wife turned out at the opening of the brand's new flagship. 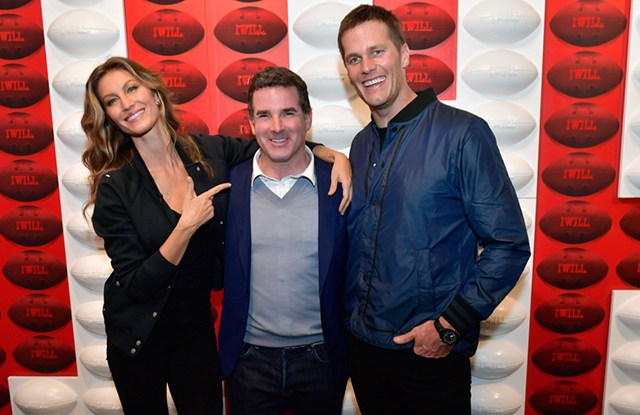 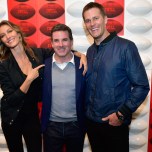 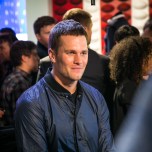 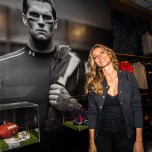 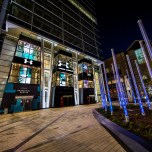 BOSTON — For months, Bostonians have passed under twin colossal images plastered over a construction barricade: Tom Brady, about to throw a pass, and Gisele Bündchen, sweat-drenched, kick-boxing.

On Wednesday night, with the barricade gone, the New England Patriots quarterback and his model wife showed up at the opening party of the 19,000-square-foot Under Armour flagship in the Prudential Center on Boylston Street.

Brady has been associated with the Baltimore-based brand since 2010, when he signed an endorsement deal in exchange for an undisclosed equity stake in the company. Keeping it in the family, Bündchen inked a deal to become the face of its women’s business in 2014. She recalled Under Armour founder and chief executive officer Kevin Plank coming to their Boston apartment to pitch her on the “I Will What I Want” campaign. In it, Bündchen wallops a heavy bag and whips a Bo staff in a bare studio while social media critiques (“Is modeling now a sport?”) project on the background behind her.

“One of my favorite shoots ever,” she told WWD. “It was raw and refreshing. No hair and makeup.”

For the Under Armour party Wednesday night, she threw a $109 varsity fleece bomber over black jeans and over-the-knee boots, but emphasized that her days, which begin at 5:30 a.m., are kid-focused and extremely casual.

Asked if she’d launch her own fashion or beauty brand, she responded, “I had 22 years in fashion and had so much fun co-creating things, but I’m really focused on the kids now. Tom works so much. The kids need me, so fashion is there, but it’s like the third priority now. Number one is kids and family.” When the kids are a little older though, she hinted, “I have lots of plans.”

True to her word, she spent her free moments in the store scooping up teeny base layers and sweatshirts for her kids — John, 9, Benjamin, 6, and Vivian, 3.

The Boston store maps out how Under Armour, on track to hit $4.9 billion in revenues this year, intends to grow. Footwear is given prominent position on both floors (“We’re really declaring ourselves to be a footwear brand,” said Susie McCabe, senior vice president of global retail, during a walk-through on Wednesday.) Throughout, the brand is priced for value: Many running sneakers sell for roughly $100, and things like women’s down vests were at $124, a tick lower than some competitors’ offerings. The merchandise was presented in smart, user-friendly ways, particularly on the women’s side. Body forms showed complete, functionally based looks set on broad tables stocked with the component pieces. To demonstrate its heat technologies, for instance, Under Armour created a display of three running looks designed for cold conditions ranging from chilly to “brutal.”

McCabe listed the company’s “three pillars” as “get big fast,” “shoes on feet” and “retail as a core competency.”

The company has 18 full-price stores in the U.S. Globally, it plans to open 200 stores annually for the next several years, McCabe said, with China being the biggest opportunity. She declined to specify sales projections for the Boston store.

The flagship mixes global brand DNA with local rah-rah touches to inspire social media sharing. At the entry, there’s a van-sized torso wearing a Patriots shirt (the torso has additional wardrobe, depending on the season, according to McCabe.) The first floor dressing suite is wallpapered with a Freedom Trail-based running route. The dressing rooms are large and surprisingly luxurious for an athletic brand. Designed like a walk-in-wardrobe, they feature tiered racks, niches for folded clothes, lighting, carpeting and backdrops (athletes, Boston landmarks) suitable for selfies. “We are really trying to create these pause moments,” McCabe said.

The first floor (8,000 square feet) holds men’s, women’s, golf and basketball, and a phone charging station that McCabe says has been popular in the Chicago store. (Shoppers enter their data, including an e-mail, and get a locking drawer in which to charge their device.) The charging station “increases dwell time,” McCabe noted, and also captures customer data. Ditto and the Optojump fitness tester, which customers can use to measure their speed and power.

In addition to a large shoe salon, the second floor (11,000 square feet) houses a merchandise shrine to Boston sports, plus boys’, girls’, and the company’s first dedicated shop-in-shop for UAS, the Americana sportswear collection designed by CFDA winner Tim Coppens, who serves as UAS’ creative director.

While the rest of the Under Armour store is ablaze with giant screens and sport graphics, the 1,100-square-foot UAS space is unabashedly a fashion play. It’s what a function-minded, heritage-inspired collegiate wears outside the gym, according to Ben Pruess, president of sport fashion. The space features gray-and-white striped walls, mannequins posed like models (rather than sport engaged) and an Ivy League color palette: burgundy, navy, gray, white, with pops of yellow.

The collection debuted in mid-September at New York Fashion Week. Based on selling since (Barneys, Mr Porter and Under Armour in New York and Chicago), the best pieces have been the women’s wool Rugby coat ($399), and for men, the Rowing blazer ($219) and an oxford shirt ($129) with a stretch cuff gusset for performance sleeve rolling. Brady wore the UAS Men’s Coaches jacket ($149) to the opening party.

UAS is seen by Plank as a major growth vehicle for the brand. At the WWD CEO Summit in New York last week, Plank said the brand’s goal is to extend the same attitude it has in activewear to sportswear. “Lifestyle/sportswear is a massive opportunity,” he said.

Pruess said it “wasn’t arbitrary that we chose Boston to create our first UAS store. We see connections to American heritage, East Coast universities, and lots of young, ambitious people whose drive doesn’t end when they leave the field.”

“Ambition” is an important word to Under Armour, which has shown a knack for finding unsung, determined athletes, and signing them relatively early in their trajectory. That includes ballerina Misty Copeland, Stephen Curry of the Golden State Warriors, and, in some ways, Brady. His draft number, 199, is sculpted out of footballs on the second-floor landing. He and Bündchen posed in front of it.

“To think that was his draft number and he’s turned out to be one of the greatest ever,” McCabe ruminated. “It’s the perfect fit for our brand, our underdog spirit. We couldn’t have written it better ourselves.”