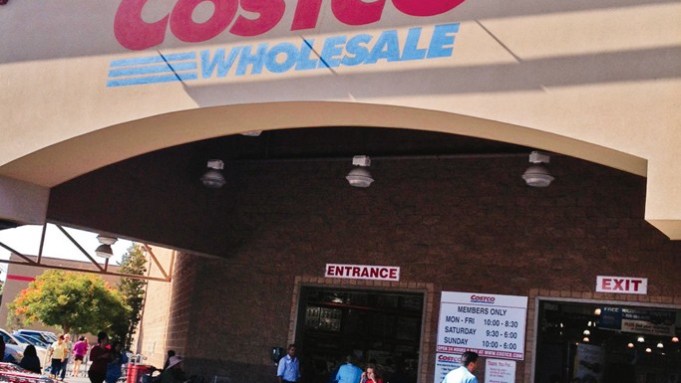 In a stand-up routine, comic Zach Galifianakis gets laughs at Costco’s expense. “I was leaving Costco today and thinking to myself, I hope I have seven years of dandruff,” he deadpans. The joke is funny because it rings so true. Costco Wholesale is a place for big things: big merch, big bargains, big stores (they run up to 205,000 square feet) and big business. Costco’s net sales were close to $103 billion in the year ended Sept. 1, and it consistently ranks as one of the largest retailers in the country.

California is home to some 120 Costco stores, about one-third of the total in the U.S. and Puerto Rico, and over 100 more than there are in New York. Perhaps the imbalance is why Costco can get short shrift in media coverage out of New York, although the situation is partially because Costco makes no press-relations efforts. Once when I mentioned possibly writing about the chain to a New York editor, the editor belittlingly compared it to the likes of a 99 Cents Only Store.

If I’ve learned anything from my years of shopping and reporting on shopping, it’s that Costco is no dollar store. Let me offer up my beloved Aunt Hope as evidence. She’s a boomer, married, college educated and reasonably well off, having put two kids through college and paid off her home in the nice Los Angeles neighborhood of Westwood. Hope, whose patronage of Costco dates back a decade, can choose from plenty of stores to shop in, but she chooses Costco and chooses it often, visiting about once a week to buy everything from socks to soap. She feels she can trust that Costco provides value, she can get all of her shopping done in a single trip, she frequently discovers new stuff and, of course, there are samples and plenty of them.

It didn’t take much prodding for Hope to agree to come with me to Costco in Torrance, Calif., on a recent Monday. I’d read that Costco was testing out new beauty areas under the moniker Beauty’s Most Wanted Studio at two Southern California locations and I was eager to check it out. We headed to Torrance, relatively close to Palos Verdes, a beautiful and affluent coastal city.

We arrived at midday. To my surprise, the parking lot was very congested. “It’s always that way,” muttered Hope. We finally found a space at the edge of the lot. Walking into the store, we smelled Costco’s signature hot dogs—it charges $1.50 for a hot dog and a soda—and Hope told me a story about her friends getting together for an event where those hot dogs were the food of choice. At the entrance to the store, Hope flashed her membership card and we sauntered in, immediately encountering a row of spotlighted merchandise that included a LaLicious product for $19.99 stamped with the slogan “Beauty’s Most Wanted.” Hope hadn’t seen the product before. That definitely piqued my interest about the potential beauty discoveries in the store, and Hope suggested we stroll over to the beauty aisle to find more.

The new beauty displays weren’t in the beauty aisle. Instead, there was Costco’s customary shelving—utilitarian orange towers stacked with beauty products in so much packaging I swore I heard environmentalists the world over weeping. For the most part, the products were from recognizable brands at good prices. Skinceuticals CE Ferulic was $109.99. Later on the Web, I saw the same item priced from $118 to $153. Other beauty brands represented in the aisle were Shiseido, Strivectin, Neutrogena, Frédéric Fekkai, Dove, Olay and RoC. There didn’t seem to be rhyme or reason to the brands available, the beauty categories covered or the organization of the products. There were no staff members assisting customers.

In the midst of the recognizable brands, there were products from manicurist Jenna Hipp and makeup artist Pati Dubroff that I knew were created by Hatch Beauty especially for Costco. I had thought those were only going to be in the new beauty displays, but, seeing them in the beauty aisle and not locating the displays, I started to have the nagging feeling that perhaps the displays were gone or I’d gone to the wrong Costco. I decided to head to the apparel area to look for a shirt or sweater for my boyfriend. When I got there, I noticed the new beauty displays nearby immediately. They were shiny black and well lit, with large images of lovely, makeup-adorned faces. If the displays were at Sephora, I wouldn’t have done a double take.

Two women dressed in black manned the displays, which occupied about 500 to 600 square feet. The women were ready to assist anyone who asked. There was a table and mirrors for demonstration and application, products on hand to test, and text and video screens communicating brand messages and product tips. I asked one of the sales associates how long she’d been there, and she said three months. As I glanced around, she pointed out that an eye shadow palette from Pati Dubroff, $17.99, would give me a wide array of eye looks at an affordable price compared to Urban Decay’s Naked Palette, which costs around $50. There were also items from Jenna Hipp, Orlando Pita, Jessica Wu, Shiseido, Serge Normant and Strivectin. As is Costco’s wont, the products were predominantly encased in substantial packaging that sometimes contained multiple items. The Essential Nail & Hand Cream from Jenna Hipp, for instance, had the cream in three varieties.

I quizzed the sales associate on the reception the new beauty area was getting. She said customers are curious, but acknowledged that Costco is a warehouse club and shoppers aren’t accustomed to buying beauty products here. The fact that most shoppers aren’t familiar with many of the brands probably doesn’t help and she opined it would take a bit of education to really get the new section humming. Knowing Costco shoppers as she does, Hope speculated many shoppers would be willing to take a chance on the beauty products. She contended they have faith in what Costco brings them, are thrilled to encounter new offerings, and aren’t taking a big risk because they aren’t shelling out too much for the items.

As a journalist on the retail and beauty beats, there are few nuts harder to crack than close-to-the-vest Costco. However, through informal discussions with brands and product developers, I have gleaned a little about the retailer’s plans for beauty. Apparently, Costco is going to open more Beauty’s Most Wanted Studios, with the next locale slated for Columbus, Ohio. The studios are being tested in different areas within the stores to determine where they are most productive. And productive they seem to be: The staff of the studios, which is made up of trained makeup artists, are doing numerous applications and demonstrations daily, and I’m told the products are selling briskly.

I certainly did my part. In total, I spent about $230, on items including products from Jenna Hipp and Pati Dubroff, two sweaters, some bras, an array of holiday merchandise and, in proper Costco fashion, 16 bars of Dove soap and a 30-pack of Charmin toilet paper. In all, not a bad haul—and unlike Galifianakis, one that ensures I’ll probably be back sooner than in seven years time.