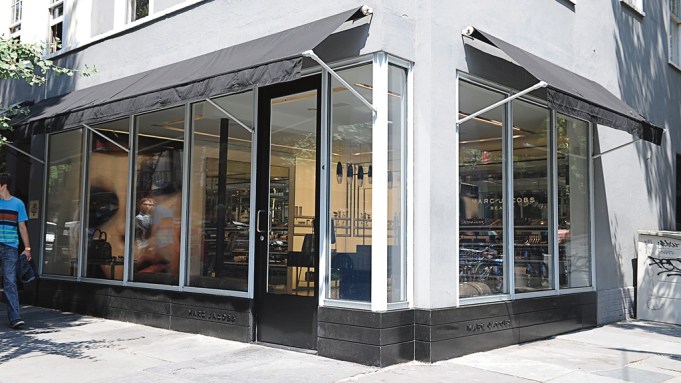 A recent trip to the new Marc Jacobs Beauty store at 385 Bleecker Street was not my first. I had been there many times when it was the accessories store. In fact, I am more familiar with the enclave of Marc Jacobs stores in the West Village and its ongoing shuffle than the average shopper. Full disclosure: During my eight years in the fashion features department at WWD, I have covered Marc Jacobs extensively, including one assignment that required me to shadow the employees at the Marc by Marc Jacobs store for a day. Attending his fashion shows are a highlight of my job, going to in-person previews of his collections, a privilege.

In other words, fashion-wise I’m a fan, a true believer both professionally and personally. By that measure it stands to reason that I would feel a similar attraction to his beauty line. Except that I know virtually nothing about makeup. My regimen is as minimal as it is amateur, for the most part limited to three cream-based Nars products that I smear around and hope for the best. That, by the way, has no bearing on my capacity for buying beauty products, as I am woefully defenseless against the high-pressure art of department-store beauty sales. Unless I absolutely hate a product, my rate of purchase is directly proportional to the amount that touches my skin. That is the story of how I went to Barneys to return a pair of pants from The Row that were on sale and I still couldn’t afford, stopped on the beauty floor on my way out and left with three Chanel products that totaled as much as the pants.

I should say that I’m a sucker for a name-brand image, nice packaging and the variation on the Sackers Gothic font particular to the MJ logo, so this shopping excursion boded well for Mr. Jacobs. The Marc Jacobs beauty store was pristine, glamorous in a minimal way with sleek leather benches vaguely shaped like lipsticks positioned along the walls, a slick and clutter-free black counter in the center. A few shelves around the store were sparely merchandised with fragrances, handbags, scarves and sunglasses, none of which looked to be a free-gift-with-purchase. The collection is installed on the mirrored back wall, arranged with linear precision and expertly over-lit so the colors glow like gems. Between the square streamlined bottle shape and the witty names (Snap!), the nail polish looked so good I briefly considered painting my own nails for once in my life.

On a Tuesday around 5 p.m. I had the store to myself aside from two sales associates, a man and a woman. They gave me a minute to peruse before the woman gently asked if I had any questions. I told her that I had read about the new beauty line and was curious, but I prefer a natural look. She said she shared my less-is-more philosophy and she was not kidding. This was a woman so fair, her complexion made Cate Blanchett look Latin, and her makeup was understated to the point of invisible. Her manner was equally mild, but attentive and informed. Whatever item held my gaze she described in depth.

I started with what I knew: Dark undereye circles. My relationship with them dates back to 1993 when my seventh-grade teacher thought I had a black eye and pulled me aside to ask if everything was okay at home. The sales associate explained that most of the line is gel-based, and the concealer comes in a pen with a metal tip that is 10 degrees “cooler”—than room temp, I’m assuming—for depuffing purposes. She directed me toward two shades: Bright Idea and Rendezvous, one with pink undertones, one with yellow. We agreed that both looked nearly identical when applied, so I went with the pink, and was assured that I could return it within two weeks for an exchange or store credit. I moved on to foundation, emphasizing my sensitive skin and wariness toward new items. Again, I was informed that the Marc Jacobs foundation is gel- based, which is supposed to be great for “building” and is lightweight but superhydrating, apparently even more so than the Nars formula that my salesperson was previously loyal to. She put it on the back of my hand but I actually found the consistency drying.

Moving on: The eye palettes looked pretty, but the seven-shade palettes were a little overwhelming, which the saleswoman seemed to intuit. She steered me toward the three-shade set of The Ingenue, a series of bronzey browns suitable for everyday use. When I mentioned that I had read about how revolutionary the eyeliners were supposed to be, she produced the Magic Marc’er Precision Pen in Blacquer, a liquid liner, which, frankly, terrifies me. The road from perfect liquid liner to disaster is a short one.

I ended up buying a powder blush (self-applied—this was a very DIY process) called Shameless, the palest shade of pink the line offers. The sales associate didn’t talk me into or out of it, but said that it would probably have a “luminizing effect,” which appeals to my desire to look luminous and never matte. That prompted a tip: “I probably shouldn’t say this,” she said before telling me about a new “game-changer” Chanel rosé product.

Upon Googling, I’ve narrowed it down to the Le Blanc Light Revealing Brightening Makeup Base SPF 30, which does indeed look game-changing. Maybe promoting another company’s product is against the rules, but I sincerely appreciated the recommendation and it spiked her credibility in my eyes.

At the end of the day, I left with the concealer, the blush, my associate’s card and a tinge of longing for the traditional department store beauty-counter tactics wherein a casual browse ends in an unsolicited makeover. How else will I learn to apply the Marc’er?

I wondered if Sephora, which developed the line and has the exclusive on Marc Jacobs beauty outside of Marc Jacobs’ own stores, would provide such an experience. My thoughts on Sephora are this: The Union Square store is located two blocks from my home, it tends to stock almost everything and the sales people seem to be required to wear all of the inventory at once. I went at 10 a.m. on a Thursday and located the Marc Jacobs counter, which surprisingly did not command the splashy real estate I was expecting, although it clearly had seen its share of traffic. The eye palettes were gouged, the lip glosses sticky and a few of the displays were empty entirely. There also seemed to be more marketing imagery, such as cheeky tag lines like “Boy tested. Girl approved.,” than I remembered from the Marc store.

When approached by a sales person, whose taste in makeup—hot-pink lip, fully lined eye and allover foundation—could not have been more the opposite of the deliberately washed-out look of my MJ staffer— she told me that the line had been available for two weeks and had already driven $1 million in sales. Her own makeup style was not an indicator of her sales approach, which was more informational than aggressive. Have in-store makeovers gone out of style? She had tried two products from the line, the mascara and the lip gloss in Boom Boom and went on to tell me that the collection is inspired by famous women. “Everything has a story,” she said.

I went back to the foundation, at which point she educated me on the line’s gel angle again, as well as the beauty of being “buildable.” As I learned, that means you can reapply it over and over again throughout the day without looking cakey. With permission, she dabbed a little Bisque Light on my cheek, decided it was my tone and offered to get me a sample. When she came back, I expressed my curiosity and fear of the liquid liner, which she demo’d on her hand, drawing out three lines in different widths to show that it was user-friendly. She didn’t push, but told me that the liquid liner and the mascara had made it to Sephora’s bestsellers wall, “so they have to be rated four stars or higher by our customers.”

My liquid-liner aversion still stands, but I’m coming around on the gel.