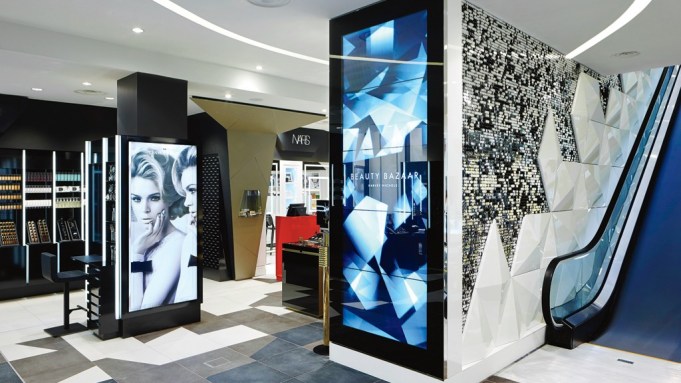 Liverpool is a city on the northwest coast of England, famed for its port, its distinctive “scouse” accents, the Beatles and its women, who have a predilection for makeup and like to wear a lot of it.

Back in November, when I went to the opening of the Harvey Nichols Beauty Bazaar in the upmarket Liverpool One shopping district, I was genuinely impressed with the commitment to pigment—in eye shadow, blush, bronzer, nails and lipstick—that these ladies had on display. And it was a daytime launch.

According to Daniela Rinaldi, group concessions and beauty director of Harvey Nichols, Liverpool is where English women have the highest spend on cosmetics outside of London. They spend four times the national average on grooming, be it hair, tanning, nails, brows, makeup, lashes or various other treatments. Liverpool lasses are polished and they work hard to be so.

It may seem like a long way from my home in London to go for a lipstick—just over two hours on the train—but Beauty Bazaar was my destination when I set out on a bitterly cold Thursday. When it comes to lipstick, I’m usually loyal to Dolce & Gabbana’s fiery Venere, MAC’s Morange or any shade of candy pink, but having admired MAC’s Ruby Woo on the pouts of many a fashion insider, I wanted to give it a go myself. Unfortunately, Ruby Woo was sold out at every London MAC counter that I visited—including its own stores. Clearly, I needed to travel further afield.

Beauty Bazaar was very quiet when I arrived at 2:30, just after the lunchtime rush. Sales associates outnumbered customers. I was immediately drawn to the Tom Ford counter and its vast array of scents. Champaca Absolute caught my eye and I asked the associate if it was a single-note fragrance. She assured me that it wasn’t, and grabbed a fistful of hand-written cards on which she had listed the notes in all of Ford’s fragrances like a student studying for an exam. Champaca Absolute also contains night-blooming orchid, sandalwood, vanilla bean and jasmine. She clearly knew her stuff.

My Chanel foundation was running out so I also inquired about the coverage of Mr. Ford’s formulations. The associate recommended Traceless Foundation Stick in Sable. I headed to the dedicated make-over area behind the counter, where things looked a little messy, with just-unpacked uniforms, cardboard boxes, more product note cards and the sales assistants’ blazers draped over another chair. But no matter: The attention showered on me by the Ford sales associate, teamed with her obvious love of the products and her job, more than made up for the slight disarray.

And—swoon here—she introduced me to Scarlet Rouge, a creamy lipstick that will give Venere a run for its money in my affections. The shade is pure Hollywood glamour. The sales associate also applied Shade & Illuminate to my cheeks, instantly giving me cheekbones sharp enough to cut cheese. I didn’t know I needed that product in my life until that moment. As for the aforementioned Traceless Foundation Stick, the method of application (buffing in with a brush) was a step beyond my patience threshold.

As much as I liked the other products, though, I didn’t purchase anything from Tom Ford. I was, after all, a woman with a mission. Even after spending more than 40 minutes with me, the sales assistant wasn’t annoyed, and happily wrote down all of the products that she used and presented it to me in a heavy stock envelope, which I still have because I can’t stop thinking about Scarlet Rouge.

But down to business and Ruby Woo. I headed to MAC, where the reception was less welcoming. I began inspecting lipsticks. When I asked if they had Ruby Woo, it was duly located and an application offered. Because of the very matte texture of the shade, the MAC rep had feathered it on to my lips with a disposable lip brush, not quite reaching the edges. Rather than the impactful vintage pout that I had imagined, I looked like a vampire. I took matters into my own hands, disinfected the bullet and applied it straight from the tube. It’s much drier than I expected, though, and I needed something, anything—a lip pencil, perhaps?—to smooth the edges. No help was offered, however, and I left MAC without Ruby Woo in hand.

I had only scratched the surface of Beauty Bazaar’s offerings. Upstairs, the second floor is given over to open treatment services, including Mark Woolley’s Electric Hair Lounge, a Blink Brow Bar, pedicure “cabanas” with iPads and earphones, a Champagne nail bar, a Blinkfairy lash bar and the glass-fronted Wow bar for all-day cocktails, wine and snacks. The third floor, reached via a dedicated lift, is where the more personal treatments take place. Spray tans are performed by James Read’s team at The Studio, there’s waxing and HD Brows at Strip, and Karidas Medispa offers more specialized treatments, including injectables, laser hair removal and body-contouring services.

The second floor also contains an outpost of Beauty Mart, which stocks more than 100 brands in a tiny space of about 130 square feet. The area was being reorganized on the day I visited, and the sales associate quickly apologized for the disarray, offering help and a free sample of DHC cleansing oil. The staff were very clued-up on the product offering and answered all of my questions with enthusiasm. I bought an abrasive Japanese bath towel for in-shower exfoliation for three pounds (about $4.80). The associates next door at Beyond Beauty, which stocks brands like Eve Lom, Rodial, Ren and Strivectin, were just as knowledgeable and introduced me to Perricone MD’s No Foundation Foundation, which adjusts to your skin tone and also made it on to my “maybe” list.

Back on the ground floor, I saw Laura Mercier, Jo Malone, Estée Lauder, Lancôme, Bliss, Nars and Chanel, a veritable beauty heaven where the only complaint I had was a dearth of staff (a problem I also noted in the niche fragrance section). With a design inspired by diamond facets, Beauty Bazaar is laid out so that you have to walk past at least half a dozen brands to reach the escalators. With its multifloor layout, it feels more like a boutique than a department store beauty hall, and because of its dedicated premise, it doesn’t yet have the footfall that department stores do—but that’s a good thing.

There’s a real sense of discovery here, with so many products to sniff, sample and apply and so many services on offer. Having a café makes it the kind of place where you can go in the morning and emerge six hours later looking like a new person—in fact, Beauty Bazaar offers packages for just such a thing.
And, while service and staffing levels are still being ironed out, there’s really only one thing wrong with the store—right now, there’s only one Beauty Bazaar and it’s not convenient to me.