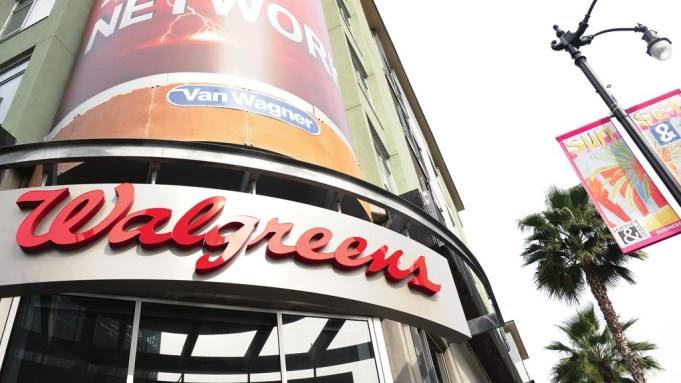 I have been to the Walgreens on the corner of Sunset Boulevard and Vine Street in Hollywood twice. Once to behave like a “normal” shopper to assess the store for this story and another time for its opening party last December, where an unusual cadre of celebrities gathered to partake of the sushi that was being passed around to demonstrate just how different this Walgreens is from ordinary drugstores. But I have been to the site of the Walgreens on many, many occasions. Before it was a Walgreens, it was a Borders, and for a very brief period, I lived in the Sunset + Vine apartments above that Borders. If I’m being candid, I was the least-cool resident of the complex. I lasted less than a year before jumping ship to a leafy neighborhood in family-friendly Culver City.

When I initially thought about Walgreens with a Look Boutique, its upscale beauty concept, I figured it wouldn’t fit in either. The only other Look Boutique I had visited in California was at a store in Los Gatos, Calif., a tony Silicon Valley community filled with those who have discretionary income to burn on the likes of La Roche-Posay and Kinerase. While Hollywood isn’t for paupers—rents at Sunset + Vine rise above $2,000 a month—its household incomes don’t compare to the $210,000-plus in Los Gatos.

Could the Look Boutique make La Roche-Posay customers out of shoppers with Pond’s-size budgets? In an attempt to answer that question, I enlisted a friend to come with me to the Walgreens on Sunset and Vine so I’d have a partner in crime with whom to evaluate the store. My friend is 35, and doing pretty well for herself in a finance job. She’s not afraid of spending a pretty penny for something that really delights her, but she isn’t lavish. She had spent a year in England during college and had heard the new Walgreens had Boots No7, a brand she’d discovered there. (Walgreens took a stake in Alliance Boots last year, and Boots No7 made its Walgreens debut at the store.) She was curious about whether the store resembled Boots, and was also on the hunt for an orangey-red lipstick.

I prepared for our trip by downloading Walgreens’ app onto my iPhone. I was hoping I’d score some deals, so I scoured the available mobile coupons and signed up for deal-alert texts. I didn’t receive any texts in advance, but I had access to a mobile coupon for Yes To products. If there were something I was interested in from the Yes To line, I’d definitely try that mobile coupon at the Walgreens’ cash register. We arrived at Walgreens at about 3 p.m. I immediately noticed the patio outside with free Wi-Fi, where people sat working on laptops. It was almost as if I’d arrived at a Starbucks. Walking into the store was equally surprising. An employee greeted us at the door. In front was the bright and clean Look Boutique and to the right was a massive prepared-food area with everything from sushi to octopus salad. “This kind of feels like a fancy airport place,” my friend said, comparing it to duty-free.

Boots No7 occupies prime real estate at the entrance to the Look Boutique. Its black shelving contrasts with the largely white units elsewhere. It also has a cash wrap right next to it, which wasn’t staffed when we got there. We dove into the huge selection—about 270 products in approximately 30 feet of fixtures. I remembered a cream eye shadow I had bought back in 2007. I loved that shadow and had squeezed the tube to its bitter end. Despite the enormity of the selection here, I didn’t see it. I did find, however, Perfect Smoothing Eye Shadow in the same soft purple hue.

In my opinion, the Look Boutique’s greatest assets are its testers. Customers can test virtually every product. I shaded one eye with the Perfect Smoothing Eye Shadow and assessed myself. Sold! That was the beginning of our fun with testers. My friend set out to search for the orangey-red lipstick she’d spotted in an advertisement—the perfect moment for the on-staff beauty adviser to offer assistance. Unfamiliar with the makeup brands at the Look Boutique, which included Vera Moore, ’Tini Beauty, TheBalm, Pür Minerals and StudioMakeup, my friend jumped at the opportunity.

The brand-agnostic adviser plucked lipsticks from each line and tested them on her hand. Narrowing down the field, my friend brushed her lips with various choices. I thought a Vera Moore hit the mark, but my friend wasn’t satisfied—too orange. We abandoned the quest and browsed the rest of the assortment. I sprayed hair spray from B. The Product, which came out in a forceful stream. That caught my attention in a good way: The hair spray wasn’t going to get lost in the atmosphere. My friend scanned more brands she wasn’t previously aware of, Talika, SweetSpot Labs and GlamGlow among them. “How many people are going to come in here and buy this?” she wondered. “It’s hard enough in a beauty store.”

My friend zeroed in on acne-spot treatments, mulling a Vera Moore item when the sales assistant directed us to La Roche-Posay. As an aesthetician, she said she preferred skin-care treatments from skin- care brands. The extensive range of La Roche-Posay products was a little overwhelming. There were tons of items for sensitive skin, acne-prone skin, aging skin and so on. Where we should focus wasn’t clear. The dviser suggested Effaclar Duo Acne Treatment. It seemed like a good product—we tested it, of course— but when we flipped over a white metal element that concealed the prices, the price was over $30(!).

I flipped over another of those metal elements on a different row of La Roche-Posay products: The majority were from $42.50 to $55. It became obvious why Walgreens covered the prices. They weren’t typical of drugstores. Perhaps sensing our sticker shock, the sales assistant told us that salicylic acid treatments were available in aisle three in the standard personal-care merchandise section. She wasn’t dismissive of our frugality in the least, and I was happy she didn’t give us a hard sell.

The regular beauty aisles were more crowded and had two beauty advisers. But after the Look Boutique, they were sort of uninspiring. With no testers, my friend avoided the lipsticks because she had no desire to buy one that might not be the right shade. I explored the Yes To selection, putting the Eye Makeup Remover Pads on my to-get list.

We headed to the Boots No7 shelves again prior to finalizing our purchases, where a beauty adviser was now on duty. She handed us samples of Protect & Perfect Intense Beauty Serum, which she said is clinically tested to reduce wrinkles. She didn’t have to do too much to persuade me. Out of all the Look Boutique brands, No7 was the most attractive to me. It wasn’t crazy expensive and, even though I hadn’t used it in forever, it is a trusted brand outside the U.S. and that gave me confidence.

There was a minor hiccup when we checked out. I hadn’t read the Yes To mobile coupon carefully enough, and it was for shampoo and conditioner. I wasn’t able to get a discount on the Eye Makeup Remover Pads, but I bought them regardless. In total, my friend and I spent roughly $130 on nine items. The next day, I received a deal alert via text to get $1 off Sally Hansen Salon Effects Real Nail Polish Strips. If I had gotten it when I was in the store, I would definitely have bought them. But based on this experience, I’ll be back. I guess you can go home again.

Considered Walgreen’s flagship in Los Angeles and located in the heart of Hollywood, this is store number 8,000 for the retailer. The site is full of history—it once housed the legendary Schwab’s Pharmacy, where Lana Turner was discovered. Measuring 23,500 square feet, the store features unusual drugstore amenities like a sushi bar, smoothie station and more than 700 fine wines. Beauty is well represented, too: The Look Boutique occupies about 1,700 square feet, including prime space for Boots No7.