With its first door in Germany and the largest European store to date, the company is playing it big in Berlin. 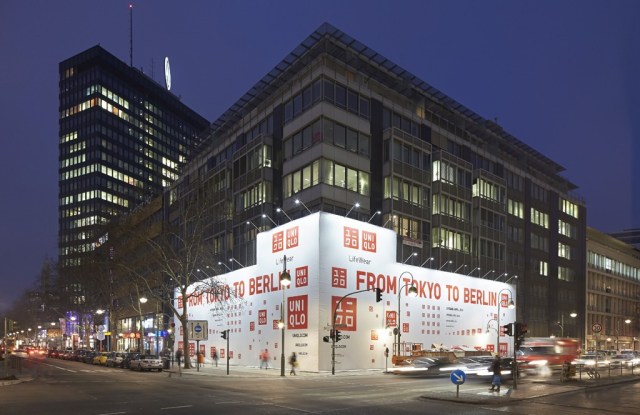 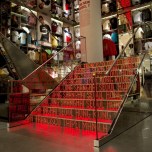 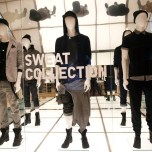 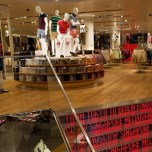 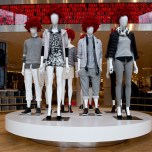 BERLIN — With its first door in Germany and the largest European store to date, Uniqlo is playing it big in Berlin.

Fast Retailing Co. Ltd.’s Uniqlo chain took over the corner of Tauentzien and Nurembergerstrasse on the city’s well-trafficked west side for its three-floor, 29,000-square-foot Berlin flagship. Set to open at noon on Friday, the store houses the entire Uniqlo assortment for men, women and children. Indeed, the kids’ department in Berlin is the chain’s most extensive in Europe.

The two-story glass facade and interior features the chain’s signature store design elements, including rotating mannequins in the windows; LED city name displays, in this instance on the stairs leading to the men’s and children’s department in the basement and upper women’s floor, and assorted high-tech installations. There are also a few Berlin specialties, like chairs and other items by Bauhaus luminaries Mies Van Der Rohe, Walter Gropius and Marcel Breuer. The building’s dimensions also made possible Uniqlo’s tallest T-shirt wall globally, measuring 42-and-a-half-feet high.

In the run-up to the opening, Uniqlo embarked on an active advertising campaign on the streets and in the subways, as well as magazines, featuring six faces of Berlin as well as core products. The people campaign featured actor and producer Daniel Brühl, model Eva Padberg, DJ and producer Nina Kraviz, restaurateur Roland Mary, actor Samuel Schneider and actress and blogger Nilam M. Farooq (aka Daaruum) as ambassadors wearing Uniqlo’s cashmere pullovers, stretch jeans, ultralight down jackets and linen shirts. Earlier in the year, coinciding with Berlin Fashion Week in January, Uniqlo staged a series of pop-up stores in locations around town.

To mark the opening, the Berlin store is offering a preview of fall’s men’s and women’s cashmere sweater range at a 10 euro, or $13 at current exchange, discount till April 19, as well as a Berlin limited edition of J Brand women’s jeans in two washes of midblue and black. Uniqlo also put aside some stock of the almost sold-out Inès de la Fressange collection especially for the Berliners, to make sure all facets of Uniqlo’s LifeWear story could be experienced in this German debut.

The decision to enter Germany at the present time had to do with finding “the right location and the right team. The European team exists only two years,” he pointed out. Germany is a more complicated market than France and the U.K., where tourism and buying power is centered in one city. Germany is decentralized, requiring more city locations, and lease contracts also tend to be much longer. Comparing Uniqlo’s current European playing fields, he said the U.K. is a very price-aggressive market, where competition takes place on the basis of price discounts, though Uniqlo’s stock management means “you won’t see many price cuts in our windows.”

France is about signature product, “about using Uniqlo as a tool box in one’s wardrobe in a casual way. Whereas Russia is about colors. Color has a higher relevance than in the West. I’ve never seen so much red as on the streets there. In Germany, we’ll have other lessons,” he added.