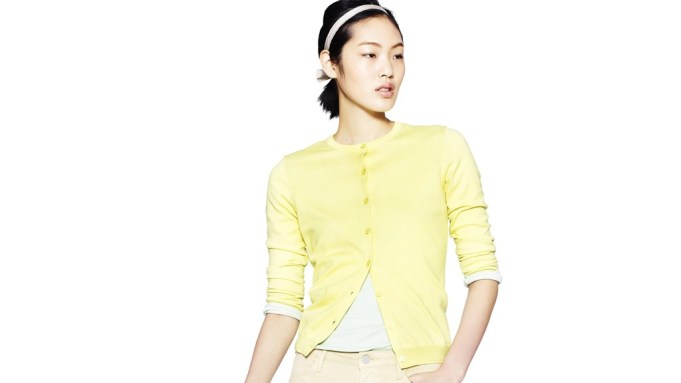 TOKYO — Uniqlo is expanding its range of products made from U.S.-grown Supima cotton for the spring season onward, hoping to woo international customers with high-quality clothing at an affordable price.

Fast Retailing’s Uniqlo is rolling out about 150 items, including T-shirts, hoodies, knitwear, innerwear and loungewear, with some products offering UV protection. Retail prices range from about 790 yen to 1,990 yen, or $7.71 to $19.42 at current exchange. The color palette features hues like lilac, pink and pistachio green. Uniqlo declined to provide a sales forecast for the new range.

The Japanese brand has a long relationship with Supima and has used the extra-long staple fiber, primarily grown in California, for more than 10 years. But it is now making about 30 percent more products than it did a year ago and ramping up marketing efforts. It will similarly launch new Supima products for fall and future seasons.

Jesse W. Curlee, president of the Supima Association of America, said Uniqlo is “probably” the cotton growers’ organization’s biggest customer. He declined to specify by how much, but said it was a “big percentage” for one brand.

Curlee stressed that the organization of cotton growers often turns down requests from retailers and brands to use the Supima name to sell their products. He said he was reluctant to grant Uniqlo the right to do so, but was convinced after he got to know the company and its base of young, “up-and-coming” consumers shopping for luxury products.

“They’re the people that we want as Supima,” he said, adding that Uniqlo takes an unusual approach to its cotton sourcing by working directly with cotton farmers rather than going through third-party agents. “Our growers are very aware of the company and we’d love to see it grow more in the United States.”

The Supima products will be rolled out to Uniqlo stores around the world and target the brand’s increasingly international customer base so they will be sized accordingly, Yoshihiro Kunji, executive vice president of production at Fast Retailing, said. Speaking more broadly about Uniqlo’s clothing offering, he said the retailer is looking at ways to accommodate more body types beyond its standard Japanese sizing for smaller frames and the minimal adjustments it is already making in length for Western markets.

“In the near future, we have to achieve a more high-level, three-dimensional adjustment of [Uniqlo’s] sizing, especially for women’s, but it’s still under study,” he said.

Curlee said China’s stockpiling of cotton has created a certain sense of uneasiness in the marketplace, but demand for high-end Supima, which represents about 1 percent of the total cotton market, is robust. Supima currently commands a price of about $1.90 a pound, more than double that of regular cotton, he said.