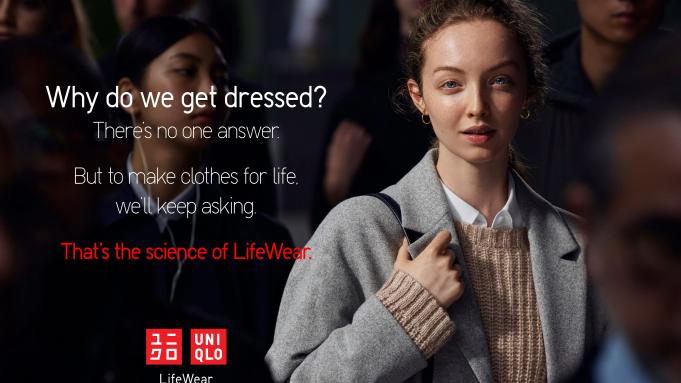 Uniqlo is launching its first worldwide advertising campaign in a bid to reach consumers at a time when its parent company, Fast Retailing Co. is feeling the pinch of a strong yen and working to reverse the fortunes of its underperforming business in the U.S.

The Japanese fast-fashion retailer said the campaign, which began Monday, features still photography and video clips that pose the question: “Why do we get dressed?” and offer up a somewhat philosophical response: “There’s no one answer. But to make clothes for life, we’ll keep asking.” Developed in tandem with New York-based advertising agency Droga5, the ads were shot in urban settings in Japan — an attempt to tap into the brand’s heritage. Uniqlo said it wants to play up the quality, style and functionality of its clothing. The new ads feature Uniqlo’s various product ranges, such as jeans, ultralight down items and Heattech insulating garments.

“By producing a global brand message from Japan, we are being authentic to our origin and who we are. We design simple, beautiful, high-quality everyday clothes that become the building blocks of your daily life. We constantly improve our LifeWear [concept] to help make your everyday life better,” said John C. Jay, president of global creative at Fast Retailing.

Fast Retailing is trying to lure new business as a strong yen erodes its profitability. Last month, Asia’s largest clothing retailer trimmed its full-year earnings forecast for the third time this year on currency woes. The company’s net profit for the nine months through May slid 46.4 percent to 71 billion yen, or $617.7 million at average exchange for the period. Meanwhile, sales grew 6.4 percent to 1.43 trillion yen, or $12.48 billion.

Tadashi Yanai, the founder, chairman, president and chief executive officer of Fast Retailing, is aiming to make his company the world’s largest apparel retailer by 2020. Over the years, Uniqlo has expanded aggressively in foreign markets, especially in Asia, but it has stumbled in the United States, where it lacks name recognition and scale. Uniqlo has just 44 stores in the U.S., compared to 467 in China.

As reported, the company is adjusting its strategy in the United States by closing some of its smaller stores and opening larger ones in key markets and focusing on e-commerce. The situation appears to be improving so far. The company said third-quarter operating losses at its underperforming Uniqlo USA operations shrank.

The company has also seen its share price come under pressure. Fast Retailing’s shares have shed just over 32 percent of their value over the past year to trade near 37,630 yen, or $371.32. They have underperformed the rest of the market. Over the same time period, the Nikkei 225 index has lost 18 percent.