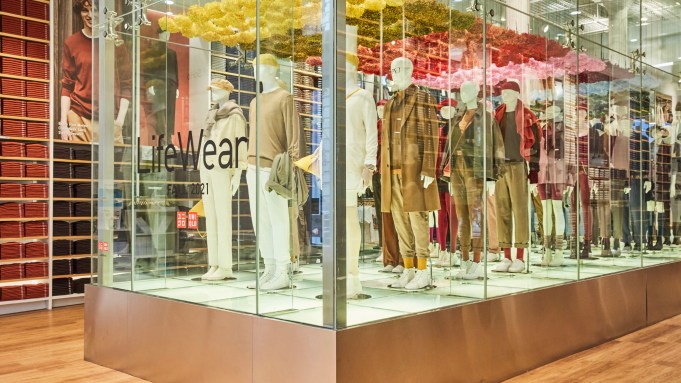 It’s been 15 years since Uniqlo landed on U.S. shores, opening its first store in America at 546 Broadway in New York’s SoHo.

To commemorate the milestone, the Japanese company, which is owned by Fast Retailing Co. Ltd., has completed a renovation of the site that speaks to its Japanese roots and its dedication to the neighborhood.

Masahiko Nakasuji, global marketing director of Uniqlo, said the store was “transformed to be a true global flagship with a local touch.”

Upon entering, customers are greeted with a massive glass tank running down the center that serves as a display mechanism and separates the main floor into men’s- and women’s-specific product. Inside the tank are displays centered around the company’s LifeWear collection, which Nakasuji described as “high-quality essentials to make everyday life more comfortable.”

For the reopening, the merchandising displays within the tank are focused on merino wool product, which is also stacked for purchase on floor-to-ceiling shelves on either side. The merchandise shown in the tank will rotate depending upon season.

Beyond that is a section that focuses on core essentials such as sweats, and 3D-created seamless knitwear complete with a video explaining the process. Nakasuji said these pieces are “timeless and not too trendy” and are available for both genders.

Monitors in the store will show the company’s latest campaign, People of SoHo, which is intended to celebrate the style and diversity of the neighborhood.

There is also a UT space dedicated to the collection of Uniqlo graphic T-shirts, which will feature new merchandise on a weekly basis. It features a floor-to-ceiling light box display as well as a UTme machine where customers can create their own T-shirts.

Nakasuji said this is the first time a customization station has been available in the SoHo store.

For the opening, Uniqlo has chosen three artists — Jean-Michel Basquiat, Andy Warhol and Keith Haring — whose work is available to be printed on the T-shirts.

The brand’s StyleHint app will be brought to life in a dedicated room on the first floor where more trend-focused merchandise will be displayed. StyleHint encourages users to upload photos to the app, which then recommends Uniqlo merchandise that is closest to those looks.

Uniqlo used its staff in the marketing images for this department since they are viewed as the ambassadors of the brand, Nakasuji said.

There’s a new jeans area complete with reworked denim pieces created by Kozaburo, and a corner dedicated to the company’s sustainability efforts.

Self-checkouts have been installed and there is a wall of imagery created in partnership with the SoHo Memory Project that depicts the neighborhood over the years. There will also be a flower wall where customers can choose fresh flowers to purchase.

A mezzanine section is focused on the company’s HeatTech product and for the opening features an assortment of fleece.

The completely redesigned second floor features women’s wear and offers a range of product, from loungewear and dresses to pants. There is also a separate children’s wear department.

Men’s wear is located on the lower level, along with the Kinokuniya book store and an area devoted to the company’s global brand ambassadors, who include tennis great Roger Federer.

Nakasuji said bestsellers in the U.S. are similar to what is popular worldwide: washable merino wool sweaters, jeans and performance fleece along with product created from the Airism cotton-blend fabric that the retailer uses in everything from T-shirts and underwear to face masks.

SoHo is one of Uniqlo’s eight stores in New York City and the surrounding area, and there are 47 in total in the U.S.

Nakasuji said while he could not provide a figure on how large a business the U.S. represents for Uniqlo, “it is a critical market for the company. We started in Asia, so we’re much bigger there, but the U.S. and other Western countries are very important to us and we have plans for expansion. We’re very committed to the U.S. market.”

In its third-quarter earnings report in July, Fast Retailing cited larger-than-expected improvements in profitability in North America and Europe, which it reports together, but said these regions were still in the red. “Uniqlo North America and Uniqlo Europe reported large revenue gains and smaller operating losses as the COVID-19 situation improved in those regions,” the company said. In the first three quarters, these regions had sales of 142.9 million yen and represented 8.4 percent of the company’s total volume.

The SoHo store, which remained open during the renovation, will have its official reopening on Thursday. As a thank you, it will offer bites from five local eateries, product giveaways and a raffle for Roger Federer gamewear.