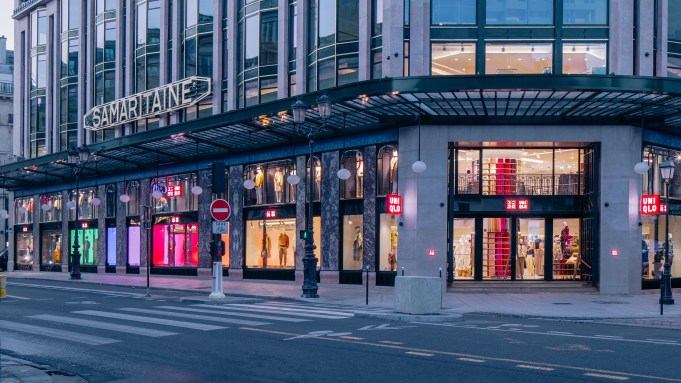 PARIS — “Welcome to Uniqlo’s new home,” said Inès de la Fressange, who was among the first guests to discover the Japanese company’s newest address, which will open to the public on Sept. 16 in the Pont-Neuf area that is also home to the city’s revived retail icon La Samaritaine.

Located in an Art Deco building at 67-73 Rue de Rivoli and dubbed “Samaritaine 3,” the Japanese company’s latest flagship brings together historic features such as its metallic structure and mosaic frieze with LED screens and, more surprisingly, plaster reproductions of sculptures from the Louvre museum — a nod to their four-year partnership signed in 2021.

With a retail area of 21,500 square feet spread over four levels, Uniqlo Rivoli will offer the full breadth of the Japanese company’s offering, from its Uniqlo U designer-focused range and de la Fressange’s ever-popular collaboration to kid’s wear and intimate apparel.

On the ground floor are the men’s and women’s core collections, along with a new-to-France area dedicated to the UT T-shirt line of artistic collaborations with artists and cultural institutions, singled out through stainless steel floors and ceiling.

Flanking the eye-catching central staircase, monumental art pieces visible from all floors and created by French and Japanese artists reinforce Uniqlo’s will to “initiate or reconnect its visitors with art,” the company said in a statement.

The first floor’s women’s offering will also be home to a 430-square-foot space to French chain Comptoir des Cotonniers, also part of Fast Retailing Co.’s portfolio, a concept trialed at the company’s Ginza store in Tokyo and now deployed in Europe for the first time.

“There is and always has been a will from the group to create synergies between its sister brands. [Uniqlo Rivoli] was a good opportunity to reiterate this collaboration between our two brands in such a beautiful and special building,” said Comptoir des Cotonnier’s director of communications Sophie Boilley. To highlight the complementary offerings, mannequins throughout the space were dressed in looks mixing the two labels.

On the topmost floor, shoppers wanting a moment of respite from the bustle of the Rivoli shopping district or needing to occupy younger family members will have a library corner complete with comfortable sofas and a selection of reading material, from picture books to art monographs.

Another focus of the Rivoli store is the spotlight on the neighborhood’s changing face, particularly its emphasis on “gentle mobility” through the use of non-petrol vehicles or pedestrian paths.

This was most evident in the men’s section in the basement level, where posters described the company’s sustainability and social outreach programs — circularity, low-consumption production and support to refugees were among the topics displayed — alongside electrical bicycles by French cycling specialists Cavale or skateboard makers Squête.

While not available for sale, they will be prominently featured in public activities scheduled in late September and October as part of the store’s activations, which also include a Japanese tea ceremony or a taiko-drums performance.

Uniqlo Rivoli is the Japanese retailer’s eighth address in Paris and 23rd on the French market, with two further openings planned this month, in the Italie2 shopping center in southeastern Paris and in the southern city of Marseille.

Uniqlo Latest to Sign On to Bangladesh Accord, Other Brands Called On to Step Up