The Uniqlo store in Milan.

MILAN — “I am a firm believer that physical stores will never cease to exist,” said Tadashi Yanai, founder and chairman of Uniqlo parent Fast Retailing Co. Ltd., on Thursday.

The unveiling of Uniqlo’s stately new 16,200-square-foot flagship here is testament to his viewpoint. The brand’s first store in Italy, and opening to the public today, the unit is “the perfect location, in terms of the combination of the building and the atmosphere, blending Italian and Japanese traditions in a perfect marriage of styles,” Yanai said in an interview. “It had to be the perfect store, with the perfect merchandise or we would never have opened it. I am very proud of it.”

While admitting that the digital channel is “a means of communication,” and aware of the impact of social media, Yanai said it can’t be “the end goal.”

He emphasized the importance of getting it right in Milan, “the fashion and design capital,” in a country that lists global brands — such as Salvatore Ferragamo and Prada, he said as examples — and given its art and culture. “Design and art are indispensable elements” in creating clothes. “We have developed the concept that everything is available for daily use,” said Yanai, encouraging customers to mix and match — also with designer brands, to create their own style.

“People’s definition of fashion is very narrow, people tend to believe the latest news, but we advocate fashion in a broader way, we have our own interpretation of fashion,” mused Yanai, waving away comparisons with fast-fashion players and trumpeting more classic, practical and enduring goods. 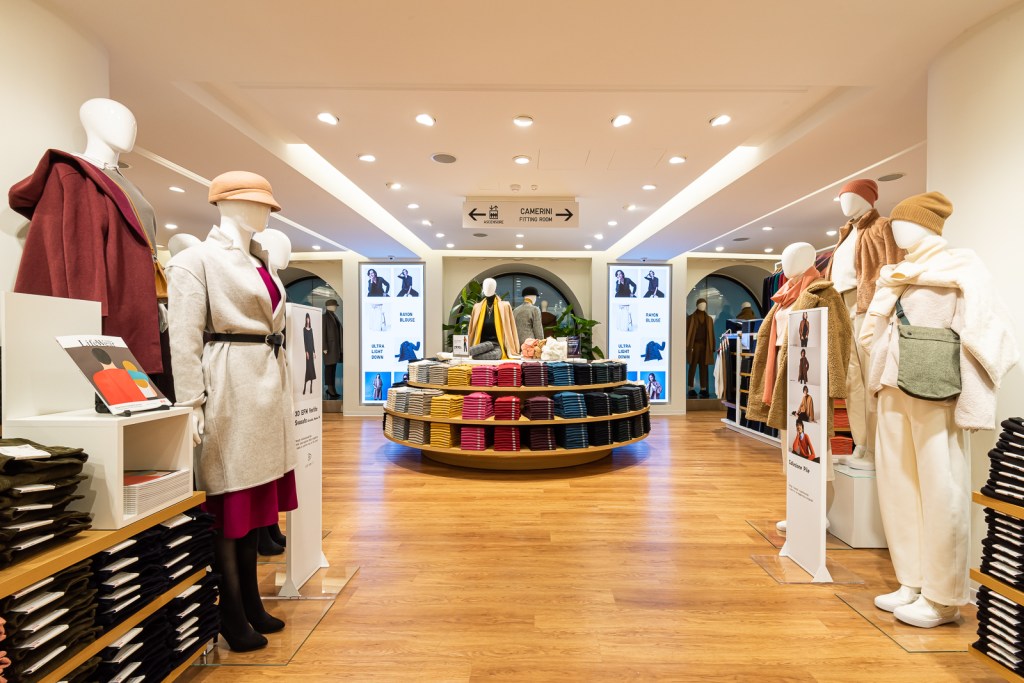 Asked if he was considering some production in Italy, Yanai said Uniqlo was still in a phase of research and that he hoped to start a bit of manufacturing here. “Italian fabrics are amazing, breathtaking, the number one in the world,” he enthused.

He was equally looking forward to possibly collaborating with Italian designers — humbly asking for suggestions — and that he may be tempted to set up a research and development center in Milan to flank the existing ones in Tokyo, Paris, Shanghai and Los Angeles. Uniqlo is currently working with the likes of Christophe Lemaire, J.W. Anderson and Inès de La Fressange, among others.

While declining to provide financial expectations for the store, Yanai, who wakes up at 5 a.m. and is at work by 6.30 a.m. but also enjoys playing golf — “with very little progress,” he said laughing — believes the Milan store will be “one of the most productive.” That said, he underscored “we don’t want to go out of stock and disappoint our customers, we want them to go home happy. It has to be a reasonable flow.” The entrepreneur, who spoke through a translator yet often broke into English, also declined to divulge the financial investment in the store, adding with a chuckle that he was “surprised it was less than expected because the original building was so beautiful in the first place.”

Despite the tourist flow in Milan, Uniqlo is focusing on the Milanese customer, and Yanai in particular said the city is “comparable to no other” in men’s wear in particular.

Asked about comments he made earlier this month about touting a possible female successor, Yanai said: “In general, I prefer women leaders, they are more attentive to details, they do a better job, they are more intuitive than men, more logical, they make decisions, are more fit to be leaders and more creative as designers. Women are better than men. They are very deep inside, and they are talented managers especially in this industry. I hope the Italian business will be driven by a woman.”

Although there is no other Italian store immediately in the pipeline, Yanai said he would “love to have 100 stores” in the country, but that would not be possible unless the locations meet his standards. “If you find a perfect spot, let me know,” he quipped. In Europe, Uniqlo is present in 10 markets with 90 stores. While the first Uniqlo store opened in Hiroshima in 1984, the first European unit opened in London’s Knightsbridge in 2001.

Located in Piazza Cordusio, a few steps away from the gothic Duomo cathedral, the new Milan store carries over three floors of men’s and women’s wear, divisions that respectively account for 45 and 50 percent of total sales, as well as the kids’ line, which makes up the remaining 5 percent. “More and more, men and women are cross-buying, there is a huge overlap,” said John C. Jay, president and global creative at Fast Retailing.

“This store opens with a strong statement, a most emotional choice of cashmere in a range of 50 colors chosen specifically for this location,” continued Jay.

Asked about Milan’s business relevance, he said “we wish we were here five years ago but timing is great, we are perfectly positioned for the zeitgeist.” The executive said Uniqlo is always looking for new locations, but that its stores are “not cookie-cutter, and this is even more apparent in Europe, influenced by local culture and architecture,” which are blended with Japan’s own tradition. “Finding the right location is more than simply creating traffic, we want to create something special,” he explained.

The product does not change dramatically depending on the country — coming up are openings in Madrid, India and Vietnam — and Jay insisted on the “timelessness and sustainability” of the clothes, which are meant to be of quality and long-lasting. “We were sustainable way before [it became a current topic] as we never made disposable clothing for marketing hype or trends; it’s not what we do,” he underscored. “Our main purpose is to help improve your life.”

Accordingly, Uniqlo stays clear of frequent and short-term drops and capsules. “We are not happy when we are out of stock,” said Jay, who also admits he is “tough” with himself in considering Uniqlo “not a global brand yet despite the fact that we are in 22 countries. We are not relevant everywhere at the same level. We are very much in transition from a Japanese brand to an international brand that happens to come from Japan.” 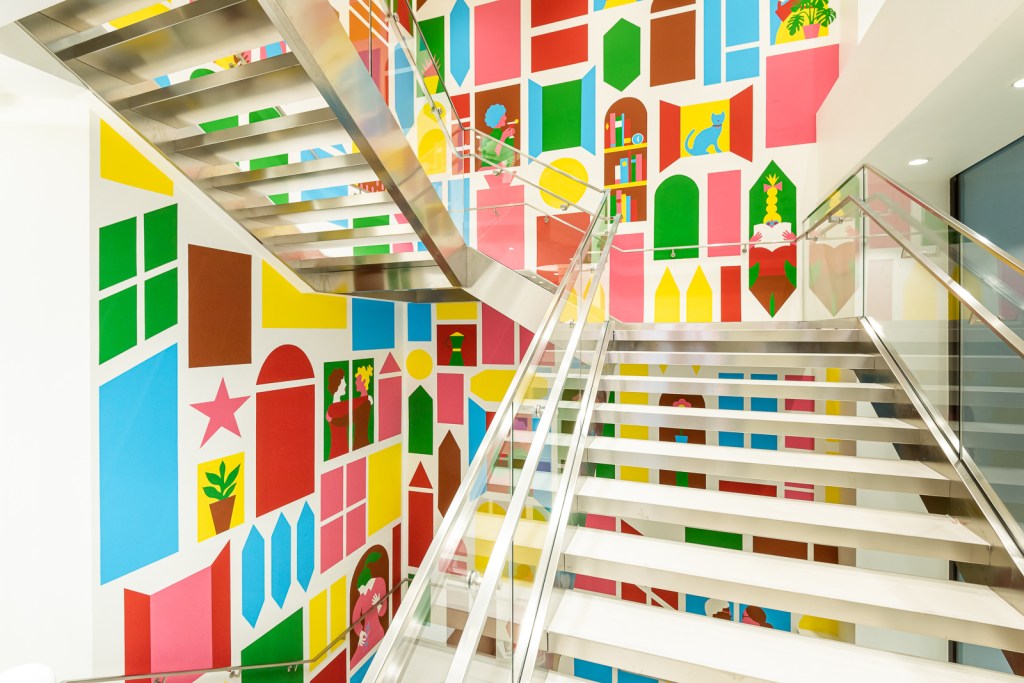 The Olimpia Zagnoli installation inside the store.  courtesy image

Uniqlo has hired 130 employees to staff the store, which is marked by the meeting of Japanese and Italian crafts. Examples include a wall made with Tuscan soil employing a Japanese technique called Tsuchikabe, and lit by cylindrical lamps made in Kyoto; the installation of Milanese artist Olimpia Zagnoli, inspired by the windows in Milan, and a collaboration with One Block Down for a wall of recycled denim swatches stitched together in a patchwork through the Japanese boro technique. The latter is called “Water is more precious than gold,” celebrating Uniqlo’s 99 percent reduction of water in denim production. In the UT graphic print collection section, the company has displayed a number of art pieces by Hokusai Katsushika, including one item that it will help restore. 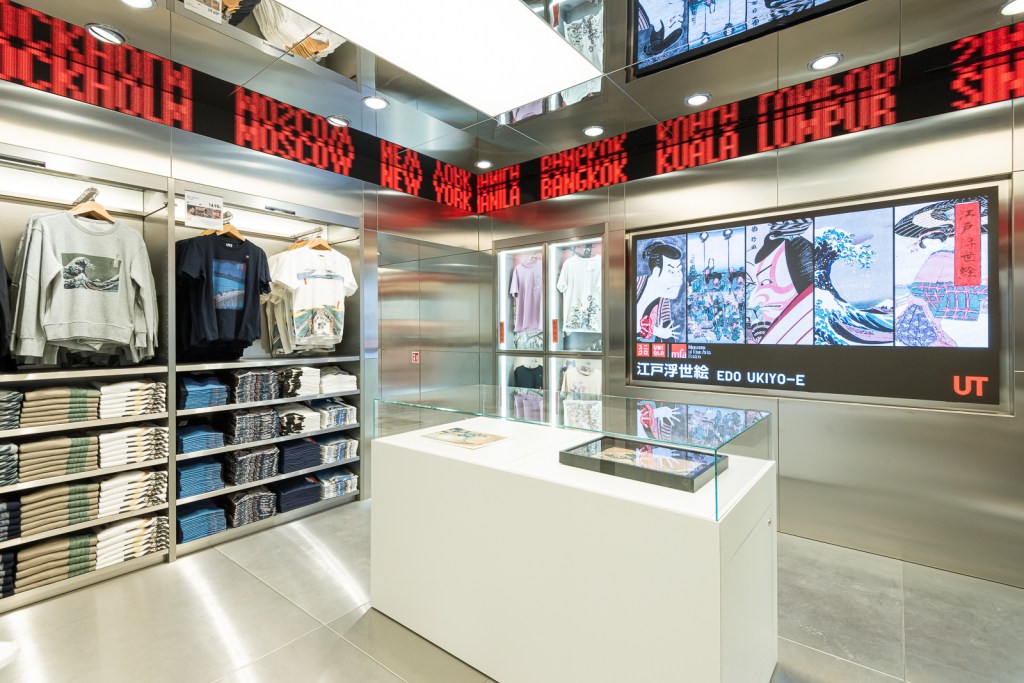 The UT section in the store.  courtesy image