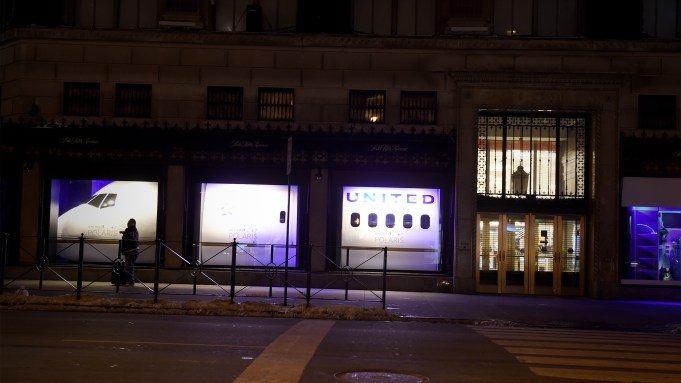 This week through Jan. 22, the luxury retailer’s Fifth Avenue windows re-create a United Airlines jet and the interiors of the airline’s Polaris Business Class. The aeronautic tableau is dressed up with Saks’ branded bedding as well as resort styles from Balenciaga, Brunello Cucinelli, Gucci, Proenza Schouler, Vetements, Marc Jacobs, Sacai, Dolce & Gabbana and Alexander Wang, all sold at the store.

The center six windows on Fifth Avenue bring viewers inside the main cabin, while the corner and side street windows depict the plane’s “nose” and “tail.”

Since last December, Saks has been providing a bedding collection for United Airlines’ “reimagined” international business class program — mimosas, showers and flat-bed reclining seats included — called United Polaris Business Class. Saks has pumped up its home offerings, but the partnership with United is more than the store and the airline saying, “come shop [or fly] with me,” according to Saks Fifth Avenue president Marc Metrick.

“We are not advertising for United at our store,” he told WWD. “We are really trying to draw stronger connections between us and our customers. Travel is very important to Saks’ customers and becoming more important.” It’s about Saks working harder to “weave” itself into the consumer lifestyle, Metrick said.

The partnership extends to the Saks Fifth Avenue Club for personal shopping, where the “club rooms” feature the bedding and other Polaris perks. In addition, Saks windows at the Chicago, Houston and Beverly Hills locations showcase the partnership.

Saks’ bedding products will be on more than 120,000 flights a year, exposing the line to more than 5.5 million “premium” passengers traveling to destinations around the world.

The partnership with United is the first of its kind for Saks. Past airline partners revolved around reward points for SaksFirst members.

According to Saks, installing the United windows required 82 hours of labor to create the concept and design with a team of 68 people involved in logistics, the creative, marketing, production and execution. The project also involved 34 hours of installation work, including eight hours of removing 8 foot by 9 foot glass panels and re-installation to fit real scale United Boeing 777 Polaris Business Class seats and a gallery bar.

The back walls of the window replicate the plane interiors and overhead compartments and there’s actual carpeting from Polaris Business Class. There are also 10 flat screens simulating the airplane in flight, mannequins wearing the resort designer fashions — and what would a premium flight experience be without flight attendants? They’re there too.

The program is part of the bigger strategic picture at Saks, Metrick said. Like United, which has elevated its business class offering, “We are also a company transforming. We want to surprise people,” he said. “We do believe our customers crave the unexpected.” Re-creating the inside of a jet airline, Metrick suggested, “is something completely unexpected.”