A new store concept, spearheaded by Gucci chief Mark Lee, will be unveiled in November, marking the evolution of the company in the decade since Tom Ford's retail vision took shape. 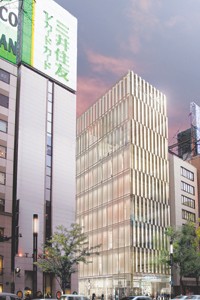 A new store concept, spearheaded by Gucci chief Mark Lee, will be unveiled in November, marking the evolution of the company in the decade since Tom Ford’s retail vision took shape.

The concept will bow at the Landmark in Hong Kong, the biggest store in the Asia-Pacific region excluding Japan, with 10,000 square feet on four floors. Gucci will also roll out two freestanding stores in Nagoya and Tokyo’s Ginza district that month. “Ginza is the biggest project. It’s a complete Gucci building and a new construction,” said Lee in his first interview on the concept.

The store will cover four floors of the eight-story glass tower and it will be the biggest Gucci unit in Japan. “The exterior was designed by James Carpenter, an architect who has built his career on glass and how it intersects with light,” said Lee.

To maintain a sense of continuity with the past, Lee asked Bill Sofield once again to develop the interior. “Bill is our consistent architect. After 10 years, it’s certainly time to evolve and to build a new environment, a new showcase that can match Frida [Giannini]’s aesthetics and collections,” said Lee. However, he emphasized that there were elements about the current format that he “found very successful and recognizable, which we wanted to hold onto with slight modifications and not discard completely,” such as the handbag presentation and the ready-to-wear displays. Lee noted that the mohair velvet fabric on the fitting room walls and the furniture will show “slightly different color and treatments.” To underscore the continuity, Sofield worked with classic Gucci materials, such as rosewood — a staple in the company’s stores in the Sixties and Seventies. The facade of Gucci’s Seventies-era New York store on Fifth Avenue, a web of brushed stainless silver and gold bronzy leather, inspired a “theme of metals running through the [new] concept,” said Lee. “Brushed silver metal with brushed golden bronze-colored metal form a subtle motif, in the way it goes metal-silver-gold-silver.”

As Ginza is a multilevel, vertical store, the executive said it offers the opportunity to create “a very special merchandising approach, and to clarify Gucci’s product strategy,” with multiple handbag and jewelry departments. On the ground floor, there will be the leather and precious-skins accessories. Higher-volume merchandise, such as GG canvas or fabric items, will be on a different floor adjacent to the silvery jewelry, while fine jewelry will be close to fine rtw.

To create what Lee describes as the “unique experience of being in a Gucci store,” he and Sofield have been working on a new program of props, down to the most minute detail: “Everything that touches the product, the handbags and shoe stands, extra accoutrements, jewelry presentation trays, the selling ceremony, how we get a handbag down from the upper shelves, the cups and glasses for the flagships where we have time to serve coffee and beverages. It’s always absolutely at the top of my mind that we are showing our most luxurious face.” A new shopping bag program and new packaging will be introduced before Christmas.

Lee estimated the project of renovating existing stores and introducing new ones will take five or six years. Gucci will start working “aggressively” on the project at the beginning of 2007. To date, the company has 211 directly owned stores around the world. By the end of the year, it plans another three stores in China, bringing the number in that country to 11.

“I think today’s concept, while very chic, striking and theatrical, had elements of being cold and hard. Our goal and biggest change is to create an even stronger sense of chic and luxury, but warmer,” said Lee. “We give a nod to consumers, to dazzle them with luxury and comfort.”