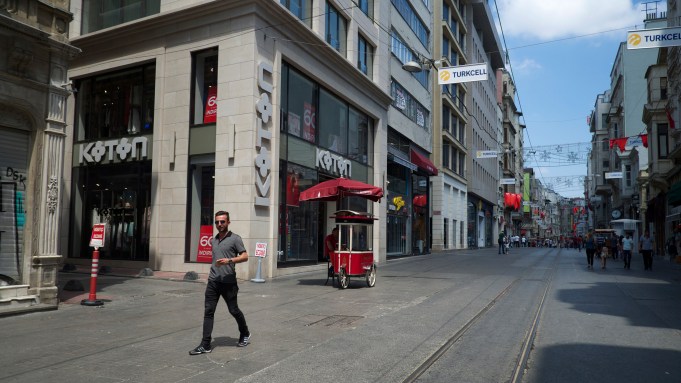 ISTANBUL — Harun Aslan is wary about predicting the future. This year’s avalanche of bad news has rendered the leather-goods shop owner superstitious.

“Last time, I said this is the worst time for Turkey. I have learned, however, to never say that because something worse can happen,” Aslan recalled. “I said it in June after the airport bombing…and then there was an Army coup.”

His store is about 300 yards from Sultanahmet Square, the site of a suicide bombing on Jan. 12 that left 10 German tourists dead and several others injured. He remembers the day clearly — the resounding explosions, the panic and how a crowd of people ran to the scene of the crime. Aslan stayed in his shop. “I didn’t want to see the bodies,” he said.

Before this year, his store typically brought in about $100,000 a month; today, his revenues are barely $3,000. But Aslan said he is better off compared to his neighbors, many of whom have started laying off employees. Next door is a shuttered restaurant.

This has been a tumultuous year so far for Turkey. The first half was marred by multiple bomb attacks in public areas frequented by both locals and tourists. The second half kicked off with a coup attempt against President Recep Tayyip Erdogan that left hundreds of people dead in the streets. Following the July 15 failed coup, Erdogan’s government has fired, detained and arrested tens of thousands of people en masse in an attempt to weed out supporters of Fethullah Gulen, a Muslim cleric living in Pennsylvania whom Erdogan has pinpointed as the mastermind behind the attempted uprising.

In less than two months, Erdogan’s sweeping purge has seen more than 81,000 people — including academics, judges and civil servants — fired, suspended, or detained while more than 100 journalists have been imprisoned. This makes Turkey the leading jailer of reporters in the world.

As its tourism sector takes a hit — recording some of the steepest declines in arrivals in 22 years — the manufacturing and retail industries are suffering as well, though in less drastic measures. But economists worry about the long-term impact of this year’s continuous bombings set up against a backdrop of growing instability in the region, along with the rhetoric and moves employed by Erdogan’s newly empowered administration.

“One of the concerns we have in Turkey is a growing centralization of power in the presidency and an erosion of checks and balances in the political system and arbitrary policymaking,” Jackson said. “That leads to a more unfavorable business environment.”

While Capital Economics had initially set Turkey’s 2016 growth at 3.8 percent, recent events have caused him to drop it to 2.5 percent — a move that could be permanent in later years.

“My concern is Turkey moving from a stage where investors are used to growth of 4 to 5 percent to one where 2 to 3 percent is normal,” Jackson said. “It’s potentially quite a big shift.”

The clearest result of the country’s troubles can be seen on the streets of Istanbul, where the usually crowded tourist spots are now empty, even during the summer’s high season. According to data from the Ministry of Culture and Tourism, August saw a 37.9 percent drop in arrivals compared to the same period last year, while the overall year has seen a decrease from 25.5 million visitors to 17.4 million — a more than 32 percent decline. Tourism revenues during the first half of the year were also slashed drastically, from $12.6 billion last year to $9 billion.

Bedir Ilhan, a manager of the popular Jennifer’s Hamam — which sells organic Turkish towels — said that he does not expect any comeback in October, the final month of high season, or for the rest of the year.

“We’ve had terrible days before but we’ve pulled through. But until that time comes, many small businesses will go bankrupt,” Ilhan predicted, adding that the days of him earning 3,000 liras a week (roughly $1,010) are long gone. Today, it is a struggle for him to reach 500 liras each week.

The jewelers at the Grand Bazaar — some of whom have been there for over 50 years — are stressed about their future as well. Shuttered stores can be seen throughout the sprawling 15th century market, which used to attract half a million visitors each day.

Sami Alkanli, the 80-year-old manager of a jewelry shop, said that as most of his customers are Turkish, he believes that the store’s current drop in sales is due to the decreasing incomes of the locals — many of whom are reliant on tourism.

“Constructing a building takes time, but demolishing it takes only a moment,” Alkanli said. “This is the situation we are in now.”

It is much more dire in the country’s coastal areas, like the popular Mediterranean resort of Antalya. Russian visitors usually make up the biggest foreign arrivals to Turkey’s beaches, but the Kremlin’s partial embargo on trade and tourism after the downing of a Russian plane near Syria’s border last November has affected these towns.

Erdogan is attempting to mend relations with Russian President Vladimir Putin, who had offered him support after the failed coup — a move that has strengthened their relationship amid the European Union’s criticisms of Erdogan’s purge and the U.S.’ refusal to extradite Fethullah Gulen. Following Erdogan’s visit to Moscow in early August, Russian tour groups are expected to start returning to Turkey.

While the apparel manufacturing sector hasn’t been hit as hard as tourism, Seref Fayat, president of the Turkish Clothing Manufacturers Association, admits that the events have shaken the confidence of foreign investors while the Russian embargo has affected the overall sector.

Despite this, Fayat expects that 2016 will see a 5 percent increase in apparel exports, reaching $18 billion.

“[L]ocal market conditions are improving and sales are reviving,” he said. “Orders [from foreign buyers] are still going on mostly, but they are worried about the developments which occurred in Turkey.”

Hikmet Tanriverdi, president of the Istanbul Textile and Ready-Made Clothing Exporters Association, also downplayed concerns. He believes that the show of unity between Erdogan and certain opposition parties after the coup attempt could propagate a more positive environment for foreign investment.

“Perhaps this is the beginning of a new phase for Turkey with the environment of solidarity and the political parties working together,” he said.

Compounding Turkey’s public image woes are the recent news reports of Syrian refugees — including children — working illegally in Turkey’s factories. Despite photographic evidence and numerous reports in the international media (including WWD), Tanriverdi rejected that this was occurring in some of the country’s factories.

“If we receive complaints about this — and we haven’t yet — then we will follow the necessary procedures,” he said, adding that with over 3 million refugees in Turkey, it would be natural for them to want to find work. “On the local level, some of them might be…working illegally, and I personally think this shouldn’t be such a big deal.”

While sectors dependent on consumer spending — such as retail and real estate — will likely suffer throughout the year, this has been happening since 2013 because of the continued political instability coupled with a slowdown in foreign direct investments, said Derya Lawrence, research analyst at Euromonitor International.

“The main impetus behind slower outlet growth is the maturation of the sector and the slowdown in investments for additional shopping malls,” Lawrence said. “Bottom line [is that] construction over the past 10 years has been ongoing and we’ve reached a point of saturation.”

He added that the recent problems have only served to devalue the Turkish lira against other major currencies, which have increased the expenses of current retailers. This has led to the closure of stores in once popular high street retail areas such as the famous Istiklal Avenue, where a suicide bombing in March left at least five dead.

“What can be said is that many consumers are increasingly switching to online retailing instead of physical retailing as a consequence of physical safety concerns,” Lawrence said.

At the end of the day, the coup attempt itself won’t be what is likely to hurt Turkey’s economy, which has been vulnerable for a while now due to the bad loans issued by banks over the last decade, said Jackson of Capital Economics. Instead, it probably will be the political actions and decisions taken by Erdogan post-July 15 that could prove to be more alarming, observers said.

“One of the concerns is the rhetoric used by politicians and sort of the seemingly more aggressive relations in foreign policies,” Jackson said, giving an example: “People were concerned about the sacking of judges following the coup — it raised questions of how independent the judiciary would be and whether investor property rights would be defamed.”

In light of recent events, this show of force only stimulates worries from the international community. “What investors want to see is a more conciliatory approach,” he said.

Aslan, the owner of the leather-goods store, is optimistic — and patient. He believes it will likely be two more years before tourism and retail recovers.

“If nothing bad happens in terms of terrorism or anything, I’m waiting until 2018,” Aslan said. “Whatever happens in this country, still people will come to see the Hagia Sophia and the Blue Mosque.”