LONDON — Urban Outfitters has planted its flag on Oxford Street.

The 15,000-square-foot store, which cost about 2.4 million pounds, or $4.3 million, opened late last month and is ready to rumble with British retail powerhouses ranging... 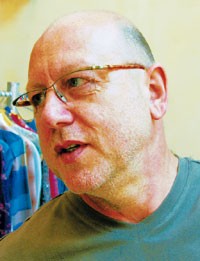 LONDON — Urban Outfitters has planted its flag on Oxford Street.

The 15,000-square-foot store, which cost about 2.4 million pounds, or $4.3 million, opened late last month and is ready to rumble with British retail powerhouses ranging from Topshop to Selfridges, all of which are nearby.

“Here, customers are not buying on price, they’re buying because we offer something different and we’re creating an experience,” said Martin Parker, managing director of Urban Outfitters U.K., during a walkthrough. “A lot of stores in London carry similar product. We’re about offering a lot of choice. We are not a mass design store.”

The store, which spans three levels, is expected to generate in excess of 10 million pounds, or $18 million, in sales during the first year, according to industry sources here. It offers a wide range of price points, with a Levi’s Red jean skirt costing 150 pounds, or $269, and an in-house label corduroy flared skirt costing 40 pounds, or $72.

All figures are converted from the pound at current exchange.

The store design is a major departure from Urban Outfitters’ raw-edged, industrial-inspired units in Covent Garden and Kensington High Street. On Oxford Street, the lights are brighter and the steel fittings are galvanized so they have a shinier finish. There’s a wide wood and glass staircase that winds its way through all three levels of the store and it’s capped by a skylight.

Even the exposed brickwork, a hallmark of Urban Outfitters stores, has been kept to a minimum and the ceiling beams and pipes have been given a coat of white paint. The floors are covered in honey-colored matte wood while the walls are butterscotch colored.

“We wanted it like a New York loft — brighter, cleaner and not quite as aggressive as the other stores,” said Parker, adding the interiors were designed by the Philadelphia-based Otto Design Group and the London-based designer Nick McMahon.

As with other Urban Outfitters units, there’s a vintage section with one-off pieces such as Fifties blue organza ballgowns and Seventies beaded pink chiffon dresses. The dressing rooms have a boudoir feel and are covered with Neisha Crosland printed wallpaper in shades of mint, raspberry and orange. On the same floor, there’s a vintage furniture section featuring Sixties leather sofas and chairs from the Danish company Wegner.

Men’s clothing is housed on the lower ground floor, where the interiors are more raw than on the other floors. The floors are concrete, the ceilings are exposed and black stereo-speaker covers and yellow electrical tape adorn the walls. Brands include John Smedley, Evisu, Diesel, Belstaff and Dockers. Customers also can buy novelty items such as Pulp Fiction Action Figures.

Parker said the customer the new Urban Outfitters has been attracting is 25 to 35 years old — older than that of its nearby competitors. “I’m actually surprised,” he said. “It’s back-to-school shopping time, and we’re not getting that customer. They’re all going to Topshop —which is fine.”

While the Oxford Street store may be Urban Outfitters’ third and final London unit — at least for the moment — there are major expansion plans for the U.K. and continental Europe. In March, the brand will open a 12,000-square-foot, two-story unit in Birmingham. Currently, Urban Outfitters’ five European stores — in London, Dublin and Glasgow — generate about 7 percent of Urban Outfitters’ store sales, which were $169.4 million in the six months ended July 31.

“How big we get will depend on how well Urban Outfitters works outside the U.K. Keep in mind that we’re not like Zara, H&M or Mango, which all carry their own brand. We carry a variety of branded merchandise — which makes expansion more complicated — and we are committed to preserving that individuality.”

Meanwhile, he said there are no immediate plans to open stores for Anthropologie, the group’s other format, in the U.K. or Europe just yet. The focus for the retail chain is currently on the U.S.