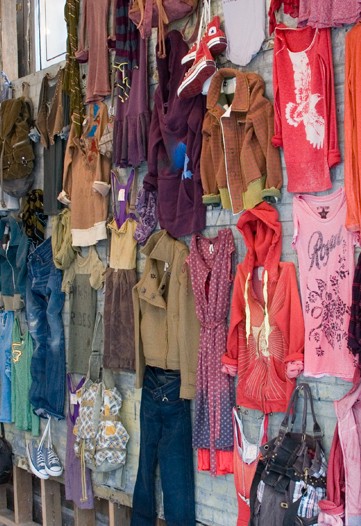 Urban Outfitters Inc. is unveiling a new retail concept called We the Free, a more casual, knit-driven spin-off to its Free People division, opening locations in Chicago and Brooklyn this month.

The Philadelphia-based company launched the vintage-inspired collection last December online and in select Free People stores, encountering such a positive response that it decided to roll out the line in its own retail space.

“When we compared those sales to the Free People mix, we knew there was an opportunity,” said Sheila Harrington, director of merchandising for Free People.

We the Free opened a store with 500 square feet of selling space on Smith Street in Brooklyn on Oct. 6 and a second, 800-square-foot location on North Milwaukee Avenue in Chicago’s Bucktown neighborhood on Oct. 17. A third store, with 680 square feet of retail space, is set to open on Cahuenga Boulevard in Hollywood at the end of November. The company declined to divulge first-year sales projections for the new units.

“We are going to be learning a lot,” said Harrington, who is eager to see how customers respond to the store’s gallery-esque selling style, in which most merchandise is hanging from the walls.

“Customers can study the wall like a gallery,” she said. “It’s like looking at artwork. It’s a more modern way of shopping.”

Harrington noted that customers are accustomed to shopping online and seeing products lined up together, and that shaped the store’s decor, which is less fixture-driven and rawer in that the clothing serves as the focal point. “The product is creating the environment,” she said.

Clothing at We the Free ranges from $68 to $108 T-shirts including classic boy crewneck styles with artwork and a soft wash to v-neck shirts with a nubby fabric and leather buttons, or graphic pieces with hand-crocheted detailing down the sides and yolk.

“I feel like it’s a different side of the Free People girl,” Harrington said, noting the line possesses more of an urban, comfort, boy sensibility.

Other signature pieces include modern twists on classic items such as a cableknit sweater with fleece insets and studs for $188 and a French terry and Polarfleece mixed bomber style print jacket with snap closures for $248.

When Free People transitioned from a junior to contemporary brand six years ago, the collection integrated its Bulldog label, which mixed more boy and feminine elements into the clothing. The brand wanted to continue to capture that customer and “explode that idea out a little further,” for We the Free, Harrington said.

In addition to We the Free pieces, the stores, catering to women in their 20s and early 30s, boast a collection of Levi’s and Wrangler jeans, studded Converse sneakers and vintage studded combat boots.

Shoppers can also use an Apple computer in the store to check their e-mail, blog or review the music played in the We the Free location.

“Our customer, she’s living very much in the modern world,” Harrington said. “We want to make her feel like it [the store] is part of her home.”