The retailer had its eye on 98 North Sixth Street in Williamsburg, Brooklyn, for seven years, according to John Hauser, chief officer of brand experience. 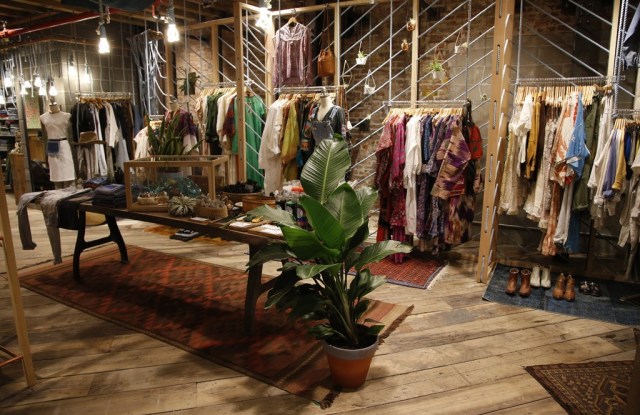 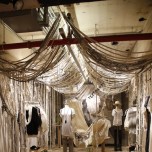 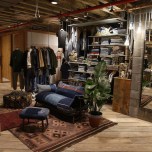 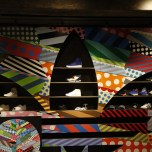 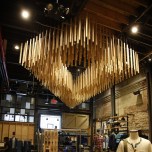 NEW YORK — Space Ninety 8 represents what Urban Outfitters creatives would do if they were less constrained by corporate guidelines and space limitations. With 37,000 square feet on four levels and a directive from chief executive officer Richard Hayne to come up with new ideas, the barriers in some ways were lifted.

“Dick Hayne has pushed us to make the brick-and-mortar experience more exciting and challenged us,” said John Hauser, chief officer of brand experience. “Seventy people from our creative team came up [to Brooklyn] for the project.”

The new concept, opening Friday, has a DIY aesthetic with plywood walls, hanging displays of rope and wood sticks and clamps and straps used for fixtures. Brick walls and ceilings are exposed and scaffolding planks were used to make the floors. Live plants and glass tables with tree trunk bases provide a natural element. “We love the space itself,” said Hauser. “It’s a 100-year-old empty warehouse. We stripped it to its core and exposed the beauty and rawness. The multiple levels posed a great challenge for us to define the spaces.”

Urban Outfitters had its eye on the space at 98 North Sixth Street in Williamsburg, Brooklyn, for seven years, according to Hauser. “Two years ago, we were going to take a portion of the building. We said, ‘We love Space 15 Twenty, [a similar concept that has operated in Los Angeles since 2008] but let’s do something bigger.’”

Hauser said the company wants shoppers to know that Urban Outfitters operates Space Ninety 8, but there’s no signage to offer a clue.

The non-traditional retail experience, as the company refers to the space, features a strong food component. The Gorbals Restaurant and Bar, operated by Ilan Hall, “Top Chef” and host of Esquire TV’s “Knife Fight,” will be in residence on the third floor. Hauser said food will also play a role in the 57,000-square-foot Urban Outfitters flagship opening in Herald Square in June, which will have a coffee shop, hair salon and eyeglass shop. Urban Outfitters’ Fifth Avenue flagship recently added a coffee bar.

Hauser declined to estimate the volume of the store, but said, “We hope it will be more productive than [a typical] Urban Outfitters store. That’s why we have the food. We said, ‘Let’s surround ourselves with like-minded people. It’s another reason to come to the store.’” In addition to Hall’s restaurant and bar, which will serve Israeli- and Scottish-inspired cuisine — bacon-wrapped matzoh balls are a signature dish — there will be a roof bar and dining area that will be an extension of The Gorbals.

On the lower level, Gallery 98 is a pop-up shop with Adidas Originals Blue’s premium apparel and footwear and custom artwork by Jason Woodside.

Space Ninety 8’s first level features a market concept with 40 local vendors, including Dusen Dusen, Salt Surf, Cold Picnic and Lila Rice. The store makes a big vintage statement in 800 square feet of space. Nearby is one of the largest shoe boutiques in the chain and Tea Party, a shop for white Ts. Next door is a rotating shop initially devoted to surf and skate.

Makeup, apothecary, jewelry and more women’s wear are on the second floor. Prices are a little higher and product exclusive to Space Ninety 8. Brands include Stone Cold Blue and Little White Lies, “boutique-type merchandise,” said Hauser. Undefeated, Stüssy and Globe from Australia are a few key lines in the men’s area.

“We’re the largest seller of vinyl records in the U.S.,” Hauser said, standing in the third floor Vinyl Shop. “All the things that people thought were dead are coming back.”

The opening of Space Ninety 8 comes at a crucial time for Urban Outfitters Inc., which has struggled in recent quarters. For the fourth quarter ended Jan. 31, comp-store sales declined 9 percent at Urban Outfitters, where net sales were down 4.2 percent to $398 million. Urban Outfitters’ weak sales are expected to continue through the second or third quarter, according to retail analysts.

“These more complex projects for us are a lot of fun,” said Hauser of the new concept, adding that it will be replicated in other cities. “There’s totally room for more. We’re looking at other opportunities now. We’re working on the next space, which will open in 2014,” he said, declining to divulge the location. “It’s in development.”