Van Noten Goes His Own Way in Paris

Dries Van Noten has fired the latest salvo across the bow of cookie-cutter luxury stores with his first shop here, located in a Left Bank neighborhood better known for flogging antiques than cashmere sweaters. 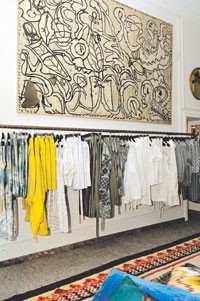 PARIS — Dries Van Noten has fired the latest salvo across the bow of cookie-cutter luxury stores with his first shop here, located in a Left Bank neighborhood better known for flogging antiques than cashmere sweaters.

Filled with antiques that it took Van Noten and his decorator, Gert Voojans, months to find, the boutique opens today on the corner of Quai Malaquais and Rue Bonaparte overlooking the Seine River — and there isn’t another clothing store in sight.

“I didn’t want it to look like anything else [I’ve done in the past],” explained Van Noten as he oversaw the final decorative touches Monday morning. “It’s in the middle of a neighborhood known for its antique and art galleries, and we wanted to adapt [the shop] to that.”

Van Noten, known for serving biscuits and tea to editors before his fashion shows, said he wanted to create an ambiance akin to an apartment and also give a nod to the space’s former incarnation as a bookshop.

He said he was undaunted by the fact that the location is outside the city’s usual shopping strips, such as Avenue Montaigne and Rue du Faubourg Saint-Honoré.

In fact, he said he saw being in the “wrong” neighborhood as an advantage since it sets him apart from other brands with which he doesn’t identify. “My vision for fashion is personal,” the designer explained. “I feel a crisis in the fashion system, with [an overabundance of] precollections, cruise, sales starting too early and the huge conglomerates oppressing [consumers] with advertising.

“I wanted to give a different answer,” said Van Noten.

Van Noten already has shops in his hometown of Antwerp and in Hong Kong, and traced the new boutique’s genesis to a search for a Paris showroom that began last year.

“I [told my team] that if we find something that’s big enough to be a shop as well as a showroom, then why not open a shop in Paris,” he explained.

Van Noten stumbled across a dusty former bookstore that, in reality, was too small to be a showroom — and even too small for a full-scale boutique. But he fell in love with it and purchased the space last July, even though it wasn’t large enough for both his men’s and women’s collections.

“Customers that like the anonymity of a department store won’t come here,” he said. ” You have to ring to enter this shop. It’s a different experience.”

Van Noten said he wanted to pay homage to a certain idea of Paris with the shop’s eclectic decor.

That meant buying a red bridge table that used to belong to legendary aesthete Charles de Bestegui and hanging photos snapped by Andre Ostier of the likes of Brigitte Bardot cavorting in costume at the late Baron Alexis de Rede’s famous balls at the Hotel Lambert.

In the so-called boudoir a yellow changing room has lattice-covered walls, and a stairway is covered in a leopard print fabric Van Noten described as a wink to the late Parisian decorator Madeleine Castaing.

Most of the merchandise is spread over two rooms, both of which have a view across the Seine to the Louvre museum.

The first room is based on a library, with a mezzanine that will be packed with clothing as well as myriad decorative bibelots, none of which will be for sale. A large 1920s Murano chandelier hangs from the ceiling, and other flourishes are a 17th-century Flemish cabinet and a 1956 oil painting by Marc Mendelson.

The second room is homier, modeled on a salon; merchandise hangs in a massive black Neoclassical cabinet on one wall and on a more conventional rack on another. Yellow silk curtains hang in front of a window that leads to a courtyard, and a giant abstract canvas by Pierre Alechinsky anchors the decorative scheme. The room has a 1950s Dunbar sofa and a console by Jules Wabbes.

“It was fun shopping for the store,” quipped Van Noten, who said that, though it reflected his own taste, the store was “a little empty” compared with his jam-packed home in Antwerp.

Van Noten said he had no plans for other stores. But he let slip that he would like to find a space in the City of Light to house his men’s collection. And he’s still looking for a showroom.