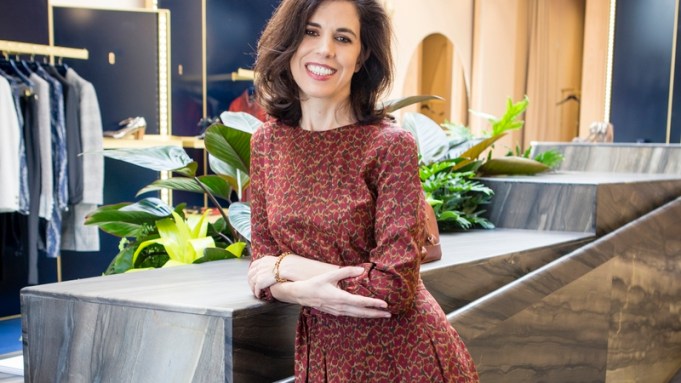 LOS ANGELES — Vanessa Seward stood at the bow of her Melrose Place boutique, asked to smile for a photograph in her new store.

Her first Vanessa Seward store in the U.S. opens Wednesday on a street that includes APC, Zimmermann, Isabel Marant and The Apartment by The Line — Los Angeles. It’s a street filled with a number of brands she shops or identifies with, which made the choice to debut her first U.S. store in Los Angeles an easy one, the designer said.

“We were hesitating between New York or L.A. first and it’s true, this location made perfect sense,” Seward told WWD. “I see the way the girls dress here and my take on comfortable Parisian glamor I think, I hope, it can really work.”

While the designer is eyeing New York for another possible door in the future, she is set to open a boutique next to Ralph Lauren on the Boulevard St. Germain in Paris in September followed by a store in London as early as November.

The Melrose Place space, totaling over 1,000 square feet, houses Seward’s ready-to-wear, denim, accessories, shoes and custom jewelry collections. The store design by French architect Laurent Deroo draws from many of the elements in Seward’s existing stores including the midnight blue used in lacquered display paneling. The store is accented by brass light fixtures and anchored by dark marbled stone floors, the richness of which is offset by a skylight covering nearly the entirely ceiling in a nod to Southern California. Seward’s husband, composer and producer Bertrand Burgalat, curated the music that will be played in store and during a special dinner Wednesday evening to celebrate the opening.

The clothes, a mix of the summer and fall collections, hang along the store’s perimeter.

“It’s superchic; I’m over the moon,” Seward said of the store and the business, which has taken off in a very rapid fashion.

The partnership with APC and its founder Jean Touitou has helped, with the company lending the young brand the back end functions and strategic expertise on the business side, along with an investment that gave APC a majority stake in the brand.

It’s been an organic career trajectory for Seward, who spent nine years at Chanel, followed by Tom Ford, Yves Saint Laurent and Loris Azzaro. It was in 2012 that the Buenos Aires-born designer began working with APC on a capsule and then delivering a new one with each season thereafter before turning to focus on her own business in 2014. Her namesake collection for fall was unveiled in March 2015 in Paris.

The brand is now in about 50 doors and has two of its own stores in Paris.

The line is often referred to as retro, a label Seward doesn’t necessarily find accurate but understands why the term has often been affixed to her designs.

“I don’t do it on purpose, meaning I think there is something because I do like the glamor of the Seventies. But I don’t try to be literal about it because I like when things are timeless,” she said.

As she walked a visitor through her collections, she called out its simple shapes, with flattering cuts meant to accentuate a women’s femininity. That’s even translated into a limited-edition T-shirt made for the boutique’s opening, which reads “La me voila.”

The pronouncement of the arrival of her Parisian chic brand is more subtly on display in the breezy dresses and blouses using prints sourced from the archives of Swiss textile company Les Soieries Abraham, trenches, reversible capes and long skirts Seward said she favors for their versatility with flats or heels.

“The first collection I had done for winter, I had done an Abraham print with a green four-leaf clover, which had really been a success,” Seward said. “We sold out immediately when it arrived in boutiques and now I’m like, ‘I have to create my own codes being a new brand.’ After working in Chanel nine years, I realized it’s good sometimes to insist on certain things because then it becomes part of your identity. So I’m insisting on the four-leaf clover.”