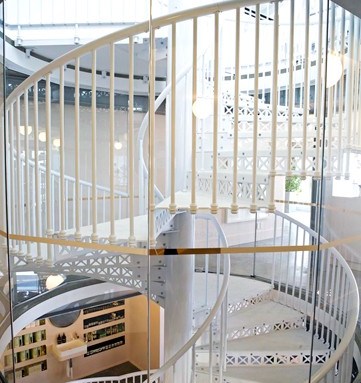 Last spring, New Zealand officially emerged from its longest recession in more than 30 years. But although many retailers are still hurting, a raft of recent boutique launches hints at hope on the horizon. To wit, one of the country’s most ambitious fashion, beauty and lifestyle retail concepts to open in recent years: The Department Store.

Located in the affluent North Shore beachside suburb of Takapuna, a short drive from New Zealand’s biggest city of Auckland, the three-level, nearly 14,000-square-foot emporium is a joint venture among the country’s best-known fashion export, Karen Walker; hairstylists Stephen Marr and Lucy Vincent-Marr, and retailer Dan Gosling. Gosling is one-third of the Auckland streetwear label Stolen Girlfriends Club and owner of multibrand boutique Black Box in Grey Lynn, a neighborhood on the outskirts of downtown Auckland.

The building, a former post office, already had been smartly renovated by Takapuna developer Dave Donaldson. It had been empty for two years when Donaldson approached Walker last year. From the time a retail concept was first mulled by Walker and Vincent-Marr—“over a cup of tea and haircut,” says Vincent-Marr—to the October 27 opening, was just seven months.

“When we first saw the space, we felt it could work, but only if there was a group of like-minded stores opening at the same time to create a mini neighborhood of stores. The two we felt were the most important, Black Box and Stephen Marr, loved the space and saw the possibility immediately,” says Walker, whose ground-floor boutique is her sixth retail outlet in New Zealand.

She adds, “Once they were on board, Mikhail [Gherman, Walker’s husband, business partner and creative director] came up with the concept of coming together under one roof as a cooperative, rather than a group of individual stores, and creating something bigger than the sum of the parts. Then it was just a matter of filling in the gaps to make the retail experience we’d all always wanted to exist.”

Also on board is Black Box, which sells, among other brands, Stolen Girlfriends Club and Australia’s Ksubi and Claude Maus; The Tea Room cafe; Simon James’ interiors and lighting section; a book shop, and a pop-up store that rotates every three months. Flotsam & Jetsam’s bric-a-brac was the first to be showcased in the pop-up. The top floor also houses a pop-up gallery. In the first quarter, an exhibition by New Zealand artists Derek Henderson and Michael Parekowhai, curated by galeriste Michael Lett, is on tap.

In spite of the challenging economic climate, the Marrs report they have had one of their best years in business.

“There have been a few subtle changes in the way our clients spend, but on the whole, our customers don’t want to start taking risks with their appearance,” says Vincent-Marr.

Although it’s still early in the game, initial sales have exceeded expectations. “Since the opening, it has also drawn people to the area, which has benefited other businesses around us,” notes Gosling. “Now is the time for slow, steady growth. Concentrating on New Zealand and Australia is the easiest to do, as the markets are close and quite similar. Also, [they’re the] same seasons. The Department Store is a great way to tell a story of how you want your brands to be represented.”

Adriana Barra, Brazil’s queen of prints, has opened a store in São Paulo’s Jardins fashion district that looks like a cross between a specialty shop, a boutique hotel and a greenhouse.

Barra previously owned a store that had an artificial stream running through it, but this new 3,800-square-foot boutique, opened in September, trumps that one in the nature department. All three street-facing sides of the two-story, Forties colonial house are covered in 15 varieties of potted, computer-irrigated tropical plants. A wrap-around blanket of green surrounds the building—and this distraction has increased the number of traffic accidents at this busy intersection.

A long, pine-paneled entry leads to an anteroom that resembles the foyer of a boutique hotel—sofa, armchair, throw rug and wall shelves sporting decorative bric-a-brac. The anteroom leads to a 40-foot corridor where Barra’s most recent collection of 200 colorful and inventive prints hangs on golden bellman trolleys. A multicolored caftan features a print of tribal- and Art Nouveau–inspired birds frolicking about, while a cobalt kimono dress features trompe l’oeil prints. Lining the corridor are small armchairs upholstered with more Barra prints.

“My collection sells well because my prints are vibrant, original and light in spirit,” says Barra. “It’s a buoyant look that appeals to young and young-minded women.”

Dressing rooms are done up like shower stalls, with copper tubing holding the curtains and faucets for hanging clothes. On the first floor is an open kitchen where an in-house baker prepares pastries for clients. On the second floor are housewares—bed linens, throw pillows and vases with Barra’s prints and flower-print sofas—for sale.

Tokyo-based cult brand Undercover has some new retail digs in its home city.

This summer, the label relocated its Aoyama flagship a few doors down within the same building and renovated the interiors.

Undercover designer Jun Takahashi and interior designer Kazuya Sasaki collaborated to give the more than 2,000-square-foot store an industrial feel with exposed ceiling frames and concrete walls. Some 15,000 lightbulbs dangle from the ceiling of the first floor, which stocks women’s apparel and accessories.

The basement men’s floor features metal shelving units by Dieter Rams and a large window overlooking a miniature patch of grass and a tree.

Rams-designed audio equipment from Braun is peppered throughout the space.