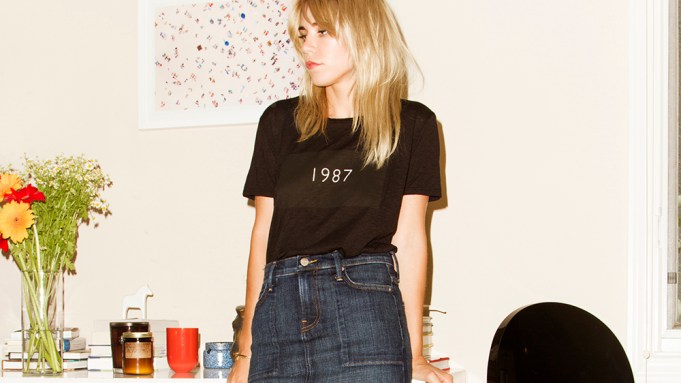 The power of the blogger in a marketer’s tool box is hardly fading.

Take as an example Culver City, Calif.-based Velvet by Graham & Spencer’s upcoming capsule collection with Always Judging blogger Courtney Trop. The line is set to go on sale in mid-February amid a ramp up for the company of its brick-and-mortar retail.

Working with bloggers is not something new for Velvet, which has worked with Trop for the past few years. A capsule seemed like a natural progression of the relationship and is also expected to help draw a new customer to the brand, Velvet director of public relations and social media Lu Spriggs said.

“We’ve been trying over the last few years to diversify our customer base,” Spriggs said. “We have a core Velvet customer who we love, but we definitely wanted to branch out and reach a slightly more fashion-forward and younger audience.”

Trop, in her late 20s, lends a sophisticated viewpoint that mixes high street with designer labels and a current residence in Los Angeles with an upbringing on the East Coast, Spriggs added.

The capsule totals five pieces and includes a dark denim skirt, boyfriend jeans frayed at the hem, denim top, worn-in graphic T-shirt and a peasant top. The items will be priced from $85 to $170 and will be sold in the company’s online and brick-and-mortar stores.

Velvet has already drawn in a core customer base with a wide age range, from the late 20s to the 50s. These are women with high disposable income and a more casual look that integrates a few fashion-forward influences, Spriggs explained.

The company said its collaboration a few years ago with Victoria’s Secret model Lily Aldrige, on spring and fall collections, was successful and the latest with Trop is viewed as a next step in the company’s marketing strategy. It also has plans to ramp up work with East Coast Prosecco & Plaid blogger Jessica Ann Kirby, although the specifics of those projects have not yet been worked out, Spriggs said.

The collaboration with Trop comes amid a ramp up in store growth for the company this year.

A store in London is set to open this month at St. Christopher’s Place. That comes on the heels of the May opening of a store in Southampton and another in New York on Madison Avenue, which bowed in late July. Those joined existing doors in California in Brentwood and on Abbot Kinney Boulevard in Venice.

The company’s also eyeing a store in northern California, potentially in Mill Valley or Palo Alto, Spriggs said. Velvet will have space at the much buzzed-about Platform project in its headquarters hometown of Culver City.

“It’s the way that the market is moving,” he said. “We have an advantage having our own brand and branding our own product is so, so important. It’s working well for us. The doors that we’ve opened thus far have been a major contributor to branding. We want to continue doing so across the markets that we cater to.”